Technology in present days has extended presence in all the sectors around the world. Many companies are investing huge amount of money to leverage significant economic and social opportunities from the digital economy.

As per a report from Data61, which is a segment of Australia’s national science agency CSIRO, over the next 10 years, digital innovation in Australia has the potential to deliver $315 billion in gross economic value. This sector would be a critical segment in the ongoing economic success of the country. As per the report, there are 8 strategic areas where Australia can attain success in developing new digital products or services. These include:

Australia has certain key features that support the potential of the country in creating, developing and commercialising new digital technologies. These include:

LiveTiles Limited (ASX: LVT) made two announcements in the last one week. The first was Q1 FY2020 update and the second announcement was related to equity raising of $5 million through a share purchase plan. 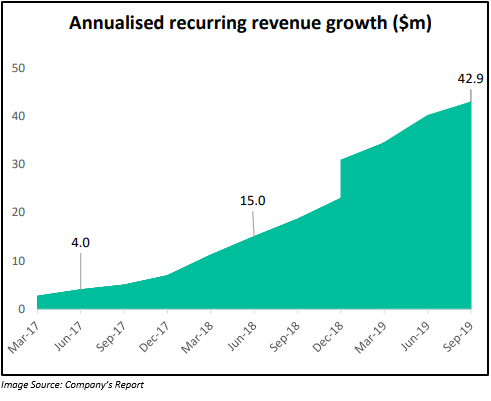 Capital Raising through SPP - On 16 October 2019, the company announced to have raised $5.0 million via a share purchase plan (SPP) from eligible shareholders. The funds raised would be directed towards generating continued strong customer and revenue growth.

Bigtincan Holdings Limited (ASX: BTH), recently on 2 October 2019, announced the closure of the acquisition of Xinnovation, Inc. (XINN), pursuant to the stock purchase agreement reached between Bigtincan, XINN and the latter’s shareholders.

BTH made a closing cash payment of ~US$4.437 million and issued 6,940,211 ordinary shares (fully paid) in its capital to the sellers, each at $0.537. The company will make a further payment of US$500,000 on or before the first anniversary of closing; however, the payment is subject to set-off of any amounts owed by the sellers to BTH.

XINN is a Boston based company whose product is a cutting-edge sales enablement and document automation platform, which caters clients in financial services. The XINN product helps in simplifying the process of automating presentations as well as collateral, thus delivering useful insights and allowing digital engagement. Some of the customers of XINN are Prudential, Mass Mutual and State Street Global Advisors.

In the recent past, ServTech Global Holdings Ltd (ASX: SVT) made two announcements. The first was related to the launch date of the Immersive VR Design Platform ‘FrameS’, while the other was the completion of the VR CAD Integration for Rhinoceros©.

On 10 October 2019, ServTech Global Holdings Ltd announced that it would commercially launch ‘FrameS’ in Europe in November 2019. It will be the company’s first step under its strategy towards building a global subscription-based software-as-a-service (SaaS) business model.

The launch is supported by distribution partnerships with Altea Federation, Four Bytes and Infor, targeted towards more than 6,700 customers, such as Ferrari, Gucci, Duracell, Maserati, and Agusta Westland. Apart from these companies, SVT is also targeting the growing software product design & manufacturing industry.

Rhino is a CAD software that offers its users with tools applied to model, document, and prepare designs for rendering, animation, manufacturing, etc.

During the period, NEA reported a 47% growth in total revenue and other income to $79.4 million as compared to the previous corresponding period, driven by continued customer retention and growth in the customer base. Moreover, revenue growth depicts growth in annualised contract value (ACV) of the group’s subscription portfolio.