Natural gas is capturing a significant share of global energy generation along with other fossil fuels, and the demand of the commodity is catching the attention post a decent growth of 4.6 per cent in 2018. As per many industry experts and market consensus, the demand for natural gas is anticipated to grow over lower double-digit growth till 2024.

The new International Maritime Organization regulation (IMO 2020) to curb sulfur in fuels could also propel the demand for the LNG, and the global stance to reduce the carbon emission footprints is providing an impetus to the alternative energy resources such as natural gas.

Natural gas is a cleaner alternative in the energy generation sector, and the industrial use of the commodity is forecasted by industry experts to grow over 3 per cent annually till 2024.

Australia significantly captures the supply side of the LNG; however, the recent development over the shale gas resources in the United States could also witness strong exports figures in the coming years from the nation.

Natural gas is one of the main energy sources in the United States, and in 2018, over 90 per cent of the domestic consumption was fulfilled by the local production. The adoption of horizontal drilling and hydraulic fracturing techniques provided explorers with a high production capability, which in turn, led towards a substantial increase in the United States domestic natural gas production. 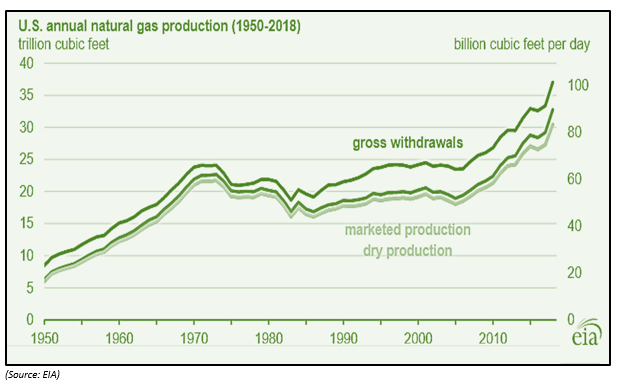 The higher production finally surpassed the domestic consumption in the United States in 2018, and the surplus was directed to the international market, which in turn, increased the exports from the United States substantially.

As per the data, the domestic consumption of natural gas in the United States reached a record level of 82.1Bcf per day, which in turn, underpinned an increase of 10.0 per cent; while the gross withdrawals (production measure) averaged at 101.3Bcf (billion cubic feet) per day.

Natural gas usage in the united states captures a substantial share for the energy generation, while the industrial usage of natural gas captures the second most significant piece of the pie. The production of natural gas in the United States witnessed a gradual increase from 2016 when the total output stood at 32,592Bcf.

In a nutshell, the production and consumption both witnessed decent growth in 2018; however, the production surpassed the consumption, which in turn, prompted the United States to export its natural gas in the international market. 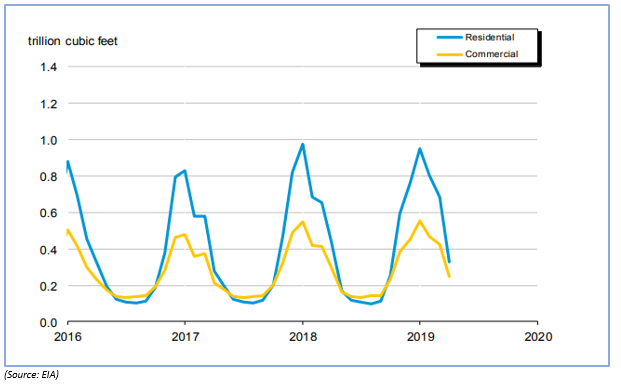 The industrial and energy usage of the natural gas, which captures a large share of the domestic consumption also witnessed a decline. 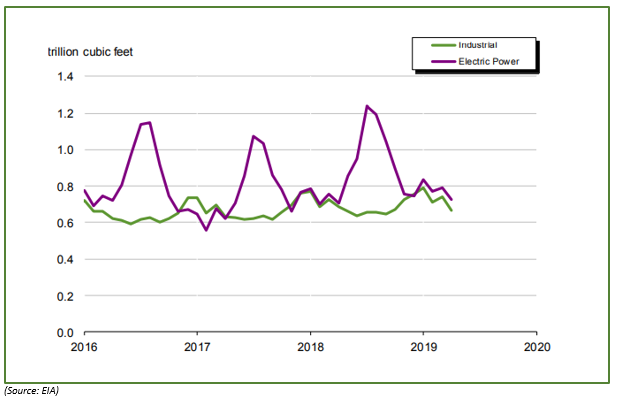 Over the decline in the domestic consumption amidst the high production, the United States is in the position to continue to act as a net supplier of the natural gas, and the United States Energy Information Administration (or EIA), which recently downgraded its crude forecast anticipated that the domestic dry gas production in 2019 could surpass the previous year production by 8.0Bcf per day.

The organisation further anticipates the United States average natural gas production to mark an increase of 1.4Bcf per day by 2020.

Over the biased demand and consumption scenario, the United States could hold the potential to land its natural gas in the international market, which in turn, could place the nation among the top net supplier of the natural gas.

The EIA further anticipates that post witnessing an increase of 1.1Bcf per day in 2019, the natural gas usage in the electricity generation could decline by 0.8 per cent in 2020 amid higher prices.

The energy sector and the industrial sector dominate the domestic natural gas usage and a decline in consumption could further boost the United States exports in the international market.

The EIA further expects that the natural gas usage in the residential and commercial sector would average similar to 2018 levels, and the consumption would be relatively flat in 2019 amid estimate of unchanged total heating degree days compared to 2018 in the years ahead.

The anticipated decline in the domestic usage over the industrial, electric, residential, and commercial sector and further estimates of higher production is a crucial factor in determining the possibility of the United States to stand among the top exporter of the natural gas in the international market.

The overall export from the United States averaged at 3.9Bcf per day in 2018, and over the net rise in the pipeline export to neighbouring Canada and Mexico, the United States now is a labelled net exporter of natural gas from being a net importer previously.

In a nutshell, the overall increase in production capacity along with the forecasted additional production capacity, and a forecasted decline in domestic consumption,, the United States would likely to hold its status as a net exporter of natural gas, and the nation could further sit among the top suppliers of LNG and natural gas such as Australia and Qatar in the global supply chain.