Cyclical Companies are companies that are sensitive to the business cycles, such that they thrive in periods of economic boom and decline during the recession. These companies pay bonuses and conduct hiring en masse in good times and implement employee layoffs and cuts to compensate during bad times.

Cyclical companies offer luxurious goods and services instead of absolute necessities in comparison to non-cyclical companies. These companies can benefit during the periods of economic upswings as consumers spend lavishly on luxurious items. However, they generally suffer during an economic downturn when consumers focus on essential commodities.

Companies indulged in the production of durable goods, like heavy equipment and raw materials, are usually cyclical. Consumer discretionary sector is also highly sensitive to the business cycle as people purchase consumer discretionary goods with discretionary income. Consumers often cut discretionary expenses from their budget during a period of hard times. The other industries that benefit from the high disposable income of consumers include real estate, travel, entertainment, financial services, energy, resources, etc.

Cyclical stocks are generally referred to as the shares of the cyclical companies. The prices of these stocks tend to be more correlated to the systematic changes in the economy. These stocks follow the cycles of an economy during expansion, peak, recession, and recovery. Investment in cyclical stocks can help risk-taking investors take advantages of growth opportunities in a boom market.

On the other hand, non-cyclical or defensive stocks are usually steady during periods of economic weakness. Such stocks are not impacted by the fluctuations in the economy and so are less volatile. Investors with lower risk tolerance may prefer investment in non-cyclical stocks as they are less volatile. The demand for the goods and services of non-cyclical companies remain stable irrespective of the health of the economy. Some of the sectors classified under non-cyclical industries include telecommunications, healthcare and utilities like water, electricity and gas.

A global provider of innovative and cost-effective travel solutions, Corporate Travel Management Limited (ASX: CTD) is headquartered in Australia. The company’s travel solutions cover loyalty, corporate, wholesale, events and leisure travel. The company has grown into one of the world’s most successful travel management companies since its establishment in 1994.

In May this year, the company strengthened its senior management capability to support its continued development. The company informed that its current Global CFO, Steve Fleming, would now focus directly on the European operation and expansion strategy as CFO, Europe. The company is currently looking out for new Global CFO. Mr Ewen Crouch AM was appointed as the new chairman of the company in March 2019, on retirement of previous Chairman.

The company announced its 2019 half-year financial results in February 2019, reporting a growth of 21 per cent in underlying EBITDA to $64.6 million relative to the previous year. The revenue and the Total Transaction Value (TTV) were up by 23 per cent and 31 per cent in the half-year to $212.2 million and $2,951.5 million, respectively. The Statutory NPAT attributable to owners of CTD was up 27 per cent to $38.9 million during the period. 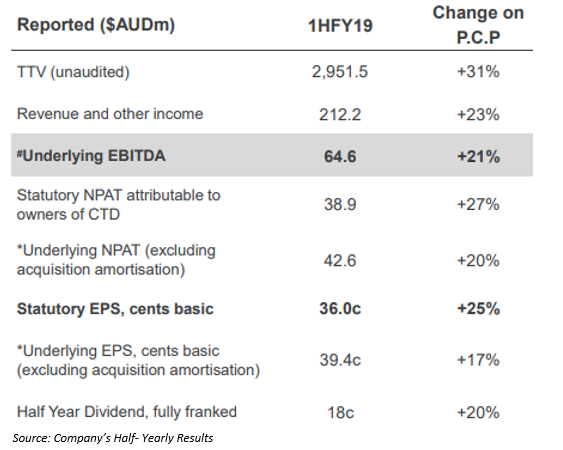 In its recently released investor presentation, the company mentioned that it has now become a global company with the majority of profits generated from offshore. The company has forecasted the Total Transaction Value as $6.5 billion for FY19, representing under 1 per cent of the total global corporate travel market. The company has targeted 15% p.a. organic growth over FY20-21 (mentioning that any M&A would be additional).

The company’s stock settled the day’s trade at AUD 22.810 on the ASX (as on 19th June 2019), with a rise of 0.53 per cent in comparison to the previous closed price. The market capitalisation of the stock was recorded at AUD 2.46 billion at the time of writing the report. The stock first traded in December 2010 on the ASX and has generated an enormous return of 1318.64 per cent since then. However, it has delivered a YTD return of just 6.58 per cent.

Operating as a refiner, importer and marketer of fuels and lubricants, Caltex Australia Limited (ASX: CTX) is a proud and iconic Australian company having a network of around 2,000 Company-owned or affiliated sites. The company has grown to become the nation’s leading transport fuel supplier with an aim to fulfil the fuel and other business needs of its customers using its networks.

In its 2019 first quarter results, the company informed that the shutdown of the Lytton refinery FCCU unit was successfully completed during the quarter. The refinery is now operating at its full capacity, informed the company.

Caltex Australia also completed its $260 million Off-market Buy-back in April 2019. The company bought back 11.1 million shares at an average price of $23.43 per share.

On 9th May 2019, the company announced its 1Q 2019 results which were in line with the update provided in March 2019. The company reported that its Fuels & Infrastructure EBIT (excluding Lytton) stood at $104 million, lower than the related EBIT of $106 million in 2018.

The average Caltex Refiner Margin in April 2019 was above the first quarter 2019 average of US$7.53/bbl at US$10.96 per barrel, with margin recovering in April from prior lows. The convenience retail EBIT was down from $90 million in 1Q18 to $40 million in 1Q19. The company reported that the retail fuel market conditions were promising, and its business performed well in April in terms of volume, with the market remaining competitive.

The parent company of a general insurance group, Insurance Australia Group Limited (ASX: IAG) has its controlled operations in Australia and New Zealand. The company sells insurance under many leading brands like Swann Insurance and WFI (Australia), and has interests in general insurance joint ventures in India and Malaysia. The businesses of the Group underwrite around $12 billion of premium per annum.

In its 1H19 operational results, the company mentioned that it had a sound performance in Australia owing to lower NSW CTP profitability under the capped scheme. The business segment saw an improvement due to increases in cumulative premium and remediation benefits, as well as more normal large losses. The company also performed well in New Zealand, reporting solid GWP growth of 5.5 per cent supported by sustained margins in 1H19. 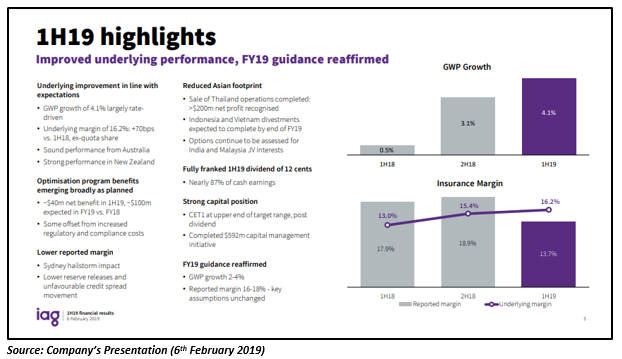 The company has maintained its FY19 GWP growth guidance at 2-4 per cent. The company expects the growth at a slightly more subdued pace in 2H19 owing to a planned reduction in NSW CTP rates and lower growth in workers’ compensation GWP. The FY19 reported insurance margin guidance has been reaffirmed by the company in the range of 16 to 18 per cent, followed by the improvement in underlying insurance margin in 1H19. The company does not expect any material movement in foreign exchange rates or investment markets in 2H19.

IAG settled the day’s trading session at AUD 8.040 (on 19th June 2019), up by 1.52 per cent relative to the last closed price. Around 5.3 million shares were traded today. The market capitalisation of the company currently stands at AUD 18.3 billion. Since the commencement of trading on the ASX, the stock has delivered a return of 124.18 per cent. Performing quite well in 2019, it has generated a return of 14.62 per cent on a YTD basis.