Uncle Sam is Recovering Albeit at Slow Pace

United States has started breathing again as most of the states have lifted public health measures to some extent. Businesses have largely reopened under conditions such as social distancing, mandatory masks, and clean/disinfected surfaces.

States that have opened similar venues, but only in certain parts include California, Michigan, Illinois, New York, Oregon, Pennsylvania, Tennessee and Washington. Besides, New Jersey has embraced limited reopening and the current orders expire on June 15.

US economy, like most of the economies in the world, has taken a large hit that happened in record time, wiping all the gains that were created through decades of policy initiatives, economic growth and investments.

But the recent social unrest in the country could be prompting stores to remain closed as protestors take a violent stance. Some of the protestors have caused destructions and looting in many areas. Since March lows, the US stock markets have now recovered substantially.

Rise in unemployment has been massive

As per the Bureau of Labor Statistics, unemployment rate rose to 14.7% and total non-farm payroll employment fell by 20.5 million in April. Heavy job losses were experienced in leisure and hospitality. During the month, the rate of increase in unemployment was the highest ever month over month in the history of series.

Number of unemployed persons increased by 15.9 million, taking the total to 23.1 million. Increase in unemployment reflects measures undertaken by the Government to limit the spread of the virus. Also, labour force participation rate decreased by 2.5 percentage points to 60.2% over the previous month, marking the lowest number since January 1973. 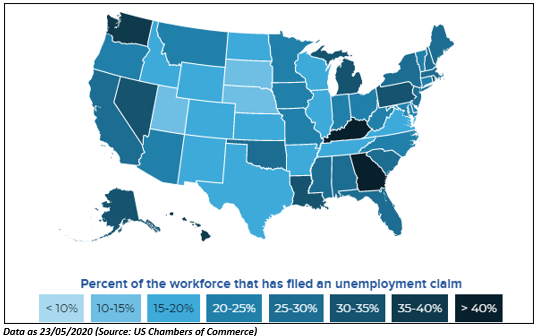 Most of small businesses are open now

US Chamber of Commerce has reported that around 8 out of 10 small business are fully or partially open now. This result comes from a small business survey conducted by the agency. Over half of the small business (55%) believe that normal business conditions would resume over the next six to twelve months.

A little over 40% of the small businesses have responded with a concerned stance on the business impact arising out of the pandemic. A month earlier, 53% of the owners had similar views, and two months ago, it was 58% of the owners. Major concerns of small business owners revolve around financial distress, lower demand and a potential second wave of the virus outbreak.

Over half of the businesses (56%) are comfortable with existing cash flow situation. Owners are now more optimistic about future revenues and cash flows. 50% of the businesses expect an increase in revenues next year, but around 19% have a conviction that revenues would be lower. Both of these parameters have improved over the previous month.

Since people have started travelling again and goods are being transported, it indicates that real economy is returning to some kind of normal life. Investors are chasing transport stocks now assuming that travel demand will likely return. Areas that are gaining traction in the US markets include consumer stocks, airlines and cruise but not limited to areas likes trucking and railroads.

The Institute for Supply Management has recently reported non-manufacturing PMIs, which increased to 45.4 from 41.8 in April. Although reading below 50 indicates contraction, increase over the month suggests that the service sector is coming back on track gradually.

The manufacturing PMI also reported an increase, climbing to 43.1 in May from 41.5 in April. As COVID-19 has halted supply chains across the world, indices experienced drag on supplier deliveries as delays from producers impacted the businesses.

COVID-19 has caused a large contraction in the US economy, but the states are embracing re-openings gradually. A slight increase in economic activity bodes well for labour market conditions that have been the centre of attraction in this crisis.

CLICK HERE FOR YOUR FREE REPORT!
Tags:
Recovering Albeit