Letâs unbox the earnings and financial and operational updates of these stocks.

Incorporation of the world-renowned information giant Google took place in California in September 1998. Later in August 2003, Google underwent a re-incorporation process. In the year 2015, Alphabet became the successor issuer to Google through the implementation of a holding company reorganisation.

Alphabet announced results for its second quarter of 2019 (quarter ended 30 June 2019), reflecting improvements in core information products, momentum across Googleâs businesses and innovation that is fuelling its growth.

The above table can be read as follows: 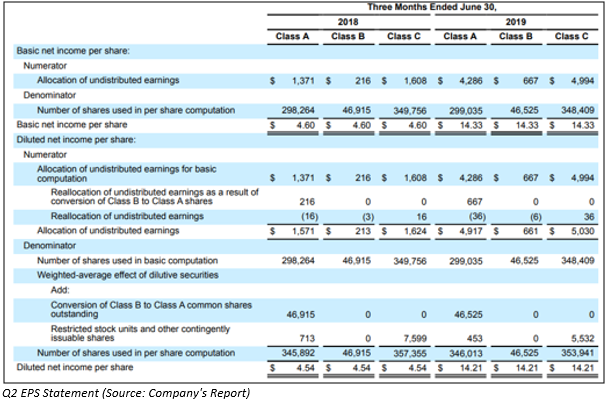 During the quarter, Googleâs fundamental product, Search, underwent a number of enhancements. In addition to this, Google also redesigned the mobile Search page and induced the Full Coverage feature to Search for improved organisation of news results. Google is currently working on the integration of augmented reality into its Search product.

Google also brought forward new additions to its Hardware product line by launching Pixel 3a and Pixel 3a XL. Google carries the potential to deliver its users a premium phone experience at a much lower price on the basis of its leading software competences.

Google believes that the demand for its home products is accelerating, along with the expansion of the company to fresh markets. The company gives the credit of such impressive performance to its ongoing strength in mobile search, including YouTube and Cloud.

As per the company, the conference call to discuss the third quarter 2019 financial results of Alphabet is scheduled to be held on 28 October 2019.

Let us now talk about another global trend-setter organisation.

As a leading developer of software systems and applications, Microsoft Corp. (NASDAQ: MSFT) strives to propel every individual and every organisation of the world to achieve more through its innovation.

During the quarter, Microsoft paid dividends and repurchased shares, amounting to $7.9 billion. The amount reflects an increase of 28% as compared to the previous corresponding period.

Talking about revenue reported by Microsoftâs verticals, revenue in productivity and business processes amounted to $11.1 billion and increased by 13%, including the following business highlights:

Next, revenue in Intelligent Cloud amounted to $10.8 billion and increased by 27%, including the following business highlights:

Lastly, revenue in More Personal Computing amounted to $11.1 billion and increased 4%, with the following business highlights: