At the time when the Australian economy is in the midst of several challenges due to historic low interest rates, US-China trade war concerns, subdued inflation and struggling property market, investors might be interested in predicting the Australian economic outlook. Considering this view, let us look at two key stocks from the consumer discretionary sector listed on the Australian Stock Exchange:

The Australian-based Think Childcare Limited (ASX: TNK) offers exceptional education and quality care for Australian children. The company manages, operates and owns around seventy-eight long day childcare facilities for children between the age group of six weeks and six years in Australia. The company seeks to become the “Employer of Choice” in the Australian Childcare Sector.

On 14th August 2019, the company notified that it has entered into a Scheme Implementation Deed with TNK’s wholly owned entity, Think Childcare Development Limited (TND). Under the Deed, both TNK and TND will form a stapled structure with a view to secure and enhance TNK's development pipeline by bringing the incubation and development function of new greenfield trade-up leasehold childcare facilities under TND. The company mentioned that TNK’s fully paid ordinary shares will be stapled to TND’s fully paid ordinary shares under the stapled structure.

The company has recently reported its first-half financial results for FY19 and notified that it is on track to achieve 2019 guidance and operating model to support long-term growth. The Underlying EBITDA of TNK improved by 67 per cent from $2.5 million in pcp to $10.2 million during 1H19. The service performance of the company was 50 per cent higher than the prior year, driven by higher days of learning from the 2H18 acquisitions. TNK recorded a strong cash position at the end of the period with $9.1 million cash and $42.5 million facility headroom. 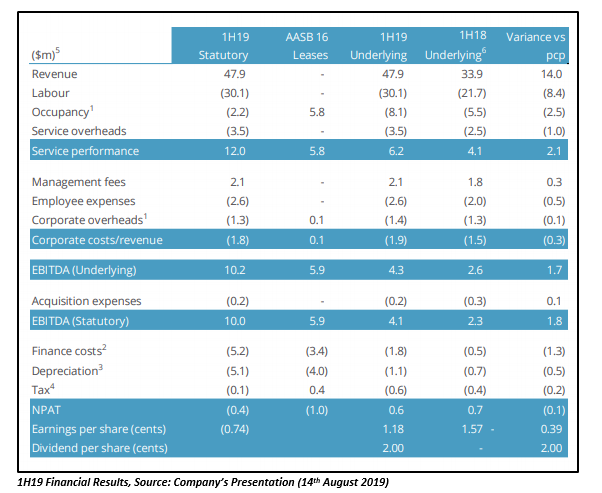 The company achieved 13.5 per cent of total return during the first half of FY19, incorporating its franked dividends since the IPO. It has also determined a fully franked interim dividend amounting to 2 cents per share for a period of six months, payable on 20 September 2019.

TNK believes that its 1H19 service performance was slightly below expectation. The company has maintained its Underlying EBITDA’s guidance range between 13.8 million and 14.8 million. The project Elevate activities (uncommitted) have been deferred until CY20 in order to bed-down initiatives rolled-out in 1H19. TNK has planned to complete 6 acquisitions in 2H19, 5 services from incubator 3 and 1 from incubator 4. The company is on target to complete capital improvement works and launch 14 priority services in 2H19.

The company has recently declared a fully franked dividend amounting to 8 cents for its ordinary fully paid securities, payable on 5th April 2019. The dividend carried an ex-date and record date of 14th and 15th March 2019, respectively. The distribution was related to a period of six months, ending on 31st December 2018. The company also had a Dividend/Distribution Reinvestment Plan (DRP), with a DRP Price of AUD 3.10160 and DRP discount rate of 2 per cent.

The announced dividend was in line with the company’s proportionate dividend policy, wherein the dividend is 75 per cent of NPAT.

During the financial year ending 31st December 2018, G8 reported an Underlying CY18 EBIT of $136.3 million which was below the last year’s Underlying EBIT figure but was in accordance with the company’s management guidance. The average occupancy in CY18 was also 1.9 per cent points down to 74 per cent on a like?for?like basis. The company generated an operating cash flows of $105.9 million during the period.