After the market close on 28 January 2020, TWE has released profit guidance for the first half of FY20, which is subject to audit review, and expects to report 2020 interim results on 13 February 2020.

Chief Executive Officer, Michael Clarke, stated that the company has slightly missed its own expectation in first-half 20 for EBITS, and the growth rate in FY20 would be lower than what was previously guided.

It was noted that the company has experienced underperformance in the US market during the first half of the financial year, which is likely to continue in the second half due to:

TWE believes that the first-half 2020 underperformance could not be made good in the second half of FY20, and it expects that this would not be repeated in FY21. As a result, the company would continue to grow profits sustainably, however, at slightly lower rates than previously expected.

It would emphasize on restructuring of the US management team, renewing momentum, and devising strategies to manage the US and global commercial wine operations distinctly from each other.

TWE intends to tackle the new market challenges without giving up on the premiumization strategy. And, it continues to grow its Luxury and Masstige business across each region, including Asia, ANZ, EMEA and the Americas.

It was noted that the company’s premiumization strategy continues to drive the results across all regions with net sales revenue (NSR) from the Luxury and Masstige segment increasing 7 per cent during the first-half 2020.

The composition of NSR from Luxury and Masstige segment has reached 73 per cent of the group NSR, while the commercial volumes declined 10 per cent globally due to suppliers moving products to private labels, especially in the US and Australia.

In the Americas, the regional volumes fell 6 per cent due to declines in Commercial portfolio, which was partly offset by growth in the Luxury volume that posted a growth of 7 per cent.

The benefits from the company’s flagship premiumization strategy were offset by the discounts given by the company in a bid to maintain share in the market. And, further impact was added due to higher COGS on domestically sourced commercial wine and the US sourced luxury wine.

In Asia, the company saw EBITS growth of 19 per cent to $175.5 million at an EBITS margin of 43.1 per cent, which improved 4.2 ppts. This result was driven by robust demand and consistent outstanding execution across key markets. 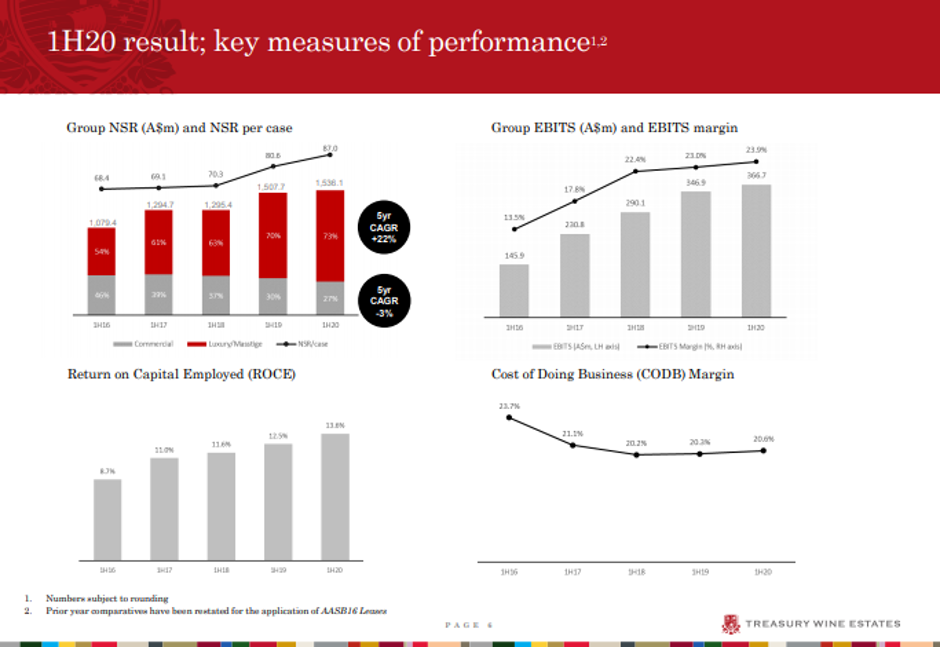 Despite strong performance across key metrics, the volume was impacted due to a reset in the distribution of a large client, and the company continues to invest in ramping up distribution, brand building and organisational capabilities.

In ANZ, TWE recorded 10 per cent improvement in EBITS at $85.9 million with an EBITS margin of 26.4 per cent, which improved 3 ppts. Despite resilient result, the company witnessed declines in commercial volumes and temporary changes in the buying patterns of key retailers in the Luxury portfolio.

In EMEA, the company witnessed a per cent fall in EBITS at $32 million with an EBITS margin of 16.8 per cent, which deteriorated by 0.3 ppts. Premiumisation led gains were normalised by higher COGS on Australian Commercial wine.

During the first half of 2020, the company achieved a cash conversion of 85.1 per cent, and financial metrics were sustained to maintain investment grade credit ratings.

It was said that the company’s premiumisation strategy and a global footprint has underpinned the delivery of strong results amid some market challenges, and it is looking to continue execution of its strategy.

The investments by the company in the recent years places it to deliver sustainable results and margin accretive growth for the future.

It was noted that a strategic review of the business is underway presently, emphasising on improving returns from premiumisation strategy and managing commercial wine business distinctly.

The strategic review is anticipated to be completed in the second half of 2020, and more details would be reported around or after full-year results of FY 2020.

In Australia, the recent natural calamities like drought, heat and fires created some expected challenges related to the cost of the 2020 Australian vintage that is being harvested presently.

The final impact on the Australian Vintage harvests is not yet determined. However, the company’s multi-sourcing model and past inventories, enable a flexibility to manage vintage headwinds.

In FY 2021, the company anticipated that reported EBITS growth would be in the range of 10 per cent to 15 per cent, which considers continued premiumisation and growth in Luxury wines, balanced against the US market disruption and 2020 Australian Vintage cost impacts.

Also, the FY 2021 target excludes the initiatives from the strategic review, that would deliver meaningful benefits as per the company’s conviction.

More importantly, the company has reported announcing a fully franked dividend of 20 cents per share for the interim period, equating to an increase of 11.1 per cent over the first-half 2019.