AUSTRAC, the financial intelligence agency of Australia, has raised alarms for money remitters, pubs, clubs and fintech companies to increase the security in their technology systems with the intention of helping them in protecting organised crime.

Last week AUSTRAC ordered PayPal to investigate issues with its international transaction reporting. Nicole Rose, the chief executive of AUSTRAC, has cautioned the companies involved in gambling and other money-handling industries to prevent money laundering, as they could be targeted if they evade from their responsibilities.

Let’s have a look at three fintech companies in Australia that have delivered good returns in the last one year.

About the Company: Zip Co Limited (ASX: Z1P) is one of the top players in the payment industry and digital retail finance. It offers point-of-sale credit and digital payment services. The market capitalisation of the company stood at $1.69 billion as on 2 October 2019.

By acquiring Spotcap ANZ, Zip would have a proven and market-leading underwriting capability with 4 years of credit portfolio performance data and deep learnings that will be extracted from commercial bank’s transactional data.

Zip completes debt funding deal: Zip has priced its first issuance from the Zip Master Trust. The deal, which was arranged by NAB, was oversubscribed and was closed at $500 million (earlier mandate being $400 million)

FY19 Financial Highlights: The company reported a revenue of $84.2 million, up by 138% from FY18, reflecting growth across all important segments. Transaction volumes increased by 108% to $1,128.5 million. During FY19, the company saw significant growth in all the segments as compared to the previous year:

About the Company: EML Payments Limited (ASX: EML) provides ground-breaking financial technology, which delivers solutions for incentives and rewards, gifts, pay-outs, and supplier payments. It also issues virtual, mobile, and physical card solutions to some of the largest corporate brands across the globe. The market capitalisation of the company stood at $1.1 billion as on 2 October 2019.

Segmental Performance of the Company: 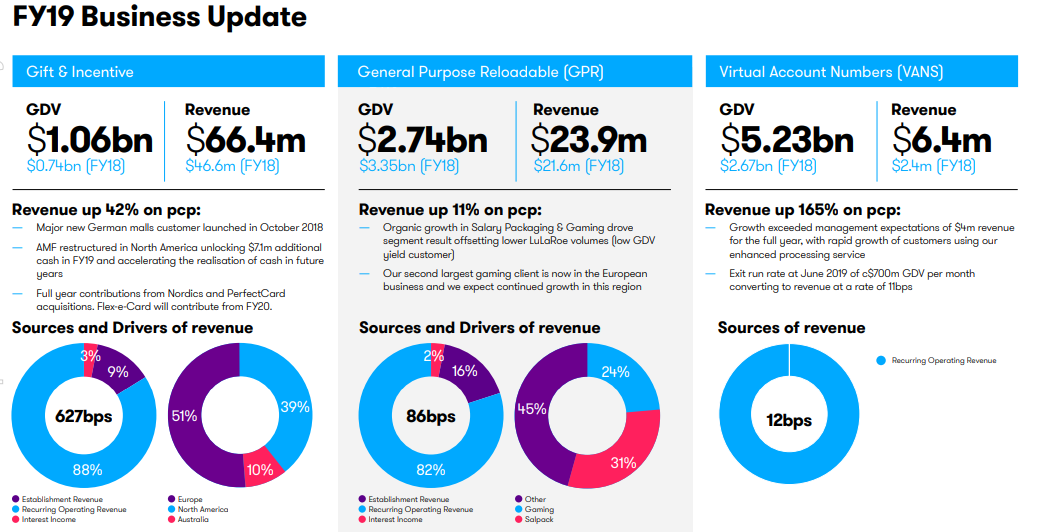 About the Company: Afterpay Touch Group Limited (ASX: APT) is a tech-driven payment company with global customers. Afterpay has over 35,300 active retail merchants and more than 5.2 million active customers on board. The market capitalisation of the company stood at $8.92 billion as on 2 October 2019. 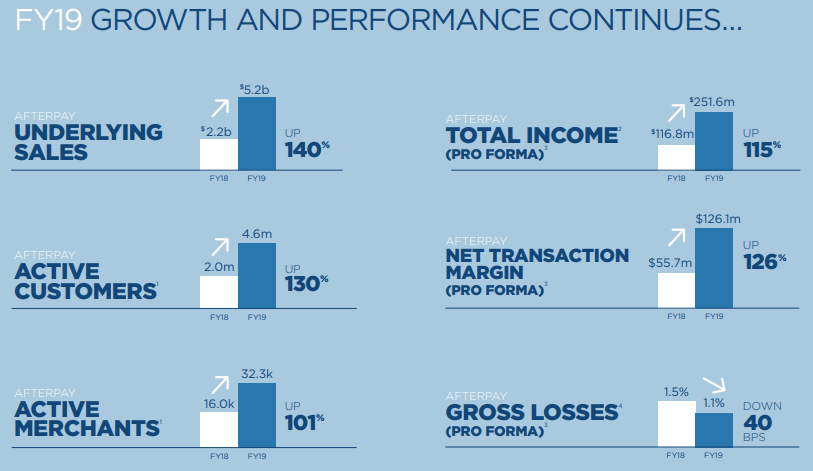 Capital Management: The company successfully raised $317 million in late FY19 through equity and established US$300 million dedicated US receivables warehouse facility which has solidified Afterpay’s balance sheet to scale and compete globally. The warehouse facilities of the company ($947 million) were fully undrawn and provide capacity to meaningfully scale underlying sales and improve ROE.