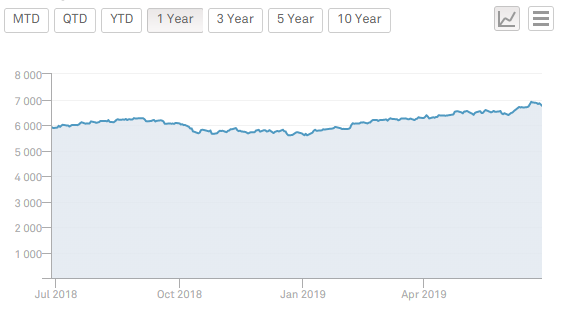 On 28 June 2019, Cardno Limited reported an update related to the FY19 guidance. In conjunction with the announcement, it was announced that the guidance is consistent with previous guidance where expected underlying EBITDA (FY19) was estimated to be ~A$60 million. Furthermore, the company has been recording encouraging financial results predominantly from the Americas, Construction Sciences and International Development divisions along with newly acquired Raba Kistner and TGM during 1H FY19. Importantly, the escalated results helped to offset the underperforming financial results in the Asia Pacific division compared with prior years.

In addition, Cardno Limited expects to include an impairment charge of ~ A$ 48 million for the year ended 30 June 2019; this impairment charge relates to the carrying value of the domestic Asia Pacific division’s intangible assets, predominantly goodwill.

In February 2019, the company reported half-year results for the 31 December 2018. According to the release, the underlying EBITDA of $27.9 million down by 7.6% in H1 2019 compared to $30.2 million in H1 2018; this was due to the challenges in Asia Pacific and investments in international development. Also, American Engineering division performed well with 11.7% growth in revenue against the previous corresponding period; additionally, the division’s EBITDA also grew from 3.6% to 4.5%. In addition, the Asia Pacific revenues were down by 1.5% compared with the previous corresponding period, and EBITDA margin contracted from 9.1% to 5.9%; this had been impacted by the roll off of a number of major projects in 1Q18 along investments to ramp up business development. Furthermore, the Net Profit After Tax was at $7.7 million in H1 2019 up by 135.2% compared with a loss of $21.9 million in H1 2018; H1 2019’S net profit after tax also included acquisition cost of $2.8 million, write off on existing borrowing cost on debt finances of $0.5 million and $0.6 million of tax effect of underlying adjustments. 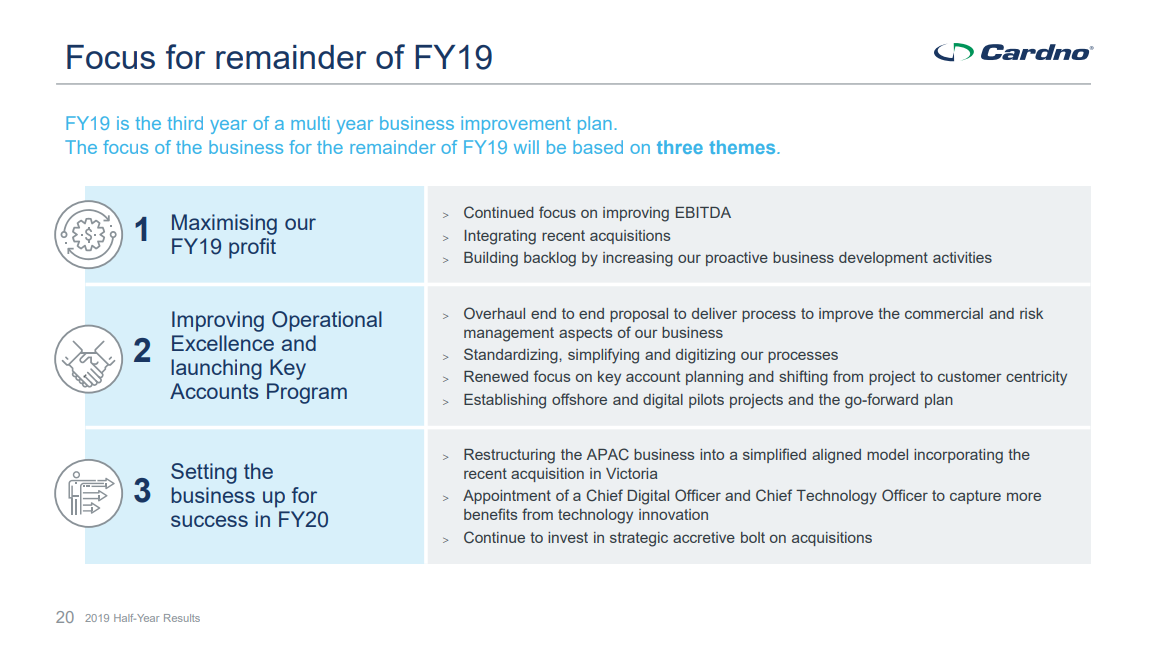 In December 2018, the company reported the completion of the acquisition of Texas-based Raba Kistner Inc, which employees ~470 people and provides specialised engineering services in Construction Materials Testing, Geotechnical Engineering Consulting, Project Management etc. Further, the consideration included an upfront purchase price of US$42.5 million along with performance-linked payment over the next three years for $12.5 million.

In accordance with the release, the pricing of the notes was concluded on 26 June 2018, and the expected settlement would be by 03 July 2019, subject to customary closing conditions. Also, the proceeds from the transaction would be swapped with fixed rate AUDs and would be utilised for the general business to fund the development pipeline. Furthermore, the notes would be ranked equally with the existing senior secured debt with maturity in July 2034. 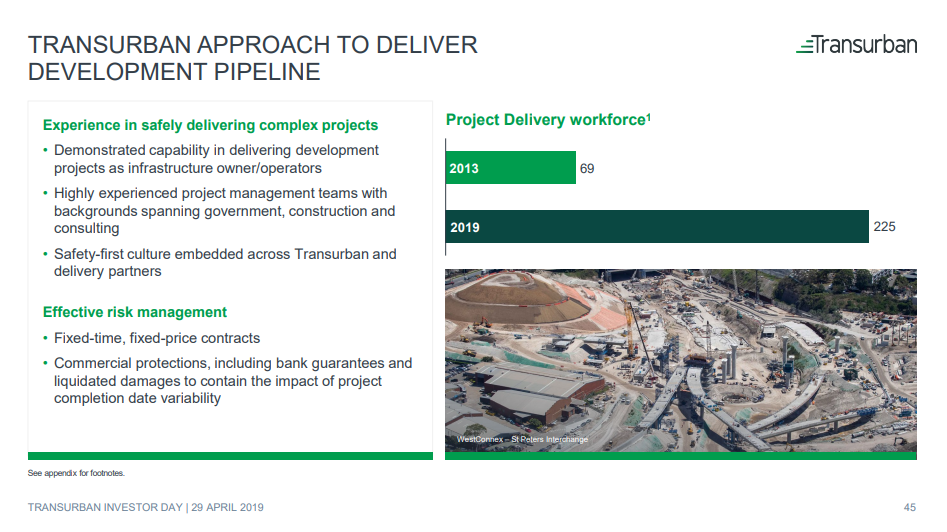 On 21 May 2019, the company announced a dividend of 30 cents per stapled security for the six months ending 30 June 2019; this dividend equates to the 28 cents contribution from the Transurban Holding Trust and controlled entities and 2 cents fully-franked dividend from Transurban Holdings Limited and controlled entities. Concurrently, the recent dividend distribution takes the FY19 total distribution to 59 cents, which includes 3 cents fully franked component.

It was also reported that the tax-deferred component would be confirmed in Tax Statements to be issued with the final distribution in August 2019. Also, the Distribution Reinvestment Plan (DRP) is being offered for the distribution for six months ending 30 June 2019, and no discount would be applied. Further, the Board also determined the DRP pricing period, which is 10 days starting from 4 July 2019. According to the release, Ex-Date was 27 June 2019, Record Date is 28 June 2019 and Payment, and DRP allotment is scheduled on 9 August 2019.

On 10 May 2019, the company had priced €600 million of senior secured 10-year notes under its Euro Medium Term Note Programme through the company’s financing vehicle Transurban Finance Company Pty Limited. In accordance with the release, this tranche of the notes had been priced on 9 May 2019, and the proceeds from the bonds would be utilised in refinancing the existing bank facility, funding for the development pipeline and general corporate purpose. In addition, the notes were ranked consistently with the other senior secured debt facilities, and these notes would mature in May 2029.

On 17 June 2019, Downer EDI Limited & Works Finance (NZ) Limited provided updates on the terms of ROADS preference shares. Accordingly, it was reported that the dividend rate on ROADS (Redeemable Optionally Adjustable Distributing Securities) preference shares for the period 15 June 2019 to 15 June 2020 (next reset date) is 5.49% per annum payable quarterly in arrears. Furthermore, the dividend rate equates to a one-year swap rate of 1.44% per annum along with Step-up margin of 4.05% per annum on 17 June 2019. Downer EDI expects that the dividends would continue to be fully imputed.

On 11 June 2019, the company released a Presentation- Downer Group site tour, which briefly touched on the Road services and Rolling Stock service of Downer EDI. Below is a description of those services from the presentation:

Some of its highlights and services from the business includes Detritus Processing Facility in Sydney and Green Vision recycling in Auckland, which is owned, managed and operated by Downer EDI, and it also manages 58,000 kilometres of the road network in Australia & New Zealand. In addition, the road business also produces 3.1 million tonnes of asphalt per annum and provides specialist asphalt surfacing to most of the Australian racetracks of international standard.

Rolling Stock Services: The company’s passenger rolling stock services provide a significant and growing base of long term, high-margin asset management contracts; this is also underpinned by the relationship with the world’s largest rolling stock manufacturer in CRRC. According to the presentation, the business caters to the need of NSW Government, Victorian Government and WA Government through 624 Waratah Rail Cars (NSW), 455 HCMT Rail Cars (VIC), 179 A/B Class Rail Cars (WA) and more. 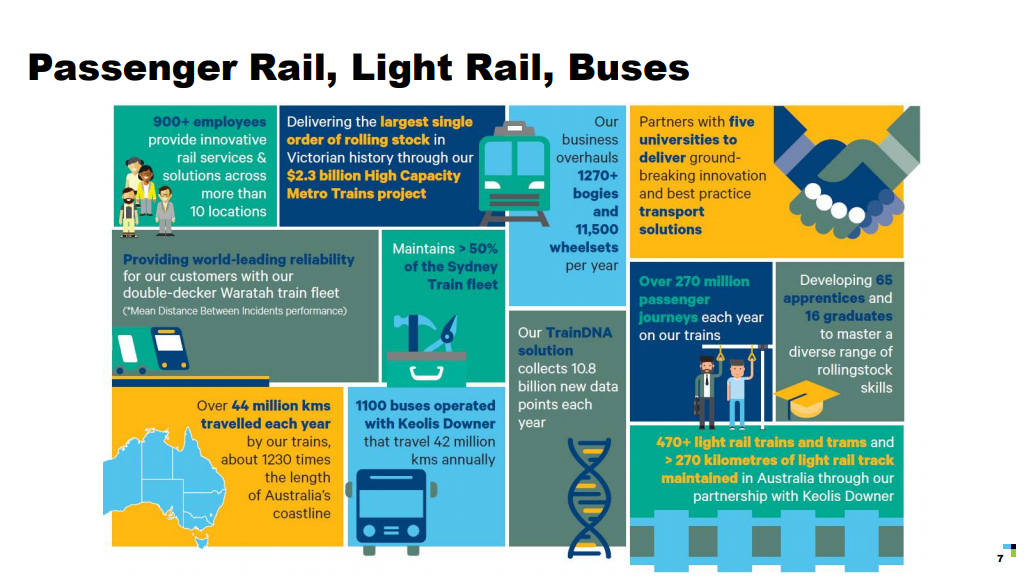