According to Michele Bullock, Assistant Governor (Financial System) at RBA,

âThe Australian payments system has undergone a substantial transformation over the past few decadesâ;

âMuch of this has occurred as competition between payment systems and participants, and improvements in technology have driven innovation in payment offerings to consumers and merchantsâ.

Moreover, Australia has witnessed a remarkable transformation in the payments industry with a greater number of players providing technology-driven, innovative and unique payments solutions. As stated by the NSW Government, Australian FinTech venture capital firms have expanded by 150% over five years.

With a strong supportive environment for the Fintech companies, Australia has witnessed remarkable growth not only in the number of Fintech businesses but also in the intensity of expansion and growth of these businesses.

Several businesses have already spanned into multiple countries with a significant number of active customer base in the domestic and international market along with getting listed on ASX.

One of the most discussed Fintech companies awaiting its listing on ASX is Tyro Payments Limited (Proposed ASX code: TYR).

Tyro lately announced the opportunity for the public to become a shareholder in Tyro Payments Limited through its IPO, for which the Prospectus was lodged with the Australian Securities and Investments Commission (ASIC) on 18 November 2019.

The company is offering to issue Shares equal to $0.125 billion. The number of Shares issued will be based on the Final Price and is in the range of 45.5 â 50.1 million based on the Indicative Price Range.

Just in time heads-up regarding the Offer is as below:

Important dates regarding the various proceedings of the Offer are given in the figure below: 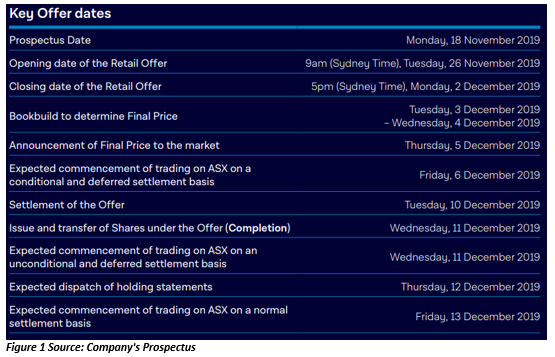 The Company looks forward to driving increased financial flexibility to propel the pursuit of its growth strategy, which includes:

For the shareholders, the Offer is anticipated to provide them with access to greater liquidity and secure other benefits that are expected to follow from the listing on ASX. 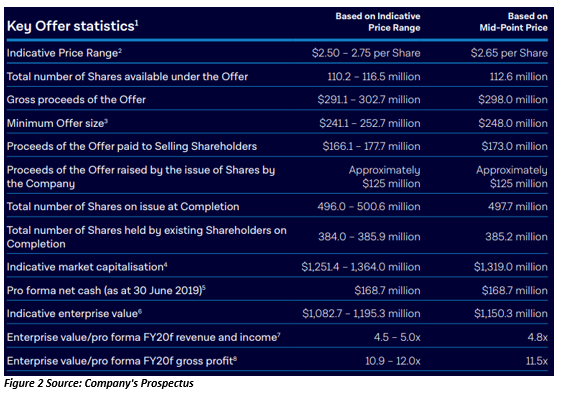 The Company was founded in the year 2003 and has since then maintained a track record of innovation, creating purpose-built solutions and being first to market in order to be the first technology company to receive an Australian specialist credit card institution licence in the year 2005.

The success of Tyroâs approach is reflected in the strong and continued growth achieved across its key measures of success like transaction value, revenue and number of merchants. During FY2019, Tyro achieved:

Further, Tyro also reported a pro forma EBITDA loss of $6.1 million in FY19, which is low as compared to loss of $7.4 million in FY18, representing the Companyâs ongoing investment to attract more merchants to its ecosystem, the investment in its team and its commitment to develop the payments and business banking products.

However, the Company clarifies that it may not be profitable in the Prospectus forecast period.

Tyro is focused on providing customer-focussed payment solutions that are customized to their business while making banking simpler and easier. The solutions provided by Tyro includes:

The Board of Directors of Tyro have expertise across financial services, technology, retail and health sectors accumulated through years of experience and current active and passionate engagement in the Companyâs business.

The BoD of Tyro comprises of:

With a favourable outlook supported by government policies and customer penetration, Tyro is currently facing exposure to a compelling opportunity for its growth. The increasing technology acceptability among the customers is expected to drive the progress of Tyro significantly. However, the game is getting stronger day by day with other players like Afterpay, who have progressed at an unbelievable pace and have further expansion plans as well.

CLICK HERE FOR YOUR FREE REPORT!
Tags:
Commonwealth Bank of Australia IPO fintech Fintech Sector Financial Services Tyro IPO Fintech companies Financial System ASX:TYR Tyro Payments Limited
All pictures are copyright to their respective owner(s).Kalkinemedia.com does not claim ownership of any of the pictures displayed on this website unless stated otherwise. Some of the images used on this website are taken from the web and are believed to be in public domain. We have used reasonable efforts to accredit the source (public domain/CC0 status) to where it was found and indicated it below the image.