Australia stands second in the global thermal export ranking. It exports almost ~75% of produced thermal coal in the country, shipping 210 million tonnes (Mt) worth $26 billion in FY19. Most of the earnings from export come from Japan, followed by China, South Korea, Taiwan and India, with New South Wales and Queensland being the primary producers in the country.

Operating mines and market destination as of FY19 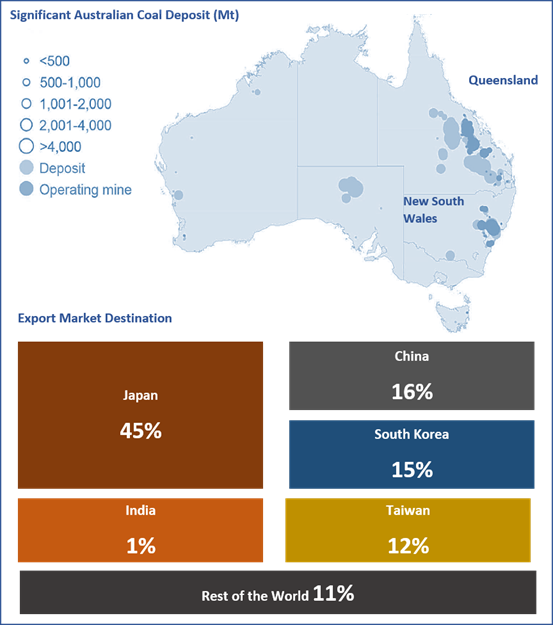 The thermal coal price, i.e. Newcastle benchmark index, is forecast to fall from US$74 per tonne in 2019 to US$72 per tonne in 2021 due to the falling demand in comparison to supply. Also, it is pertinent to note that apart from plunging demand, drop in LNG prices encouraged the switching of coal to gas, especially in Europe impacting the coal import in the country. The demand from Asian countries has also affected the coal price due to the decreased economic activity.

The coal sector has been one of the significant contributors of emissions right from mining to combustion emitting methane to SO2, CO2 and ash to mention few. Many developed countries are moving toward cleaner fuel policy hampering coal demand. Recently, BlackRock-an asset management company in the move toward sustainable development has started to remove companies from its portfolio that are generating 25% of revenues from thermal coal. The advancement is done with a focus on the renewable side, aiming climate-related initiative and developing sustainability culture in its business process.

However, this move is unlikely to majorly impact the coal business as major producers such as BHP Billiton (ASX: BHP) and Rio Tinto (ASX: RIO) hold maximum production and yet revenues from coal happen to be lesser due to the revenues coming from other metal and mining operations. Also, the demand fueling from the Asian economy will continue to rise due to the economic growth and renewable may not be capable yet to supply baseload demand.

The world coal trade is expected to fall in 2020 and 2021. The coal import from developed countries has declined due to the Government decision to remove coal-fired power generation. On the other hand, the Asian countries have expanded their conventional power generation using coal, maintaining the demand in the market. However, the import is anticipated to fall by 1% in 2021 from 2019.

Also, it is pertinent to mention that the increase in coal dust from Russia has boosted the Australian coal export to South Korea.

The surge in Vietnamese coal demand has benefitted Australia, resulting in increased export volume by ~3x to 13.58Mt in January-October 2019.

The global export is expected to fall by ~2.8% from 2019 to 1002Mt in 2021. The significant fall in trading is likely to be coming from the Americas and South Africa, where the critical source of the export growth seemed to be coming from Australia and Russia. 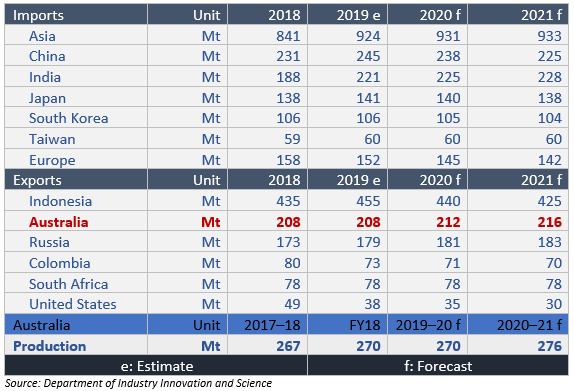 The demand coming from Asian countries and China is expected to increase the Australian export market by 8Mt to 216Mt in 2021 from 2018. The increased export demand is expected to be supported by the expansion, ramp-ups and productivity improvement of Australian mines.