‘Past teaches us not to repeat mistakes, however, whilst coming across a legit mistake; we shall accept the mistake in the first place and look out for best preventive measures for the times ahead.’

Amongst the major banks, Westpac has been in the headlines of dailies in the country, following an investigation by the financial intelligence agency and regulator – AUSTRAC, which revealed substantial counts of non-complaint transactions.

Less than a week into the revelation, the market participants were made aware that the Group Chief Executive Officer is set to step down from the role, effective from 2 December 2019, via an exchange release on 26 November 2019.

The release stated that Mr Peter King, current Chief Financial Officer, is going to replace Mr Brian Hartzer in the capacity of acting CEO. Also, Mr Gary Thursby would be taking up the role of CFO.

In addition to this major shuffle, Mr Ewen Crouch has decided not to seek re-election at the upcoming Annual General Meeting of Westpac. And, Chairman of Westpac – Mr Lindsay Maxsted has preponed his retirement to the first half of next year.

In a statement to exchange on 25 November 2019, Westpac said that it estimates to incur expenses of up to $80 million (pre-tax) in a comprehensive response plan released by the bank a day before. 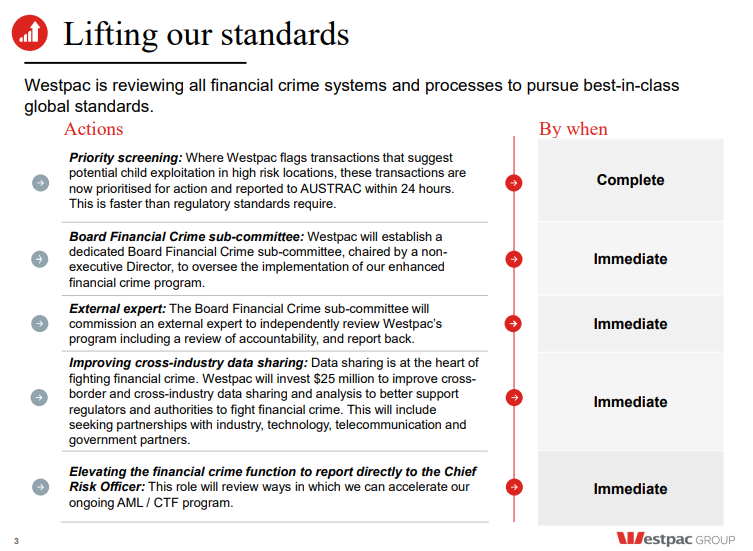 In response plan, the bank had completed a number of actions, including;

At the year-end 30 September 2019, the bank’s gross loans to customers were $718,378 million compared to $712,504 million a year ago, and the provisions for expected credit losses/impairment charges on loans were $3.6 billion compared to $2.81 billion in the previous year.

In FY 2019, the bank adopted two accounting standard AASB 9 and AASB 15, as a result, the comparative data have not been restated.

Despite these headwinds, the bank declared dividends of 174 cents per share compared to 188 cents per share in the previous year, representing a dividend pay-out ratio of 88.83%.

What has damaged the performance of the bank?

A decrease of 16% or $1.31 billion in net profits over the previous year was credited to notable increases in provisions related to expected customer refunds, remediation payments, associated costs with remediation, and litigation. In addition to these, and wealth business reset had dragged the profits of the bank to lower territories.

A similar reason was provided by the bank in relation to a decrease in net fee income. The bank said net wealth management and insurance income was decreased due to higher claims from severe weather conditions, cessation of grandfathered advice commissions, lower wealth management income, exit from Hastings business. In addition to these, the income was adversely impacted by provisions related to refunds, payments, associated costs and litigation.

In trading income, the bank has suffered fall in income on the back of a change in methodology for derivative valuation, which was offset by higher non-customer income.

In its CEO letter in Annual Report 2019, Mr Hartzer had voiced out a conservative tone, recalling the sluggish economic situation in the country. He mentioned that economic outlook for the country remains weak, backed by global trade issues, weak real wages growth, the softer housing market, low interest rates and subdued economic activity; all of this led to a suppressed consumer confidence.

He mentioned that regulatory outcomes from the Royal Commission had impacted the financial services industry. And, the regulators across ANZ are conducting various reviews, including home loan pricing, remuneration, risk-weighted asset methodologies.