The Global Economy Outlook 2020- Trends and Projections to Watch Out For!

In response, the vigilant central banks loosened monetary policy, and few were even a step ahead to deliver additional stimulus.

Though global financial conditions improved by the end of 2019, the rising debt level is still a dagger hovering over economies alike. At one end, a bane persists in the form of the ongoing conflict between the US and Iran and on the other, consumer spending across the globe seems to be a boon.

After a sluggish end to 2018, 2019 kept the rate of global economic activity pretty soft. Throughout the year, the global growth remained subdued with a soft inflation making headlines on and off. Few experts tagged 2019 as the year, in which the global growth recorded its weakest pace since the Global Financial Crisis (GFC) of 2007-2008.

But obviously, these consequences were subject to both across countries and country-specific factors. Let us browse through few vital events that would have possibly triggered this consensus together - 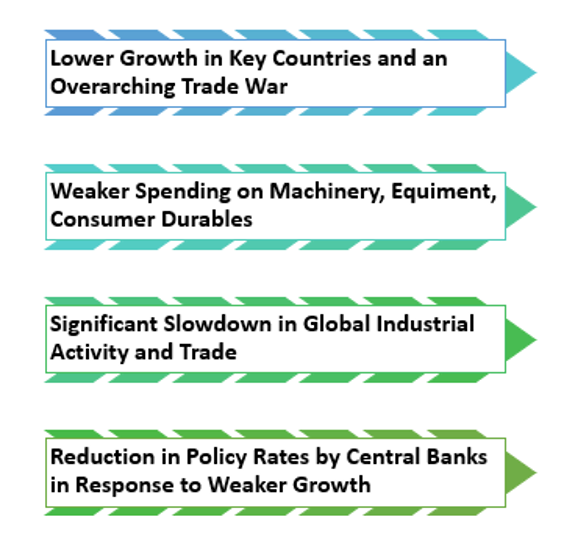 Besides this, one should note that the share market had a good year across the globe. A famous saying circles in the stock exchanges- bull markets climb their own wall of worry. And they did in 2019, with global exchanges rebounding at the back of the wave of central banks’ expansionary monetary policies (rate cuts, repo programs), which made equities strong.

The International Monetary Fund (IMF) has projected the global growth at 3 per cent for 2019, which is the lowest level since the GFC. However, growth is projected to pick up to 3.4 per cent in 2020, reflecting an improvement in global economic performance. Moreover, with trade tensions and monetary policy easing simultaneously, 2020 could possibly be the year, in which the global economy will take the path to recovery. 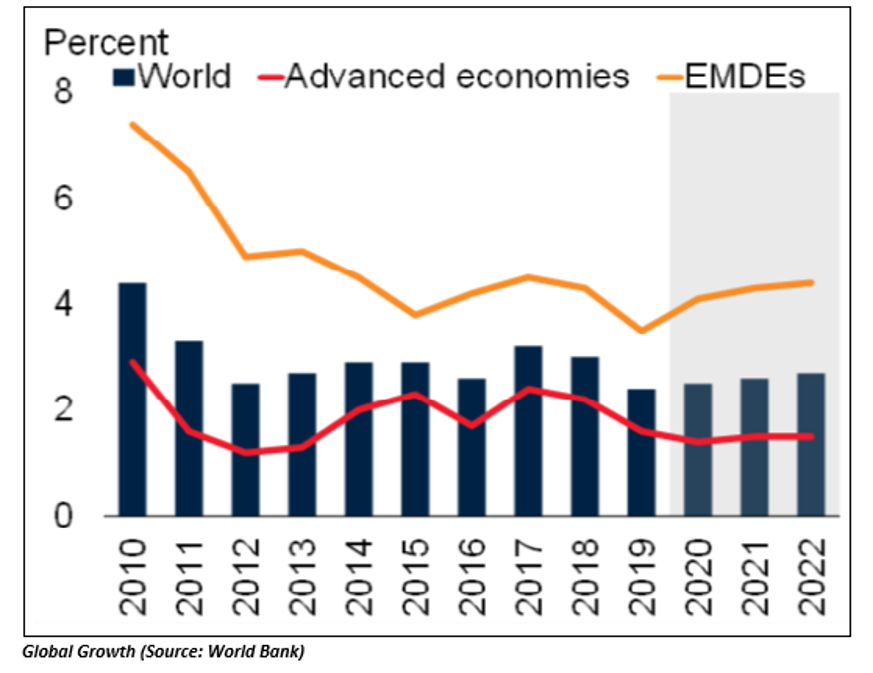 Events to Watch Out For

The overall growth in the global economy is catalyzed by the amalgamation of consequences that form due to micro and macro-level economic activities, which drive businesses, international trade relations and share market dynamics. Few major events that are prone to have an impact on the overall global economy 2020 are:

For even a moderate uptick to ensue, a lot of things need to go right. As the trends and projections depict, 2020 is going to be the year, where global economic growth is forecasted to edge up, and investment and trade are expected to gradually recover from the significant weakness of 2019. However, we live in a dynamic space and downward risks will continue to persist.

A continued softness in manufacturing might remain, which may partly impact growth among advanced economies to slip to about 1.4 per cent in 2020. This should convince policymakers to undertake structural reforms and improve broad-based growth. The structural reforms would also work towards poverty reduction eventually.

Moving onto other critical factors, the year has begun with the unprecedented hazard in Australia where blazing bushfires have claimed human, animal lives besides destroying several property structures in the region. This calls for a dire need to enhance environmental reforms and measures that safeguard the interest of our surroundings.

Moreover, debt management, the rule of law, policy improvements can help achieve sustained growth. There should be measures to rekindle productivity growth (investment in education and institutions being part of it).

Given it is just the first month of the year, it is safe to say that the modest global growth is the best that one can hope for. We have entered a new decade on a relatively stronger position than we did in the last. One cannot forget than it was the last decade that gave the world the GFC.

Currently, trade wars seem to be finally settling, and regulators worldwide have their constant vigilance mode turned on to ensure sound businesses.

Amid mounting debt and a slowing productivity growth, the modest pick up of 2.5 per cent in the global economy in 2020 is an indicator that better days may be coming, though risks have not ceased or disappeared completely. What should be given utmost importance is the fact that with a silver lining may finally appear after the feeblest 2019; it will be a huge onus on policymakers across economies to make sure that the recovery in prediction and sight thrives.