The Future of Energy Generation in Australia; Solar to Increase Three-Fold By 2024

The Rooftop solar capacity could account for almost one-quarter of Australia’s energy generation by increasing two to three-fold in 20 years to 2040- says the Australian Energy Market Operator (or AEMO).

The Future of the Australia Energy System

The energy market operator suggested that the national electricity market (or NEM) would evolve from a centralised coal-fired generation system to a highly diverse portfolio of energy generation across all the respective five scenarios, developed to cover plausible future that would depend upon the rate of change in tech, renewable, decarbonisation policies, and electrification.

The diversified energy generation portfolio is anticipated to be largely dominated by the Distributed Energy Resources (or DEM) and Variable Renewable Energy (VRE).

The small-scale distributed energy resources such as the rooftop photovoltaic panels across the residential, industrial, and commercial consumers are anticipated to double by 2040 as interest across consumers related to rooftop PV, and battery storage increases.

The modelling conducted by AEMO suggests that the Distributed Energy Resources could account from 13 to 22 per cent of total underlying annual NEM energy consumption by 2040, and such high indicated contribution would require dedicated management practices and protocols to maintain the system security.

The market operator also suggests that over 30 gigawatts of new grid-scale renewable would be required under all scenarios, except the slow change scenario. The 15 gigawatts or 63 per cent of the coal-fired generation in Australia is forecasted by the energy operator to retire by 2040. 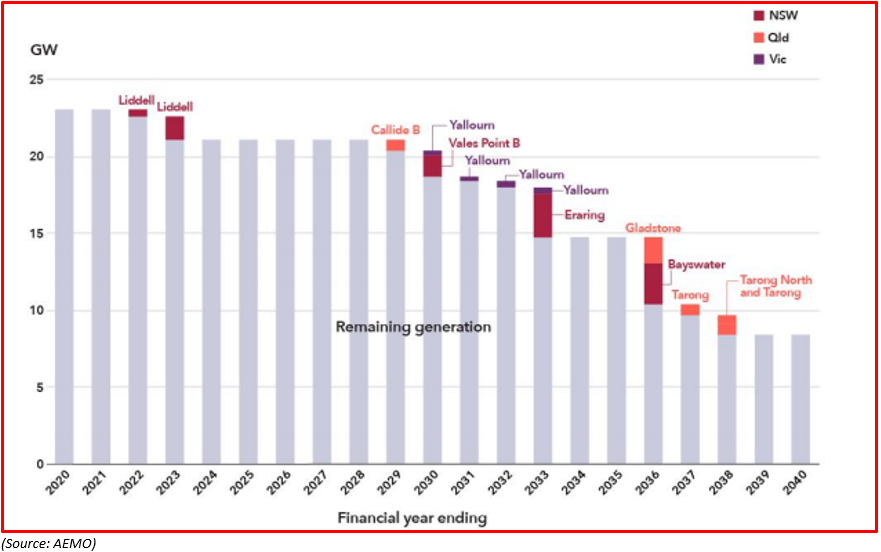 The retirement of each coal-fired plant would require the addition of other sources, which in turn, could support the higher integration of Distributed Energy Resources and variable Renewable Energy. The national electricity market would require an anticipated addition of 34 gigawatts of VRE under the Central Scenario, 30 gigawatts for High-DER, and 37 gigawatts for fast change.

As mentioned above the DER (rooftop PV) is projected to increase up to 13 to 22 per cent of total underlying annual NEM energy consumption; however, the efficient market and technical integration are anticipated by the AEMO for the projections. The efficient integration is needed for the effective and secure operations of the DER investments.

The increase in DER coupled with the estimated higher efficiency and local storage would keep the grid demand more or less constant till the projected period (2040) despite the growth in population and economic figures. 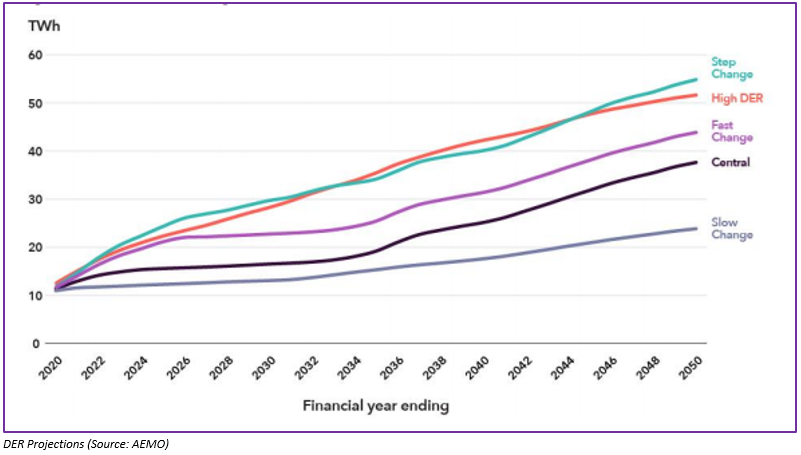 Despite the anticipation of a constant grid demand, the AEMO suggests that Australia should go ahead with 30 to 47 gigawatts of large-scale VRE, which is most optimally to be placed in Renewable Energy Zones (REZs).

Presently, there are 6 gigawatts of VRE installed across Australia, and AEMO anticipates additional installation of 6.5 gigawatts in next two years, and as mentioned above, AEMO projects the requirement of about 34 gigawatts of VREs by the end of 2040 in addition to the existing capacity, under the Central Scenario.

A Slowdown in Coal-Fired Power Generation 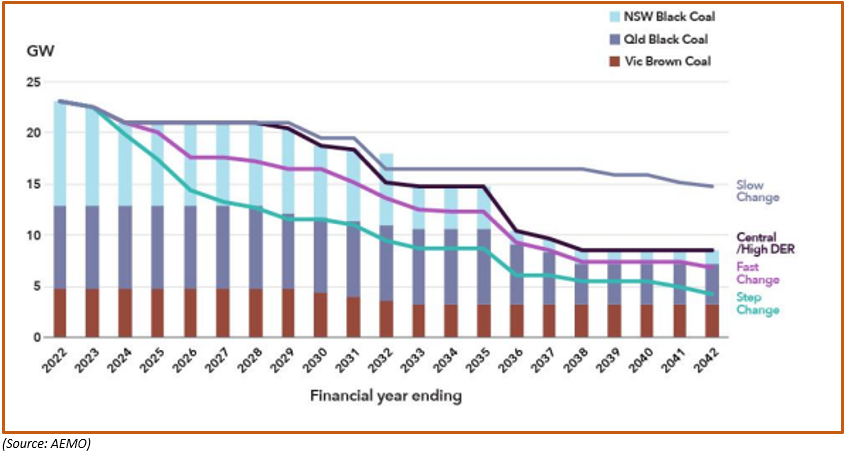 Gas-powered generation, which holds the potential to synchronous generation needed to balance the variable renewable supply, would take inputs from the relative cost and availability from variable storage technologies.

The AEMO anticipates the gas consumption to vary substantially on a yearly basis depending upon the weather events such as extreme temperatures, droughts, and prolonged outages in thermal generation.

In the modelling case, the AEMO projects the gas-powered generation to initially decline as the gas price increases before ultimately rising as the coal-powered generation retires. The southern gas reserves are in decline, which would require further development from 2024 to ensure that the supply meets the demand.

Presently, many oil & gas exploration companies are underway to address the east coast gas crisis, with Senex leading the frontier with the Project Atlas.

The 2020 ISP further suggests that the new gas supplies along with associated infrastructure such as pipelines need to be discovered and developed to deliver over 200 petajoules of additional gas to the domestic market on a yearly basis between 2025 to 2037.

The supply of 200 petajoules would further help in meeting the demand from the residential, commercial, and industrial sector.

To summarise, the future of the Australia energy generation would circulate more around the higher generation from the Distributed Renewable Energy, mainly solar and winds, as coal-fired power stations come near to retirement.

However, to meet the rise in demand, sufficient additional infrastructure should be in place. Currently, the national electricity market is facing connectivity issues in the grid, which is expected to increase the blackouts in the peak summers.

To Know More, Do Read: Keep Calm as Summer Is Upon Us; Summer Blackout Fears Lift Origin Shares

The installation of the solar PVs across the rooftops is already witnessing an increase, with further installation expected to counter the daytime demand, and other alternative such as gas-powered generation is anticipated to fill the demand and supply gap during the evening.

The current infrastructure, coupled with anticipated inputs and plans to do so, clears one thing, that Australia would be energy ready to meet the growing demand ahead.