NBN Co, the Australian government-owned corporation responsible for DBO (design, build and operate) national broadband network, has given Australian citizens a pre-Christmas gift, confirming significant wholesale discounts and additional annual data capacity to meet customer demand. Aussies would be able to have access to more reasonable and fast broadband, provided retail service providers (RSPs) pass on the advantages of this new offering due for delivery over the next 2 years.

The media release of NBN Co’s Wholesale Pricing Review 2019 came out after five months of extensive discussion with RSPs as well as industry groups.

In order to address the price-sensitive segment, the company also modified the current 12/1 Entry Level Bundle rebate on 1 October 2019. As a result of which, the initial rate of $22.50 and the Connectivity Virtual Circuit inclusion of 150 Kbps stayed unaffected. However, additional charge applied to retail service providers in case the average monthly peak Connectivity Virtual Circuit application across ELB services on a CVC surpasses 150 Kbps, was trimmed down from $22.50 to $5.70 for each Entrance Level Access Virtual Circuit (AVC).

There has been more than double take up of the entry level bundle, following the implementation of the change.

At present, NBN Co is focusing on improving the customer experience, with the Wholesale Pricing Review 2019 further targeting 5 key areas, including

From May 2020, NBN Co would be rolling out 3 new wholesale high-speed tiers as well as related package rebates. 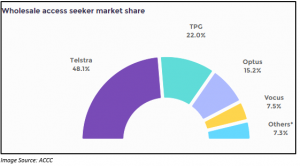 From July 2019 to September 2019, over 0.5 million new services were included by NBN Co. Currently, it is offering more than 6.1 million residential broadband services, as per the latest quarterly Wholesale Market Indicators Report of the ACCC. The report revealed growing number of wholesale access seekers getting connected through a direct medium with NBN at more NBN POI (points of interconnect). During the September 2019 quarter, there were a minimum of 9 different wholesale access seeker groups that directly linked to the NBN at all of the one hundred and twenty-one points of interconnect and 10 access seekers that linked at one hundred and nineteen of the POIs.

Of the various market players, Telstra Corporation is the leading acquirer of wholesale NBN services, accounting for more than 48% of the total connections. Optus has boosted its market share to 5.2%, while players like Vocus have reported a slight drop in their market share. Meanwhile, market share of small service providers is also improving, as they are steadily acquiring services in more locations.

Additionally, the adoption of higher speed plans by Aussies is also growing, with nearly 60% of all the services being higher speed services of 50Mbps and above.

Let’s look at the popular plans of major telecom players in Australia.

Telstra provides its customers with the below two NBN plans at minimum costs for internet when a customer stays connected for 24 months. The costs can change when the monthly plan price changes.

Vocus has built its own network. It believes that future companies would require cleverly designed, high-performance network to perform and compete. The company has established its network to give its customers the simplest way to improve business results. Vocus’ network, along with the NBN in Australia and the Ultra-Fast Broadband project (UFB) network in New Zealand, enhances its competitive status to deliver an array of services to the targeted market segments.