The four technology stocks have generated lucrative YTD returns for its shareholders. These stocks remained solid performers in its space among its peers. Let us have a detailed glance on how the stocks have fared in terms of financial performance along with the recent updates.

Megaport Limited (ASX: MP1) provides a platform to clients, which helps them to connect their network to other services. The company assists its customers to get connected to cloud services, managed services, and data centres almost instantly. 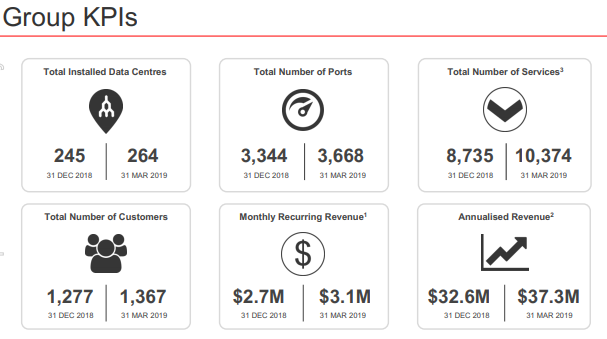 Among the key performance metrics in December 2018, Megaport achieved 1,277 customers across 386 enabled data centres in 82 cities. Of these data centres, 209 were in North America, 99 in Europe and 78 were in the Asia Pacific. Megaport’s North America region increased its MRR from $0.55 million, in June 2018, to $1.0 million in December 2018, representing an 80% uplift during the half-year.

Nearmap Limited (ASX: NEA) is a small-cap technology company. It has laid the platform for frequently updated and high-resolution aerial imagery. The company caters to several industries, including engineering, rail, construction, etc.

The company in the recent past have announced that it has launched a new product Nearmap 3D, which gives customers the ability to stream and export 3D imagery on demand at large scale through the web application called MapBrowser.

The performance of the company in 1H FY19 was in line with the expectations and witnessed strong growth in key metrics with the Group Portfolio Lifetime Value (LTV) exceeding $1 billion. The company is well positioned for future growth on the back of scaling of global opportunities, product enhancements, captured technology and machine learning research.

On the financial performance front, the Group ACV (Annualised Contract Value) portfolio increased to $78.3 million, recording a growth of 42% (Y-o-Y) post exchange rates adjustments. The growth was primarily driven by a strong rise in subscribers and the average subscription value. Revenue grew by 45% to $35.5 million in 1H FY19 over the prior corresponding period. The net loss stood at ~$1.97 million in 1H FY19, showing an improvement of 70% against the loss of $6.50 in 1H FY18, primarily due to a significant rise in revenue during the same period.

The balance sheet of the company remained strong without any debts other than corporate credit card facilities. The positive outlook for the business is enhanced by the recent capital raise, enabling Nearmap to accelerate its strategic objectives in pursuit of the considerable global market opportunity. 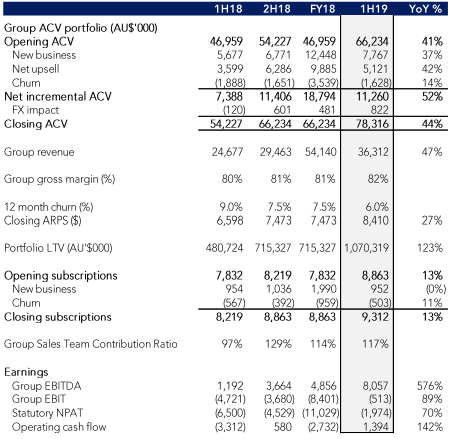 In H2 FY19, the company will enhance its products, with a range of releases to be rolled out to increase the workflow utility and customer stickiness of the MapBrowser platform. Given the disciplined approach with respect to capital management, the company reaffirmed its cash flow break even guidance for FY19, excluding the deployment of capital raise proceeds.

Zip Co Limited (ASX: Z1P) is a payment solution provider. The company is into providing digital payment services to merchants and consumers across several sectors. The range of sectors covered by the company includes health, retail, education & travel industries. The company has a range of Retail Finance solutions for businesses, both online and in-store. The two main products of the company involve ZipPay and zipMoney.

The company has recently announced an update on the performance it has achieved on the acquisition of zipMoney Holdings Pty Limited in the month of September 2015. The targets of the company include achieving $10 million in aggregate transaction volume within twelve months of re-listing, 20 million of aggregate transaction volume within twenty-four months of re-listing and achieving a pre-tax break-even over three consecutive months within thirty-six months of relisting.

Going forward in FY19, the company has an outlook to increase the transaction volume and customer growth targets and expand its Zip network. In addition, it would also work to increase customer engagement, capitalize on the favourable operating environment and funding diversification.

LiveTiles Limited (ASX: LVT) is engaged in the operations of sale & development of business software in Australia and other parts of the world.

The AI-driven data-centric security solution has been launched by the company in collaboration with its partner Nucleus Cyber. LiveTiles will sell and promote the solutions to enterprise customers as a premium feature of its (IWP) Intelligent Workplace Platform. The solution is capable of replacing a wide variety of existing user training, complicated configurations and security tools with a streamlined AI-powered solution which is more effective.

The addressable market for this type of security solution is significant and targets over 400,000 customer organisations and over 85% of Fortune 500 companies that leverage Microsoft’s SharePoint Online as part of their Office 365 subscription.

The ARR has more than tripled over the last twelve months to add $23 million. It is one of the fastest-growing SaaS companies globally. LVT completed the acquisition of Wizdom, Europe’s leading ‘plug and play’, Microsoft aligned digital workplace software business, in Feb 2019.

The company reported a healthy rise in customer numbers, growing by 153 on a year-on-year (up 34%) to reach 598 paying customers as at 31 December 2018. Of these, 39 customers contribute at least $100,000 (termed as large customers), up from 14 as at 31 December 2017. The Average ARR per customer was up 145% on YoY basis continuing its robust growth since past one year. The company has revised its guidance and as per the new guidance, LiveTiles’ objective is to organically grow ARR to at least $100 million by 30 June 2021. 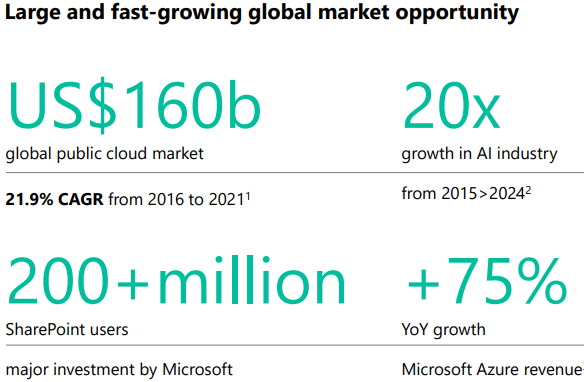 Overall, the financial performance across these companies remained decent. The investors might want to have a look at these stocks within the tech space. However, it is advisable that the investors perform a thorough and detailed analysis of these stocks in conjunction with their risk and return pay-off.