Storm Clouds on the Australian Economy

Australia is likely to witness the worst economic contraction since the Great Depression due to economic fallouts of coronavirus pandemic. Record lows in the shares market, massive job losses, disrupted sales of businesses and now falling house prices, the danger of the epidemic has already begun to materialise.

Australia has had 6703 cases of COVID-19 with a total of 81 deaths so far. The new number of cases have been slowing from more than 280 for a week to approximately 6, reflecting flattening of the coronavirus curve. With massive lockdown measures in place and a second coronavirus wave already affecting countries like China and Singapore, it is difficult to predict how the containment process is going to fare.

As per ABS preliminary international trade figures, goods exports for Australia have increased by 29% or $8 billion in March 2020.

The import of goods increased by 10% to $23.7 billion during March from the revised merchandise trade estimate of February 2020 driven by an increase in capital goods, intermediate and other goods and non-monetary gold of 18%, 6% and 85% respectively.

However, cafes, airlines and restaurants remained the hardest hit industries.

Sales fell for major sectors except for food, groceries

The seasonally adjusted retail sales for Australia soared by a record 8.2% during March as people stocked up on groceries and food amid coronavirus lockdowns. The increase in the sales was majorly due to increasing demand in supermarkets and grocery stores, liquor retail and other specialised food retail. While the Food sales were up 23.5% (more than $2.7 billion), the supermarkets and grocery stores grew 22.4% (about $2.1 billion).

However, there has been a significant fall in turnover for restaurants, cafes, takeaway food services, along with clothing and personal accessory retail stores. The slump in demand has come up due to the social distancing rules applied by the government amid the coronavirus outbreak.

The housing market could see a significant pullback due to COVID-19 pandemic. The property market is headed for a downturn as per the latest data figures reflect plummeting housing prices.

Core logic index has shown that the housing value growth rates are losing momentum since mid-March 2020 with a slump in listings volumes, agent activity and valuations. ANZ Property Council has revealed a sharp decline in residential and commercial property sentiment with the weakest confidence in the tourism and retail sectors. 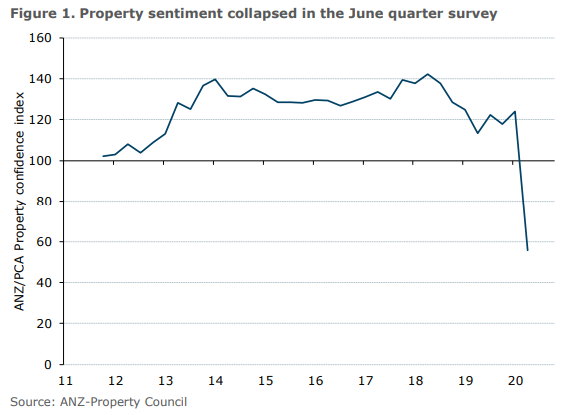 The Commonwealth Bank of Australia has anticipated a 10% plunge in housing prices during the next 6 months as economic activity is continuously being impeded amid coronavirus.

With dropping activity from real estate agents and plummeting property volumes across listings, the housing market is expected to witness a severe fall in the months ahead.

The Manufacturing PMI that tracks changes in the business conditions in the manufacturing sector declined by 4.1 points in April to 45.6. This was due to fall in the new orders resulting in an increase in the delivery time of the supplier amid coronavirus. While the Services PMI decreased from 38.5 in March to 19.6 in April. Lockdown and shutdown of companies led to a significant fall in the business activity and new orders during April. 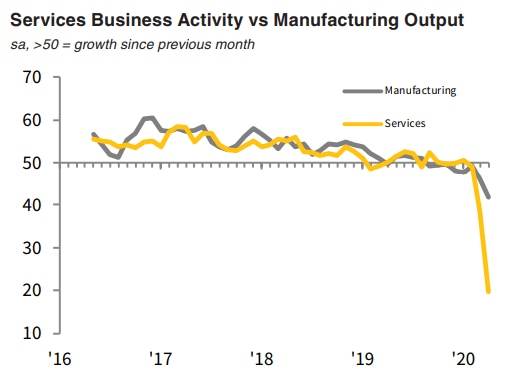 The Composite PMI, which is a combination of manufacturing and services PMI fell by 17 index points to 22.4 in April 2020 led majorly by the services sector.

Social distancing and shutdown of major businesses have pushed several workers out of their jobs. The unemployment rate was at 5.2% for March, but since significant lockdown measures were taken during late March, ABS surveys better reflect the unemployment figures.

RBA governor stated that the unemployment rate is anticipated to be at 10% by June as total hours worked are set to reduce by 20%.

Accommodation and Food sector was the worst affected sector with a decline in jobs by a quarter and wages down by ~30% between 14 March- 14 April. Education, healthcare, utilities and Transport remained the least affected sectors.

Westpac has forecasted that the unemployment rate for the June quarter will be at 9% and later dropping to 7% by the end of December.

The government is in no mood to lift the lockdown till September after which there will be slight ease in controls leaving more people jobless. The Australian government has taken fiscal measures worth $320 billion to lift up the economy.

The lockdown measures and restrictions on people movement are set to affect the Australian GDP growth significantly. The Australian economy is expected to plunge by 6% in 2020 with a growth of 6-7% in 2021.

If Australia can prevent the coronavirus cases from rising and subsequently able to relax travel restrictions, the country can set the stage for a rebound with a revival in industries like cafes, airlines and restaurants. However, the duration of lockdowns and the exit strategy pursued by the government will determine the actual recovery.