Australia ranks amongst the world’s 20 largest economies. In 2019, the country is expected to the fourteen largest economy, globally, and the fifth largest in the Asian region. As per the benchmark report of 2019 released by the Reserve Bank of Australia, Australia has entered its 28th year of uninterrupted annual economic growth. Since 1992, annual economic growth of Australia had grown over 3% on average each year. It may also be interesting to know that Australia is the only major developed economy with no annual recession in this duration.

Listed on ASX in June 2014, Scentre Group (ASX: SCG), part of the real estate sector, is the owner and operator of a portfolio of living centres. The company’s properties are located in Australia and New Zealand. 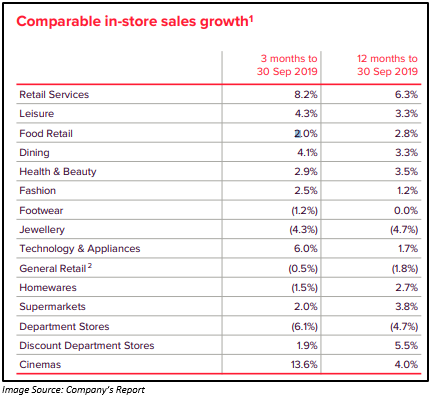 On 16 October 2019, Greg Miles, the Chief Operating Officer of SCG, informed the Group regarding his plan to retire in 2020 after working with the company and Westfield executive teams for nearly 23 years.

On 14 October 2019, SCG announced that its Chief Strategy and Business Development Officer, Cynthia Whelan has decided to leave the Group. Ms Whelan joined the organisation to review as well as enable the implementation of strategy, technology and business development function of the company.

The company, in half-yearly results for the period ended 30 June 2019, had unveiled about its security buy-back program of up to $800 million.

Samantha Hogg is an experienced executive with global exposure across sectors like infrastructure, transport, energy as well as resources.

Post the completion of the acquisition, the company got access to SKM’s properties, plant and equipment, in addition to certain other assets, for ~ $66 million. Through this acquisition, the company will be provided with a network of five recycling sites. Of the total sites, three are material recovery facilities, while one is a transfer station in Victoria and the last one is a material recovery facility located in Tasmania. The acquisition is unlikely to contribute materially to earnings during the current financial year.

Reece Limited (ASX: REH), a plumbing, building and hardware merchant, released its AGM presentation on ASX on 30 October 2019. The company in the AGM highlighted its FY2019 results for the period ended 30 June 2019.