Jumbo Interactive Limited (ASX: JIN) is an ASX-listed company that functions as a digital retailer selling official government and charity lotteries. Headquartered in Brisbane, Australia, the company was founded in 1995 and was officially listed on the ASX in 1999. Jumbo operates the website www.ozlitteries.com that allows customers to purchase Australian lottery tickets online.

Through its digital marketing campaigns, Jumbo Interactive entices customers to purchase tickets online. The company supports lottery providers in increasing the total number of tickets sold and earns a commission in exchange.

Jumbo interactive aims to reach $1 billion through ticket sales by FY 2022 (known as ‘$1 Billion Vision’). The sales would be conducted through the Jumbo platform and include both the ticket reselling business and the SaaS business.

On 5 December 2019, Jumbo Interactive announced a licence agreement with Deaf Services, an Australian charity lottery operator. The 5-year SaaS agreement can be extended to 10 years, depending on the pre-decided minimum performance criteria.

As part of the agreement, Jumbo would offer a personalised version of its Lottery Platform to Deaf Services, which would help the latter oversee its complete lottery sales.

The agreement is the third SaaS licence agreement for Jumbo and contributes to its ‘$1 billion vision’.

On 20 December 2019, Jumbo Interactive released its half-year (ending 31 December 2019) trading update. According to the release, the company anticipates that the total transaction value (TTV) would grow by ~27% to reach $187.6 million in the first half of FY 2020. The company believes that growth in customer activity on Jumbo’s new platform is a key reason for the expected growth, along with a rise in online ticket purchases. Jumbo’s revenue is expected to grow by ~24% to reach approximately $37.8 million.

However, NPAT, post expenses related to acquisition costs and business development, is likely to grow at a relatively low rate of 13% to nearly $14.3 million. The dividend policy was unaltered and remained at 85% of NPAT. The EBITDA margin is anticipated to be ~60.1% for the first half of FY 2020, an increase of 63.9% compared to pcp. 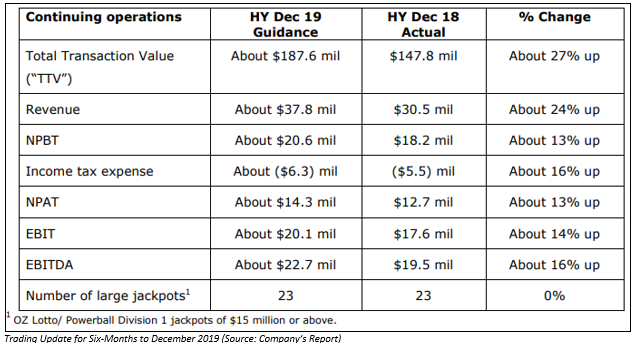 The company predicts that the average large jackpot value would touch approximately $46.5 million, a substantial increase as compared to $37.4 million in the first half of FY 2019.

Jumbo’s shares plummeted after the release of its trading update. The stock fell 14.053% during the day and closed at $15.740.

The sharp fall in share price during the day indicated that the market expectations with respect to the company’s performance were not met. While Jumbo’s release showed robust growth for both revenue and TTV, the market responded negatively.

The lower growth expectations in NPAT for the first half FY 2020 can be attributed to investments in business development as well as the costs involved in the acquisition of Gatherwell Limited (one-off costs).

The CEO of the company said that the contraction in the margin is not permanent while indicating that underlying EBITDA margin would return to levels seen in previous periods by the end of the fiscal year 2021.

Jumbo Interactive reported robust FY 2019 results with revenue from continuing operations growing by 64% over the previous year to reach $65.2 million. TTV for the year reached $321 million, an increase of 75% over FY 2018. EBITDA witnessed a 107% growth to reach $40.2 million.

Jumbo highlighted that the shift to the new software platform contributed significantly to the overall performance for the year. Further, the addition of a new business segment, SaaS, makes the company a software platform partner.