Spotlight On Graphite And 5 Key Stocks

Spotlight on Graphite and 5 Key Stocks

Graphite is a naturally-occurring form of crystalline carbon, considered as a good conductor of electricity.

There are several different types of Graphite, which include Flake, Amorphous, Vein and Primary Synthetic.

Flake graphite has a crystalline structure with distinctly flaky morphology. Flake is mainly sourced from countries like China, Mozambique and Brazil. It is produced in the graphitic carbon range of 80 percent to 98 percent and is considered as low-cost graphite with less impurities. 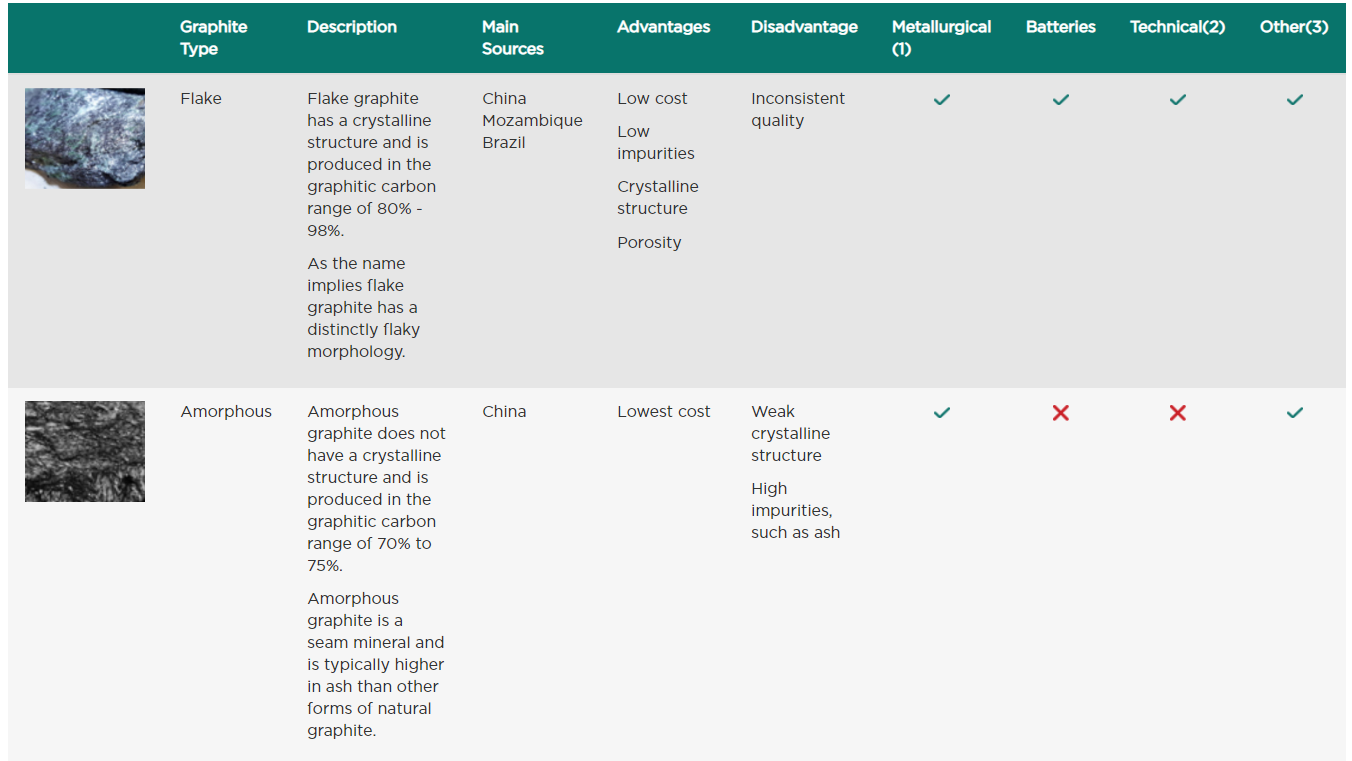 Amorphous Graphite is a seam mineral, which is mainly sourced from China at a very low cost. Amorphous has a weak crystalline structure and is not used in batteries. It is typically higher in ash than other forms of natural graphite and is produced in the graphitic carbon range of 70 percent to 75 percent. On the other side, Vein Graphite is a rarest and most valuable form of graphite, which is produced in the limited tonnages with very high-grade quality. It has small economic sources and is not used in the manufacturing of batteries.

Natural Graphite is a critical material for vehicle electrification, energy storage and emissions reduction. In parallel with cobalt and lithium, graphite is also a key part of lithium-ion battery production. It is believed that without natural graphite, the cost of clean energy storage systems will be higher than what it currently is. Along with Natural Graphite, Synthetic Graphite is also in great demand, which is primarily used as a conductive electrode in refining iron in an electric arc furnace.

According to Battery Minerals Limited (ASX: BAT), in short-term to 2023, it is expected that significant growth in demand will be experienced in traditional graphite sectors like refractories, fire retardant materials, friction and lubricants. 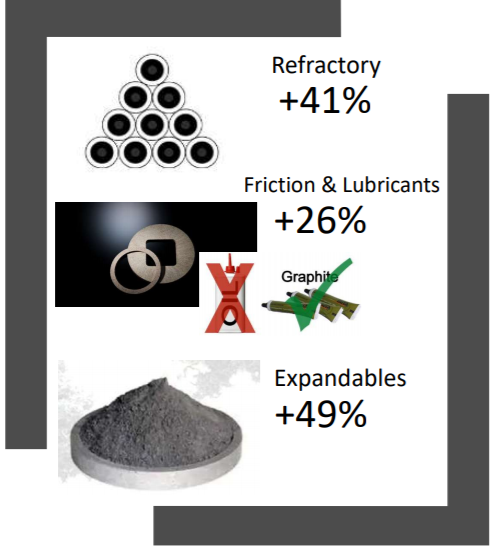 As per the leading graphite producer, Syrah Resources Limited (ASX: SYR), battery industry growth is leading to around 35 percent forecast increase in natural graphite demand in the next three years. Besides this, Graphite is also used in the manufacturing of ‘Lead’ for pencils.

An Australian-based industrial minerals and technology company, Syrah Resources Limited (ASX: SYR) intends to become the world’s leading supplier of superior quality natural graphite products. The company is primarily involved in the development of the Balama Graphite Project, which is currently running at its full capacity of ~350ktpa. The company recently announced the appointment of a highly experienced Sara Watts for the role of Independent Non-Executive Director. In her over a decade of experience, she held various senior management roles in big companies like IBM Asia Pacific and City West Housing. Her experience in finance, audit and operations will be a valuable addition to the company’s Board.

The company is sharply focused on continued market penetration of its graphite products at competitive prices, and the qualification of its anode materials from the BAM plant in the United States.

The company’s grand vision of emerging from a start-up company which first discovered Balama in 2011, to by the end of 2018, being in commercial production as a global leader in natural graphite production is already an extraordinary achievement. Certainly, the excitement of battery supply chain commodities is now maturing, and the investment community is understandably exercising greater selectivity regarding investments in companies across the sector. The company is establishing a global deep market acceptance for its high-quality natural graphite products across all product sectors and is progressively de-risking its position as the pre-eminent supplier outside of China.

Anson Resources Limited (ASX: ASN) operates in new energy and technology markets and is involved in the development of the Paradox Basin Brine Project for recovery of valuable chemicals. From this project, the company recently produced around 1 kg of battery quality lithium carbonate.

In the month of May 2019, the company closed its Share Purchase Plan and received applications worth of $608,700. The company has also secured a $15,000,000 facility with Long State Investment Limited in which Long State will subscribe for shares in ASN at any time over the next 24 months, up to a total placement amount of $15,000,000. The company also informed that it has received a placement commitment of $1.65 million from its strategic investor, Chia Tai Xingye International, of 27,500,000 fully paid ordinary shares at an issue price of 6 cents per share.

Battery Minerals Limited (ASX: BAT), as the name suggests, is focused on the exploration of battery minerals via its two graphite projects, namely Montepuez and Balama, which are located in Mozambique. With the exposure to growing traditional graphite markets, the company is very well-positioned to rapidly respond to Clean Energy Growth.

In the month of April 2019, the company announced a two-tranche placement to raise in aggregate a total of around $5.1 million via issue of around 204 million Shares at an issue price of $0.025 per share.

Magnis Energy Technologies Ltd (ASX: MNS) is having part ownership of over 90GWh of planned lithium-ion battery production in Australia, the USA and Germany and is involved in the proposed development and ultimately mining of natural flake graphite for use in various industries. Magnis Energy recently announced the expiration of 1,000,000 unlisted stock options at $0.70, with an original expiry date of 17th November 2019.

The company recently announced that its technology partner, Charge CCCV has recently supplied batteries to Martac using its proprietary BMLMP cathode technology for its unmanned water and surface vessels and each battery is 20KW in size, which will be used in commercial marine vessels for demonstration and testing purposes.

The company is currently aiming to become a global producer of next-generation lowest cost Li-Ion Battery (LIB) cells for the rapidly growing EV (electric vehicles) and ESS (Energy Storage Systems) markets by creating a competitive advantage through unique IP and by establishing collaboration networks with leading institutions and developers. Further, the company intends to create a global presence for economies of scale through strategic alliances and Joint Venture partners. The company has realised leading battery technology with its high performing, chemically benign anode technology and through the partnership formed with US Based Charge CCCV.

Recently, the company announced that it is in a unique position to commence commercial sales of PureGRAPH™ graphene products as it was advised by the Department of Health (NICNAS) that its assessment is completed and the approval will be granted to produce and sell PureGRAPH™ products in Australia, which is an encouraging news for the company and its shareholders. Along with Steel Blue, the company recently announced that they are working in collaboration to incorporate graphene into existing and new materials of Steel Blue’s footwear.