Headquartered in Sydney, Australia, Sonic Healthcare Limited (ASX: SHL) is a global healthcare service provider that is listed on ASX since 1987. The company is focused on providing laboratory, imaging and primary medical care services to doctors, hospitals, community health services, and patients.

Share prices of Sonic healthcare Limited came under the radar post an announcement on 10 October 2019, related to long-term debt funding. It has been updated to the market that the company has priced USD 550 million of notes in the US private placement market. Further, informing on the closing of the transaction, which is expected in January 2020, upon completion of the final investor due diligence and documentation. The tenor of this funding would be for-

The company believes that this move would extend its debt maturity profile with the weighted average fixed coupon for the notes will be 3.07%.

On 25 September 2019, Sonic Healthcare Limited released annual report for the year ended 30 June 2019. SHL achieved a record financial results in FY2019 period, which were in line with its guidance. Some of the highlights of the same are as follows:

The guidance provided by Sonic Healthcare for the year 2020, excluded the impact of new lease accounting standard AASB 16.

Dated 19 August 2019, the company provided details of the bonuses in respect of the year ended 30 June 2019 and the previous corresponding year. 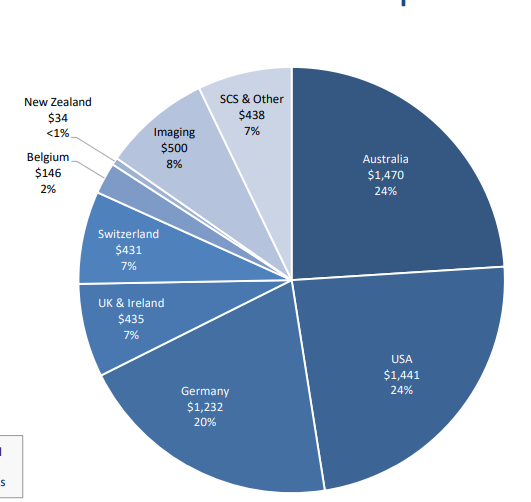 In Australia, the company recorded market share gains with strong organic revenue growth of 5%, which included revenue generated from the national bowel screening contract won by the company effective 1 January 2018, with the earnings growth and margin accretion being in the pipeline. SHL also reported substantial savings resulted from acquisitions.

In the United States of America, SHL recognised revenue growth of 18% on a constant currency basis, which was enhanced by the acquisition of Aurora Diagnostics on 30 January 2019. SHL’s revenue decreased by $33 million due to the merger of Sonic’s division in US Mid-west into its collaborative project with ProMedica Health System, Inc. dated 1 September 2018. Further, Medicare (PAMA) fee cuts with effect from 1 January 2018 and 1 January 2019 also impacted the US revenue and earnings. Moreover, organic revenue grew by 5% (on a constant currency basis).

In Germany, SHL generated growth in revenue by 3.5% (on a constant currency basis). Revenue and margins were impacted by the regulatory changes taken place in April 2018 however, in the recent months, organic revenue growth and margins have been trending stronger. German growth was improved by the procurement of Pathologie Trier in July 2018.

In UK and Ireland, the company achieved organic revenue growth of 9% (on a constant currency basis), boosted by the completion of one year of Barnet / Chase Farm hospital contract that began in October 2017.

In Switzerland, the company reported organic revenue growth by 4% with strong earnings and margin growth.

Sonic’s Imaging organic revenue growth of 6% has been reported, which was in accordance with the market growth. Also, with margin accretion, 7% earnings growth was reported.

Medical centres (IPN), and occupational health businesses (Sonic HealthPlus) comprises Sonic Clinical Services. It is Australia’s largest primary care and occupational health provider with 233 centres and approximately 2,400 GPs. The current period revenue was reduced by $9.3 million because of the new revenue accounting standard AASB 15, which came into effect from 1 July 2018. 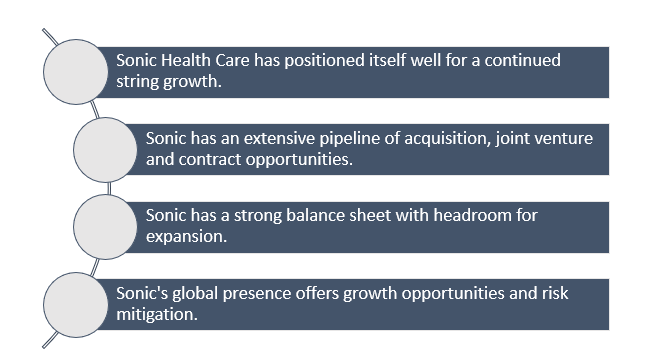 Additionally, the company’s progress is backed by stable, qualified and dynamic global management teams, with its innovative technology driving efficiencies, initiative leading to acquisitions and other collaborations delivering ongoing benefits.