Given the rising global concerns on climate change, companies are moving towards generating carbon credits by investing in clean development projects. In the milieu of which, several electricity providers or energy companies are shifting in the direction of hybrid generation.

In line with the same, oil & gas giant, Shell Australia recently announced the 120 MW Gangarri solar project in Wandoan in Queensland. The move by the company seems to be in line with the state target of achieving 50% of renewable energy by 2030. The company’s strategy is to transform into an integrated energy supplier from an oil & gas (O&G) producer, and the initiative taken is in line with its target of becoming an electricity generator. The future economies are expected to be driven by electrification, courtesy to ongoing decarbonisation.

Moreover, last year, Shell strike a deal and completed the acquisition of ERM Power Ltd worth A$617 million. The takeover bid with a 43% premium is the testimony to Shell’s ambitions of launching itself in the electricity retail sector. ERM with tremendous industrial and business customers will help Shell to differentiate from competitive likes of Origin Energy and AGL dealing in the household consumer space.

Interestingly leaving the competition, Shell chose to acquire Germany-based Sonnen to supply household battery and make it stand in the consumer market differently. The acquisition made in 2019 will help the company to assist consumers with clean and affordable energy solution. It sets to optimise the rooftop solar generation cycle by supplying solar energy from the battery to provide electricity at night.

Complementing the move, next more significant acquisition done was of ESCO Pacific, a solar farm developer. The 49% stake in ESCO will enable the company to offer integrated energy solutions by gaining expertise in power. ESCO is experienced in developing utility-scale solar farms of 500 MW capacity and manages another 350 MW of capacity as part of long-term deals.

Hence, the gas-fired generation of ERM along with a storage facility of Sonnen and electricity generation from solar will provide a unique mix to the company to cater consumers on long-term contracts with low carbon emission.

Consequently, the announcement of 120 MW of solar farm capacity is the evidence of Shell's new energy strategy of blending gas generation with renewable mix, given future growth and expected demand for electricity.

Let us now deep dive into the Gangarri project.

Gangarri Project: It is a 120 MW solar project, to be constructed in central Queensland. The project is expected to use approximately 400,000 solar panels (PV) to light up almost 50,000 homes. Also, it will help in an emission reduction of ~300,000 tonnes of CO2 per annum. The initial capital expenditure of the project has not been disclosed yet, but it is likely to be funded by the company’s New Energies Business under the annual investment fund of ~ US$1-2 billion.

Moreover, AGL Energy and Vena Energy have announced to install one of the biggest battery plants near Wandoan, which is expected to couple with the 120 MW of solar energy generation of the company. The project is also expected to generate employment for ~200 people at the time of construction, while it is expected to get completed by early 2021.

Click here to read The Future of Energy Generation in Australia; Solar to Increase Three-Fold By 2024.

Australia’s solar radiation/m2 is the highest amongst any other continent and thus has better resources for electricity generation. The Country receives ~58 million PJ/ year on an average, i.e. ~10k times to its energy consumption. Australia receives highest solar radiation over the centre and northwest of the continent, i.e. the desert region.

As per the Department of the Environment and Energy, Australia estimated ~18.87% of renewable generation in total electricity production in 2018. In which, solar energy takes the stand of ~4.62%. Thus, more opportunity exists in tapping solar energy in the Country.

The favourable government policies driven by state schemes helped in rising renewable energy generation followed by the rooftop helping the Country in meeting its target. Even the business entities started investing in low carbon or cleaner technology to earn carbon credits in line with the Paris agreement and the Country's Renewable energy policy. 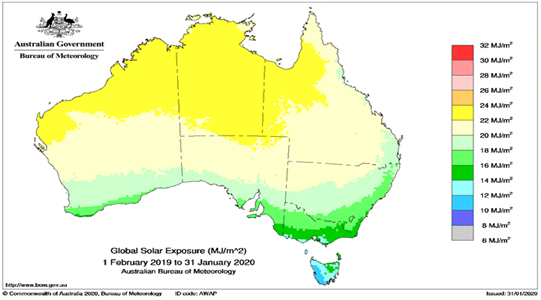 Do Read: What's the buzz about Zero Mass Water? How is it making clean water via its solar panels?

Therefore, from above, it is quite clear that the project will help positively in achieving the company target of becoming one of the low-cost energy solution providers. Also, mixing the electricity generation with solar is expected to drive industry consumers for a long-term contract, as it may also help them in achieving their target of sourcing cleaner fuel. Moreover, battery solution will help with distributed generation for both retail as well as industrial consumers.