Intriguingly, the three companies under discussion from the ASX-universe are involved in clean energy and allied sectors. And, the prominence of such companies increases as they act as a catalyst in promoting a clean future.

New Energy Solar is the first ASX-listed solar infrastructure business having more than $1.3 billion in the solar plant across the US and Australia, proposing an investor with a risk-adjusted return and positive social impact.

In December quarter, NEW commenced operations at the 200-megawatt MS2 plant, which is located in Imperial Valley in California, on 24 December 2019.

It is said that the revenues would accrue from the substantial completion that was achieved on 17 January 2020 until the beginning of 20-year PPA with Southern California Edison in June 2020.

With the ramp-up of MS2 the Company has 16 operating assets in the portfolio now, which was at four operating plants when NEW was listed on ASX in December 2017. Its entire portfolio is operational with a 70 per cent increase in an operational capacity as against December 2018.

NEW had announced a distribution of 4 cents per stapled security for the six-month ended 31 December 2019.

In November 2019, the business announced launching of the asset sale process for some interest in its two assets, which includes MS2 solar plant in California and Boulder solar plant in Nevada.

It is said that the prospective bidders are asking to dilute the ownership of around 50 per cent in the US and Australian portfolios. As a result, the business has extended the sale process which is likely to be completed by second-quarter of 2020.

Reportedly, its 16 operating assets generated around 244k megawatt hours of electricity during the quarter, and this is expected to have displaced an equivalent of 175k tonnes of CO2, which is comparable to removing 55k cars from the road and powering 36k houses.

With a goal to become a leader in modular LNG development, the independent energy company is involved in the production and sale of natural gas with ongoing expansion into LNG.

The Company has an ambitious target of emerging as a vertically integrated clean energy supply chain mobilising natural gas, delivering power, and LNG throughput in the Asia Pacific region.

Incorporated in Australia, EWC has been on the bourses of ASX since 1998, and It owns and operates a 315 MW combined-cycle power plant in Sengkang, Indonesia. In natural gas, the Company extracts gas from Sengkang Contract Area in Indonesia. 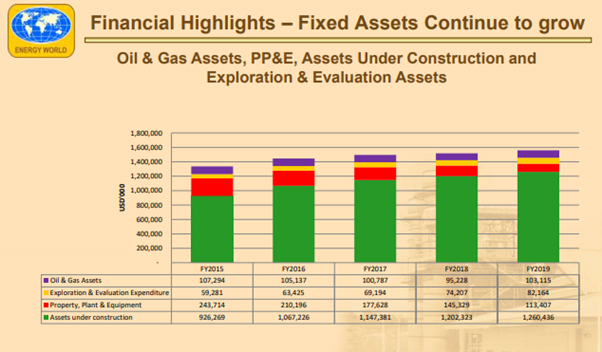 It is said that EWC pioneers in developing the concept of mid-scale modular LNG facility that has lower cost with a shorter construction period as against conventional LNG.

EWC is undertaking the development of LNG Hub Receiving Terminal in Pagbilao, Philippines along with an LNG fuelled 650 MW combined cycle power station, making it the first LNG receiving terminal in the Philippines.

The business has owned LNG gas field in Australia that are connected to existing pipelines and network plant, which were running until 2001. And, the company is in the process of getting these plants back online.

EWC believes that the growing demand for efficient and clean power generation in the Asia Pacific region present it with opportunities. It has plans to develop new power generation capacity fuelled by LNG and natural gas to bridge the supply-side constraints and tap the demand.

A USD 8.9 million reversal in impairment due to re-energising of Eromanga plant and equipment boosted the profits. Thus, the net profit for the period was USD 29.35 million compared to USD 22.15 million in the previous year, thus the basic EPS was US 1.58 cents vs US 1.20 cents in FY 2018.

In its Appendix 4C for the six-month ended 31 December 2019, the business informed that it has a positive operating cash flow position with +USD 20.44 million.

On 7 February 2020, the company reported that an adjudication determination was received in relation to the disputed payment claim. The claim related to a disputed claim between Kennedy Energy Park Pty Ltd and its EPC contractor.

Kennedy Energy is a 50 per cent owned SPV of the company. It is noted that the Kennedy must pay around $950k in milestone payments, around $6.6 million in variations claims and delay costs, plus GST.

The Determination is in line with the Queensland Building Industry Fairness Act 2017. And, the public body has denied claims in tune of around $19.6 million by EPC contractor, and reversed Kennedy’s damages and costs, which are unpaid by the contractor.

Windlab noted that such a determination is not a final verdict but a payment decision, which is review under enforceability currently. If it were enforceable, the determination would be subject to legal proceedings that would ultimately resolve the dispute.

In addition, the Company is working with the partner of Kennedy Energy and the project’s financier – Clean Energy Finance Corporation to mobilise funds to undertake necessary developments, including proceedings.

Kennedy, a non-recourse SPV, does not substantiate to direct liability for the company, and the Company do not expect to advance additional funds to Kennedy.

Lately, WND has been a subject of 100 per cent acquisition by Federation Asset Management at an offer price of $1 per share. The bidder is undertaking its necessary reviews and it is expected that more information would be provided after exclusivity period ends on 21 February 2020.