A Glance Over The Latest Macro Developments in Australian Economy

The Australian economy is well-known among developed economies for its uninterrupted growth pattern. It is the only major developed economy that has not recorded any annual recessions from 1992 to 2018.

As per the Australian government, the country has experienced 28 years of uninterrupted economic growth so far, backed by its dynamic industrial base, leading education sector, network of free trade agreements and strong foundations. The Australian economy is likely to become the fifth largest economy of the Asian region in 2019.

Although the Australian economy holds a strong place among other developed economies, it has been facing several challenges for the last few months on the domestic as well as the global front.

However, the country is now witnessing some favorable changes across the international and domestic market.

On the global front, the ongoing trade dispute between China and the US has shaken the economies across the world, raising concerns of economic downturn. However, some recent developments in the US-China trade conflict are giving a sigh of relief to the global economies.

Post continuing a long tit-for-tat tariff war, the US President Donald Trump has recently delayed the scheduled tariff hikes on Chinese goods. Both the countries have also decided to hold a meeting in Washington next month for easing trade tensions.

The Australian economy, that has been facing subdued inflation along with a weakened housing market and labor market conditions for the last few months, is now showing some signs of recovery.

Let us now try to understand the current economic scenario of Australia through some recent statistics released by the ABS (see figure below). 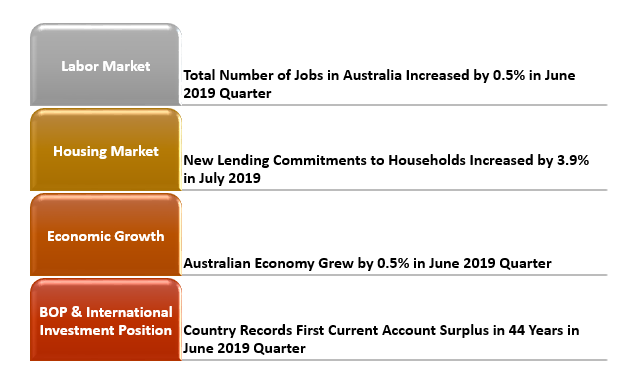 The number of filled jobs in Australia improved by 0.5 per cent in June 2019 quarter in seasonally adjusted terms, following a rise of 0.2 per cent in March 2019 quarter.

On a year-on-year basis, the filled jobs increased by 2.4 per cent through the year in seasonally adjusted terms. The total labor income also rose by $2,515 million during the period, taking the average labor income per employed person to $19,065.

As per the RBA, the employment growth is likely to remain moderate over the next six months. The central bank expects the unemployment rate to remain at 5.25 per cent for some time before reducing to 5 per cent over the subsequent couple of years.

As per the latest ABS data, the new lending commitments to households in seasonally adjusted terms has improved by 3.9 per cent in July 2019, following a rise of 1.9 per cent in June.

According to the ABS Chief Economist, the improvement in new lending commitments to households of 3.9 per cent in July was the greatest such growth seen over last five years. The rise in lending to households was driven by:

The number of loans to the owner occupier first home buyers saw a rise of 1.3 per cent for the fourth consecutive month in July. The increase in lending commitments to new home buyers was possibly because of the recent move taken by the APRA to scrap 7 per cent home loan buffer. 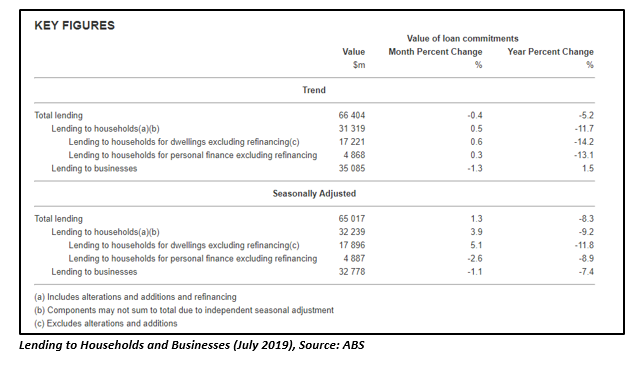 Besides an improvement in lending to households and businesses, the Australian property market also observed a rise in property prices in August 2019 after breaking a record of nearly two and a half years.

The property prices rose by 0,8 per cent in Australia last month, with a 1.6 per cent rise in Sydney and a 1.4 per cent increase in Melbourne property prices. The recently announced statistics are signaling towards a recovery in the Australian property market that has been struggling for quite a long time now.

As per the ABS, the Australian economy grew by 0.5 per cent during the June 2019 quarter and 1.4 per cent through the year in seasonally adjusted chain volume terms.

According to the ABS economist, the GDP growth was driven by the external factors while the growth in the domestic economy remained unchanged during the quarter. Net exports was the major driver of economic growth that contributed 0.6 percentage points.

Although the Australian economy witnessed a growth of 0.5 per cent, it was slowest such growth observed since the global financial crisis.

Besides these developments, the Australian economy had also witnessed a major improvement in its inflation figure during June 2019 quarter. The inflation surpassed the market expectations by rising 1.6 per cent during the quarter against 1.5 per cent anticipation. This was a significant achievement for the Australian economy that saw its CPI flat in the March quarter.

The inflation has always remained an important indicator for the RBA, for which the bank reduced the interest rates to 1 per cent this year. The interest rates were lowered by the central bank twice this year amid challenging conditions in the Australian economy, including a rise in the unemployment rate and subdued inflation. The bank has also signaled for further rate cuts in the near future if required to stabilize the Australian economy.

Amidst these recent developments in the Australian economy, whether the central bank would ease monetary policy further or will keep interest rates steady at 1 per cent, would be an interesting watch.