In June 2019, Australian Bureau of Statistics published the National Income accounts for March 2019. According to the release, the household consumption expenditure fell in recreation and culture by 0.5%, clothing & footwear were down by 0.6% and hotels, cafes and restaurants were down by 0.4%. It should be noted, that the rise in household consumption expenditure was reported in financial services & insurances, health, food and energy (electricity, gas and other fuel).

Economists have been talking about the persisting recessionary pressures in the market, and the slower demand in the market resulted, in a rate cut from the Reserve Bank of Australia. It can be said that the stimulus from the central bank may revive the consumer’s sentiment; so, that the aggregate demand picks up in the economy.

Metcash Limited (ASX: MTS) reported the results for the full-year ended 30 April 2019 on 24 June 2019. The company reported a profit against a loss in the previous corresponding period and announced a fully franked FY19 final dividend of 7.0 cents per share to be paid by 7 August 2019.

As per the release, the earnings in the hardware were underpinned by the synergies of Home Timber & Hardware (HTH) acquisition while growth in the IBA network improved the earning in the liquor business. Also, the earnings in the food business were subdued due to the decline in wholesale sales and increasing operating expenditure for MFuture initiatives.

It was reported that through the Working smarter program was consequential to additional cost savings, which offset the inflation across the group. The Board of the company also announced a fully franked dividend of 7 cents per share, which takes the total dividend for the year to 13.5 cents per share; the record date for the dividend is 10 July 2019 while payment date is 7 August 2019. 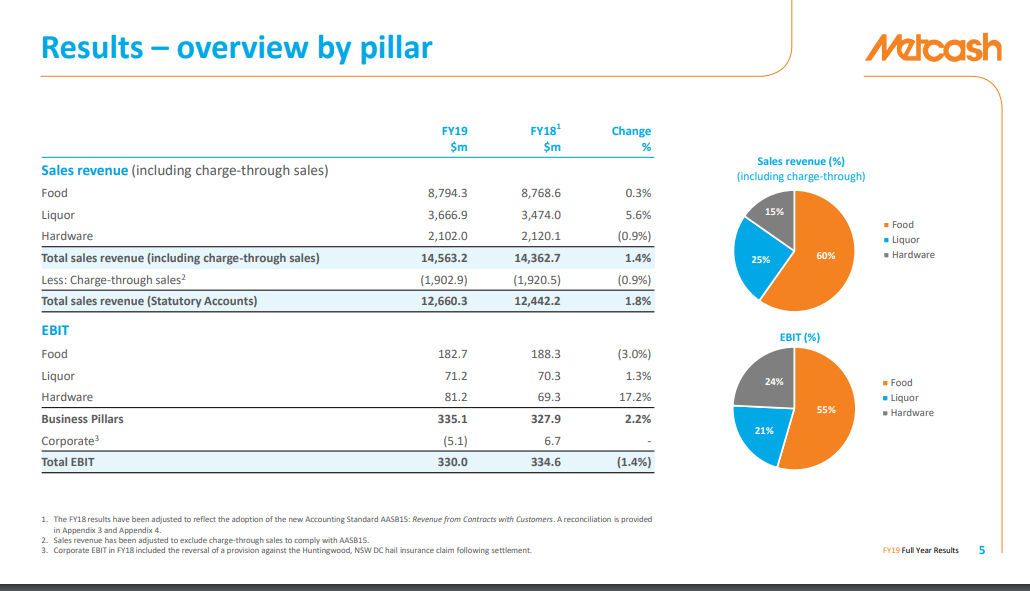 Retail giant, Woolworths Group Limited (ASX: WOW) is one of the bluechip companies in Australia. In the light of recent subdued consumer sentiments, it would be interesting to keep eyes on the performance of the retail giant in its full-year results.

In May 2019, the group released its third-quarter sales results for the FY19 – 13 Weeks to 31 March. According to the release, the business verticals of the company witnessed moderate growth while $1.7 billion proceeds from the sale of Woolworths Petrol were distributed subsequently by 27 May 2019. Below are the performances of the group’s business verticals as per the release regarding third-quarter sales results.

Australian Food: Average prices declined by 1.7% excluding Fruit & Vegetables and Tobacco compared with the same quarter last year, and by the end of the quarter, Woolworths Supermarkets and Metros stood at 1020 including 36 metro branded stores. Sales in the quarter increased by 4.1% to $10,017 million in March 2019 against $9,624 million in March 2018.

Endeavour Drinks: Woolworths reported that the category mix remains a challenge for Dan Murphy, while overall wine category in Australian contracted marginally; beer and spirits saw a growth of ~2 per cent and 4 per cent respectively. It had been reported that the online sales grew 10.5%, backed by 559 BWS stores offering on-demand services while 79 Dan Murphy’s stores rolled out on-demand services by the end of Q3 FY19. According to the release, sales grew by 3.7% to $2,072 million in Q3FY19 against $1,999 million in 2018 Q3FY18.

New Zealand Food: Fruit & Vegetables and Perishables drove the sales, and the store closures impacted total sales. It had been reported that the online sales grew at 42.8% in the quarter, and $150k was donated to the ‘Our People, Our City fund - The Christchurch Foundation’ in relation with the tragic event of Christchurch.

Big W: It was reported that despite strong growth, the recovery of higher margin in apparels and stockloss challenges would result in an expected loss before interest & tax of $80-$100 million in FY19. However, sales growth in the business was 2.6% compared with the previous corresponding quarter, backed by transaction growth and items per basket. 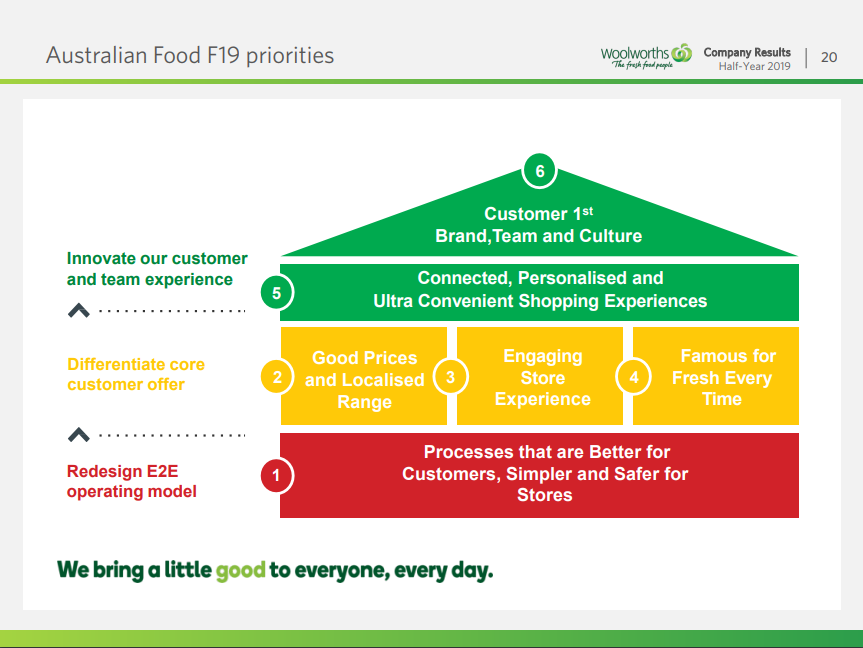 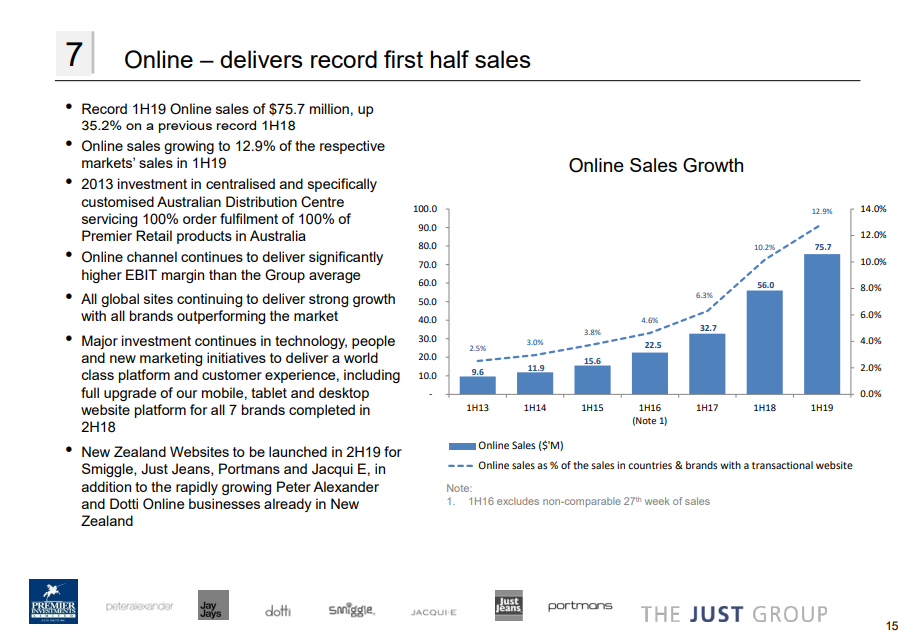 The group continues to control the costs and closed 16 stores in the last 12 months during January 2019; this was consistent with the program to close unprofitable stores. Group remains focused on the closure of loss-making stores due to unrealistic rents, which is consequential to positive EBIT despite the loss of sales.

Gross Margin: It was reported that the Premier Retail’s gross margin of 63% had been underpinned by the gross margin strategies pursued by the company. Some of the strategies include long term foreign currency hedging to allow merchandise planning for a long term, direct sourcing initiatives providing consistent benefits from existing and new suppliers, investing in better merchants to deliver better products and focus on effective markdown management to deliver clean inventory.

As per the releases, Premier Investments reported a record 1H19 NPAT of $88.8 million up by 13% in January 2019 against $78.6 million in January 2018. Also, the company declared a fully franked interim dividend of 33 cents in 1H19, up by 4 cents from the 29 cents in 1H18. Furthermore, the company witnessed 35.2% growth in the online sales, and the balance sheet includes $238.9 million as an equity value for the stake in Breville Group Limited.