As per the recent retail trade figures provided by the Australian Bureau of Statistics, Australian retail turnover climbed 0.2 percent in September 2019.

Ben James, Director of Quarterly Economy Wide Surveys, stated that there was a mix of results at the industry level in September 2019. Growth in other retailing was 0.8 percent, cafes, restaurants and takeaway services grew by 0.6 percent, food retailing by 0.1 percent. On the other hand, the growth in clothing, footwear and personal accessory retailing declined by 0.5 percent and retailing in department stores dropped by 0.2 percent. Household retailing remain unchanged.

For the September 2019 quarter, there was a decline of 0.1 percent in seasonally adjusted volume terms, driven by a decline in cafes, restaurants and takeaway food services by 1 percent and department store by 0.1 percent.

McPherson's Limited (ASX: MCP) is the leading supplier of health & beauty, consumer durable as well as household consumable goods in Australasia and increasingly in China, with operations in Australia, Asia and New Zealand. It is also engaged in marketing and distribution of beauty care, hair care, skincare and fragrance product ranges, kitchen essentials such as baking paper, cling wrap and aluminium foil and personal care items such as facial wipes, cotton pads and foot comfort products.

Apart from that, the company manages as well as represents major international brands along with retailersâ private labels. Thus, it provides retail customers with a single-source opportunity for entire portfolio, starting from product innovation and range of development to a menu of how the ranges are delivered and managed in-store.

On 11 November 2019, McPhersonâs Limited (McPhersonâs or the company) announced that it entered into a joint venture (JV) arrangement with Access Brand Management (ABM) for expanding the sales of Dr. LeWinnâs branded products in Greater China and together they would develop new brands as well as products for the Greater China market.

ABM forms a part of Access Corporate Group which at present manages as well as represents ~ 20 Australian and other international brands in the international market and takes aim on the Chinese market as well. 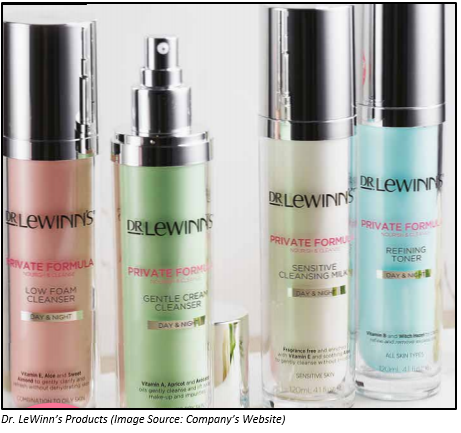 McPherson's Managing Director, Mr. Laurence McAllister, in the media release of FY2019 results, stated that the strong result of the company during the period was the outcome of the companyâs strategic business initiatives. He also highlighted that the stellar result from Dr. LeWinnâs delivered growth in the revenue by 125 percent. Based on the FY2019, he stated that the company is seeing its success with its export strategy, especially in Asia. Further steps were also taken to expand the companyâs product range in the segment like health, wellness and beauty.

The joint venture between McPhersonâs and ABM is in line with the companyâs strategy to drive growth in the export markets by capitalising on the solid demand for Dr. LeWinnâs products, including that from Chinese users.

Under the JV, ABM is required to attain a target of $35 million in yearly purchases of Dr. LeWinnâs products from Mc Phersonâs in any year earlier to 30 June 2022 or $82.5 million over the three-year period ended 30 June 2022 in total, depending on any appropriate adjustments. It represents a compound annual growth rate (CAGR) in purchases of ~ 30 percent over 3 years.

In case, ABM fails to achieve any of the above terms and condition, then Dr. LeWinnâs trademarks that were transferred to the joint venture entity would be sold back to McPhersonâs at the initial nominal valuation.

In parallel with the signing of the JV agreement, Mc Phersonâs and ABM have also expanded their distribution agreement for the Dr. LeWinnâs brand in Greater China until 30 June 2022, and there is a possibility for further extension beyond this date.

Commenting on the JV between ABM and Mc Phersonâs, Managing Director, Mr. Laurence McAllister stated that this joint venture fits perfectly into the companyâs strategic approach to grow international exports in Greater China. Through this JV, the aim is not only limited to further growth in Greater China but also improve the value of the brand internationally. He also stated that the JV gives MCP greater confidence to attain its ambitious objectives to make progress in Greater China, by strengthening its relationship with a successful partner like ABM which has a proven track record of market expansion.

The company increased its investment as well as strengthened its partnership with the Aware Group in order to fulfil the demand for the product. Aware Group is a competent, high quality and trustworthy Australian manufacturer as well as supply partner of the company.

With a strong relationship of the company with ABM as a partner and Aware Group as a reliable, innovative manufacturer, the company is hopeful that it would be able to attain outstanding growth as well as raise its shareholder value.

Since last 5 years, the shares of MCP have consistently given an outstanding return. The shares have generated a YTD return of 124.72 percent. The shares on 14 November 2019 closed at $2.720, up 0.741 percent from its previous closing price. MCP has a market cap of $288.48 million with approximately 106.84 million outstanding shares, PE ratio of 20.770x and an annual dividend yield of 3.7 percent.