Retail industry has faced massive imbalances over the recent past due to the coronavirus led public health measures. While staples and household goods were racked up aggressively by Australians in March, there was gloom for apparel retailing, food services and department stores, as per the latest retail figures by the Australian Bureau of Statistics.

During March, the intensity was so extreme that competition watchdog –Australian Competition and Consumer Commission gave nod to supermarkets for collaborations in an effort to maintain supply of essential goods like groceries.

Although price fixation was not allowed by the regulator, supermarkets were given permission to coordinate with suppliers and logistics providers, thus augmenting the availability of groceries as supermarkets were running out of stocks.

In March, retail turnover surpassed the previous record of increase in monthly turnover when households rushed to stack up goods in June 2000 ahead of GST implementation. On a seasonally adjusted terms, retail turnover increased 8.5% month-on-month with original estimate for turnover clocking 14.7%.

Consumer demand was robust for goods, including hardware and building supplies; electricals and electronic goods; furniture and floor coverings; houseware and textile; cosmetics and toiletry, and recreational goods.

Since retail industry is one of the largest employers in the country, it becomes imperative for policymakers to ease the restrictions on people movement. The public health measures imposed by the Government in face of coronavirus forced to close many retailers, leading to stand downs and layoffs.

Australian policymakers have launched large stimulus packages to make floor for a smooth recovery, especially for small and medium sized businesses. The Reserve Bank of Australia (RBA) has lowered interest rates; banks are providing substantial reliefs to customers; provisions are in place for refinancing and funding; steps have been taken for commercial tenancies and leasing to mention few.

Businesses that have suffered substantial damage to cash flow are being provided with JobKeeper Subsidy, which seeks to fund wage bills of employers. Meanwhile, JobSeeker Payment is being given to Australians who are in distress.

Recently, the Australian Banking Association (ABA) noted that banks are providing loan deferrals on around $6.8 billion worth of business loans and mortgages. Also, there have been over $45 billion of new loans and $6 billion increase to existing loans and facilities.

June quarter is expected to report an economic contraction while the April PMIs had fallen sharply. Also, RBA is anticipating a 10% unemployment rate over the coming months, and above 7% unemployment by the end of next year.

A higher unemployment and wage losses mean a cautious consumer, consequently a subdued level of household spending. In the April issue of Westpac-MI Index of Consumer Sentiment, unemployment expectations index reached five-year high, however, it is better than previous episodes like the GFC, 1990s, and 1980s.

Over the previous month, the unemployment expectation rose by 8.2% and 24.1% over the past year. Headline consumer sentiment recorded a fall of 17.7% in April, reaching 75.6 from 91.9 in the previous month. This marked the biggest monthly fall in the history of the survey. 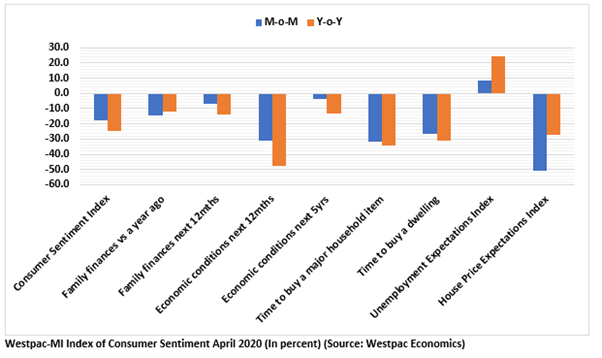 The Australian consumer conviction on the economic outlook for the next 12 months has dropped sharply by 31%, but respondents were more optimistic for the next five-year outlook, which dropped only 3.8%. The survey also highlighted the sharp drop in need of buying a major household item, which plunged 31.6% over the previous month.

Since consumer sentiment and economic outlook is bleak, retailers are likely to offer more value in products due to potential reluctance of larger spending by the Australian households.

Increasing consumer affection towards online shopping might spark a revisiting in capital expenditure plans of retailers. As consumers are increasingly buying goods online, the need to open new stores appears less, and it could save millions for retailers.

However, there is definitely a requirement to reinforce the online capabilities of retail businesses, which would need investments in supply chain, mobile applications, websites, warehouses, and new technologies that would make these investments efficient to generate a healthy return on investment.

Coles Group Limited (ASX:COL) has announced a partnership with Ocado Group Plc to reinforce its online capabilities with technology. It also secured two sites for fulfilment centres in Sydney and Melbourne.

Leading companies across the world have been collaborating with Ocado Group, which provides end-to-end solutions for online capabilities. Its technology-powered systems enable top customer service and operational excellence.

Two sites were secured after a long-term lease agreement with Charter Hall Group (ASX:CHC). The development of two high-tech sites would promote employment, and the sites are expected to be operational by FY23.

On Monday, 4 May 2020, Adairs Limited (ASX:ADH) reported that online sales have been better than expected, recording 221% growth, since store closures dropped.

From 7 May 2020, the company was due to open large format stores with a strong focus on health and safety of the employees. ADH noted that store re-opening would continue during May and June. It has also registered for wage subsidy schemes floated by the Australian and NZ Governments.

Mosaic Brands Limited (ASX:MOZ) has reported to progressively re-open its 1,400-strong stores starting from 11 May. It was noted that trial openings of the stores have allowed the retailer to taste the change in consumer behaviour and store traffic.

It is also working with landlords to agree on leasing terms consistent with the code of conduct for commercial tenancies floated by the Government. And, the company updated that only those stores would be opened where satisfactory commercial terms are agreed with the landlords.

Online sales of the business recorded growth of over 80% over the past six weeks. MOZ expects to report EBITDA loss in the second half and return to profitability in FY2021. It also acknowledged the Government’ JobKeeper scheme.