The fourth week of the first month is nearing its close, and the companies have come up with their earnings guidance for the fourth quarter of the earnings season. Recent country-specific, as well as international events, have only contributed to the ambiguity in the business environment. 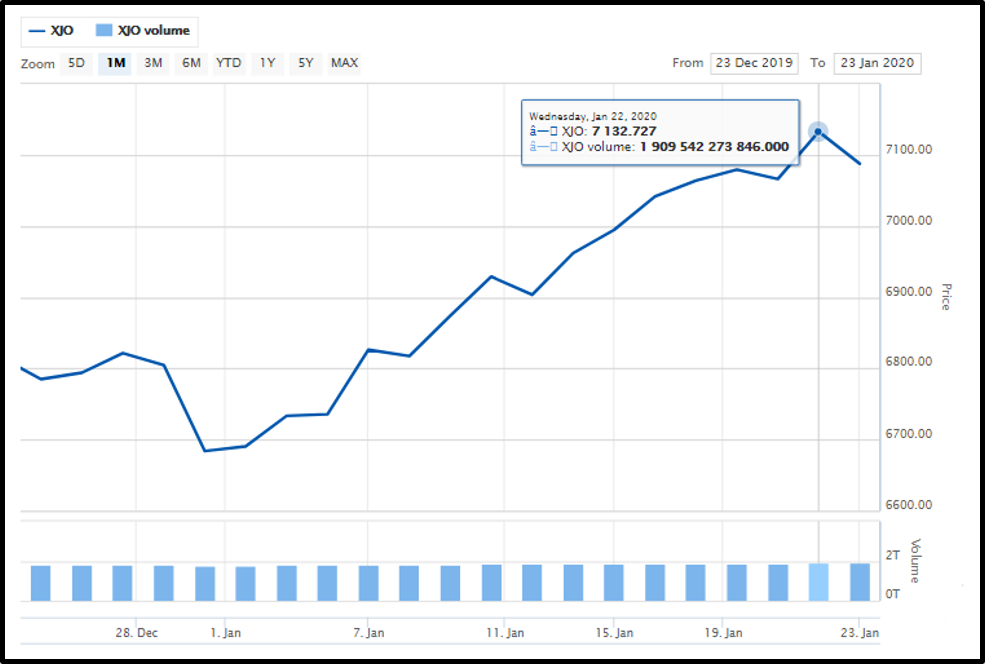 Nevertheless, the ASX has been reaching a record high since the beginning of the new year 2020. As the graph above reads, the S&P/ASX 200 climbed to around 7132 on 22 January 2020. Amidst all the settling international events like the US-China tussle and the Middle East crisis, things may seem like falling in place for some stakeholders. Yet the picture looks misty for the Australian businesses.

The recent factors that can possibly impact the earnings of the Australian companies are as follows:

Firstly, the US-China trade deal is expected to weigh heavy on the Australian exporters as the deal includes increased imports by China from the US, especially in agricultural products as well as LNG. The news about the settling international trade tensions might be hot selling in the market, but for a country like Australia, it might be just the beginning of shrinking exports unless some other opportunity arises.

Read more at: What does Phase one Trade deal means?

Due to the crisis in the Middle East, international companies are closing their operations and rethinking investments. The US-Iran tussle came to a halt after the two parties bombed regions of the other and refused further escalations.

The Insurance Council of Australia (ICA) stated that with losses estimated at $1.34 billion, the insurers had received 13,750 bushfire catastrophe-related claims since November 8.

The further deteriorating natural calamity declared Catastrophe by the ICA is the latest hailstorm in Australia due to which losses caused are estimated at $320 million out of which around two-thirds of claims are for damage to motor vehicles.

The RBA is of the view that the risks in the global economy are still tilted to the downside; some of these risks have diminished. A number of central banks have eased monetary policy over recent months in response to the downside risks and subdued inflation, and Interest rates are very low around the world.

The decreasing consumer sentiment declared by the Westpac Banking Corporation (ASX:WBC) signal towards the cautious behaviour of the consumers in the globally uncertain times. The Westpac-Melbourne Institute Index of Consumer Sentiment dropped 1.8% to 93.4 in January 2020 from 95.1 in December 2019, primarily due to the devastating bushfires.

Amidst the challenging and uncertain business environment, some companies in Australia have cut down their earnings guidance significantly. The companies reporting higher profits have pulled back their profit estimates, and some have even forecasted increased losses. However, there are companies whose earning guidance remain unchanged.

Let us look at some of the companies that have issued their guidance update.

Leading global marketer and manufacturer of branded screening and shading products, Gale Pacific Limited (ASX:GAP) expects a loss of around $3.6 million for the half-year ending 31 December 2019, as compared to previous guidance of a loss of between $1.5 million and $1.8 million, and a profit before tax of $1.3 million for the pcp. The current results are, however, subject to audit review.

The change in the guidance for GAP came as an effect of the following:

The Company believes that the current half year results are disappointing, and the fresh management team shall lay emphasis on profitable growth objectives while the balance sheet remains robust with expectations for a strong cash generation.

Another company that has forecasted reduction in the NPATA guidance for FY20 is Downer EDI Limited (ASX: DOW), a leader in offering integrated services in Australia and New Zealand. With a presence in Asia-Pacific region, South America and Southern Africa, DOW works closely with its customers to design, build and sustain assets, infrastructure and facilities using world-leading insights and solutions.

The Company forecasts a reduction in the earnings due to the following reasons:

The Company believes that the deterioration of the projects at their late stage of delivery is a disappointment and looks forward to growing its service-oriented businesses that require somewhat low levels of capital.

How can we miss on mentioning the worrisome situation in China due to the outbreak of the new coronavirus that is taking a toll on China’s economy? With lockdown in several cities (like Wuhan) in China, including complete lockdown on all modes of transport systems, the business, as well as the life of the people in China, has come to a halt.

There is an increasing number of cases not only in China but in various countries like the US, Thailand, Japan etc. The outbreak of the virus and the pace at which it is spreading currently with clues of its whereabouts in bits and pieces, it might be a huge crackdown on Chinese business as well as Australian businesses in China.

Amidst all this scenario of health calamity and ambiguities in China, the PET business remains unaffected with zero reported cases of coronavirus infection among the Company’s staff.

In the financial sector, the ASX-listed Netwealth Group Limited (ASX:NWL) witnessed an increase of $3.2 billion in its Funds Under Administration (FUA) representing an increase of 12.6% reaching a total of $28.5 billion on 31 December 2019.

Looking at the current scenario of better than expected first-half FY20 results, the Company has increased its outlook for second half FY20 for FUA from $30 billion to $32 billion as at 30 June 2020.

The performance of the S&P/ASX 200 is constituted by companies in several sectors. Notwithstanding the decreasing consumer sentiments, there seems increasing inclination towards the strengthening stock market from the investors. In current times, investors are showing hope in the market as the market continues to be at its peak.