The companies keep notifying its investors with the latest operational updates such as quarterly, half-yearly and full year performance along with its inner workings of the business. These updates help a company to gain the traction of investors. In the below article, we will be looking at some of the companies, that has recently updated the market with their recent operational updates.

Evolution Mining Limited (ASX: EVN) is involved in exploration activities, mine development, mine operations, as well as the sale of gold and gold/copper concentrate in Australia.

The company recently on 2 January 2020 announced that La Mancha Group International B.V. and its associates has made a change of interests in their substantial holding in the company, effective on 31st December 2019 and the substantial holder’s current voting power has decreased to 6.64% as compared to the previous voting power of 7.65%.

A Look at 2019 December Quarter outcomes

On 10 January 2020, EVN provided its operations update to the market wherein it mentioned the preliminary December 2019 quarter results, as follows:

Also, the company has received results from recent grade control and resource definition drilling in the V2 open pit at Mt Carlton, and recognised that the West and East Lode orebodies are narrowing at shallower levels as compared to the previously modelled one. This has led to the completion of a geological review as well as interpretation. The company added that Mt Carlton was planned to generate considerably greater ounces in June quarter this year from the mining of dense, high grade regions in both pit and underground.

The effect on EVN’s FY20 production and cost guidance are that the company’s production would be at the lowest end of guidance of ~725,000 ounces, whereas AISC guidance continues to in between $940 – $990 per ounce.

Ramelius Resources Limited (ASX: RMS) is engaged in exploration, mine development, mine operations as well as the production and sale of gold.

On 10 January 2020, RMS notified the market that it has attained December 2019 quarter production guidance. Some of the highlights from the same are as following:

On 22 November 2019, RMS released Chairman’s address from 2019 AGM and MD presentation. The Chairman mentioned that RMS maintained its recent record of solid financial and operational performances for the fiscal year for the period closed 30 June last year. The company reported net profit before tax amounting to $30.4 million and NPAT stood at $21.8 million for the period.

At the end of FY19, the cash and gold balance of the company stood at $106.8 million. The operational and financial performance of the company was supported by core strategies of RMS, securing its immediate short-term future, as well as building its capacity in the medium to longer term.

Duketon Mining Limited (ASX: DKM) is involved with the activities like exploration and evaluation of mineral resources. The company, recently, announced that Seamus Cornelius has made a change to its interest in the company by acquiring 500,000 unlisted options, exercisable at $0.20, with an expiry date of 30 November 2020, effective from 29 November 2019. The issue of options was approved by shareholders at the AGM of DKM conducted on 28 November last year.

The company, on 9 January 2020 stated that the preparations for an update of the Rosie Nickel Resource has started with the collection of two composite samples for metallurgical testwork. The review of multiple external opportunities is underway. Moreover, a review of development options for Rosie as well as C2 is ongoing. 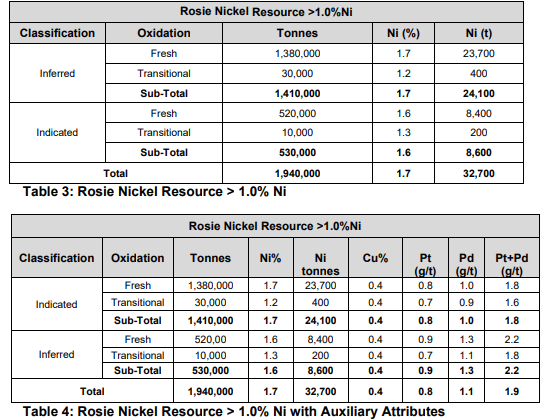 DKM also released the cashflow report for the period closed 31 December 2019. At the end of December 2019 quarter, the cash balance of the company stood at $20.8 million. The net cash used in operating activities stood at $0.768 million, after settling major payments for exploration & evaluation of $0.601 million and staff costs amounting to $0.154 million.

DKM remains excited at the Nariz Nickel prospect of drilling more holes directly into and along strike from Nariz and is encouraged by the DHEM interpretation, as well as drilling results which showcases the potential for more significant mineralisation in the system.