The property market of Australia generally includes trade of land as well as fixtures within Australia. The market also comprises REITs, which play a prominent role in the sector.

In the below article, we will look at some of the ASX-listed property stocks with their recent updates:

Charter Hall Long WALE REIT is an ASX-listed REIT engaged in making investments in Australian real estate assets. On 10 February 2020, the company updated the market with its operational and financial performance for the first half of the financial year 2020 and outlined the following:

H1 FY 2020 has proved to be a very active period for the company, where it reported operating earnings of $52.2 million, reflecting a rise of 8.5% as compared to the prior corresponding period. Charter Hall’s statutory profit stood at $80.5 million.

During the period, CLW experienced a growth of around $1.44 billion in the total property portfolio, leading to a portfolio of $3.59 billion. This increase has been generated by $1.37 billion of net acquisitions and capex and $83 million in property revaluations. 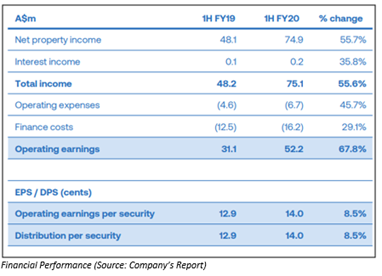 Scentre Group is engaged in the development and management of properties, including living centres, across Australia and New Zealand. The group officially listed on the Australian Stock Exchange in 2014. The company recently announced that it had scheduled to conduct its 2019 Annual General Meeting on 08 April 2020.

In another update, Scentre announced that it has made an acquisition of 50% interest in Garden City Booragoon for a consideration amounting to $570 million. This acquisition includes long-term property management, brand and development rights.

Previously, AMP Capital Diversified Property Fund was a 100% owner of Booragoon. Now, AMP Capital Diversified Property Fund and Scentre Group are currently 50-50% joint venture partners. It is anticipated that the transaction will be marginally accretive to earnings of Scentre Group from 2020 and would increase gearing to 31.7%.

With respect to the outlook for FY 2019, the company is expecting a Funds from Operations (FFO) growth per security of 0.7% and a distribution of 22.60 cents per security.

GPT Group owns as well as manages a portfolio of retail, office and logistics property assets throughout Australia. The company’s portfolio is worth ~$24.8 billion.

GPT recently released its results for the financial year ended 31 December 2019 (FY 2019) and outlined the following:

Viva Energy REIT owns and leases freehold properties, including service station sites. The company was officially listed on the Australian Stock Exchange in 2016.

Viva Energy announced recently that it would be releasing its results for the full year ended 31 December 2019 on 20 February 2020.