Private Insurers and APRA differ in their Industry Outlook: A look at the Industry challenges

In a speech given on 04 February 2020, Mr Geoff Summerhayes, a member of the Australian Prudential Regulation Authority (APRA), said that there are conspicuous factors that are making it hard for private health insurers (PHIs) to maintain sustainable growth in the future and that consolidation might be the only way out, especially for the smaller players. These factors include higher claims costs, falling hospital coverage, and a declining trend in younger population opting for private health insurance, among others.

The PHIs and private hospitals didn’t take Mr Summerhayes comments too kindly and stated that the comments were made without being well informed about the industry and thus leading to negative sentiment around the health insurance industry.

In this article, we will look at the challenges that the private health insurance industry is facing and if it is in the ‘death spiral’ situation, as highlighted by a Grattan Institute study in 2019.

Mr Summerhayes, in his speech, highlighted some of the key concerns the industry is grappling with, to support his claim that the issues at hand are palpable, serious and threaten the sustainability of the industry. He said that while the situation is not alarming and that the companies have been maintaining profitability, the negative trends must be looked at and addressed going forward. Some of the key challenges include of the following:

According to APRA, there has been a considerable decline in hospital treatment coverage with 44.1% coverage as of 04 February 2020 compared to 45.5% in March 2018. The coverage rate is at the lowest in the last 12 years.

The authority highlights that the primary reason for the decline in coverage is that each year, more and more young individuals (age group: 20-34 years) are opting out of private insurance plans which brings us to the second major challenge of the industry – a shift in demographic data. 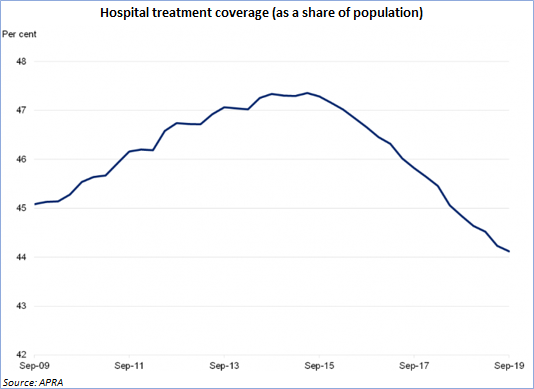 According to data provided by APRA, ~127,000 policyholders in young population group have exited the private health system over the past 24 months. While this dwindling figure is negated by the rising number of policyholders in the 70-84 years age bracket, it has a negative impact on the industry from an economic standpoint. 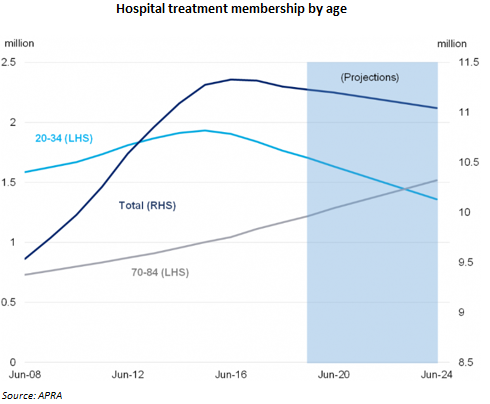 For APRA, the higher growth in claims costs compared to the growth in premiums is a concern that requires immediate attention.

Data provided by the industry indicates that while the claims cost has been rising at an average of 5% per year, the insurance premiums in the last two years have only increased by 3.25% and 2.92%, respectively. This increasing difference in growth leads to the widening of the gap between costs and premiums, which has a direct impact on PHIs. Also, as mentioned earlier, the increase in policyholders in the 70-84 years age group has a negative impact in the sense that they are the ones who usually claim the maximum benefits. With a growing number of aged policyholders, the claims costs will increase as well.

At present, PHIs are bearing the burden of increasing costs. To focus on business continuity and sustainability, they have indirectly passed the load to the policyholders through an increase in exclusions and excesses and getting rid of certain products.

APRA believes if the gap between growth in claims costs and premiums continues to increase in the next couple of years, most of the PHIs will find it difficult to maintain their respective businesses and three of them might survive.

The viewpoint of private hospitals and insurers

Private hospitals and PHIs have disagreed with Mr Summerhayes citing that the comments were “ill-informed and inflammatory” and that they might affect the public confidence in the industry. They believe that members of the authority do not understand how a not-for-profit business model functions and that even a 1% profit margin is enough for such companies.

A member of the Australian Private Hospitals Association said that the not-for-profit funds are stable with adequate capital to continue growing at a rate that could be faster than the industry.

The industry believes that APRA, instead of its comments that worsen the sentiment towards the industry should focus on reinstating the confidence of citizens.

While the insurance players and executives think that APRA is pushing for consolidation and that they want to restrict mental illness coverage, an APRA spokesperson said there were no recommendations made.

Recent Updates in the Industry

On 07 December 2019, the Australian government announced that the premium change 2.92%, lowest in 19 years, will be effective 01 April 2020. The government aims to make private health insurance simple and more reasonable for the citizens. The government’s reforms include concessions for the younger population, improved access for citizens in regional areas, healthier access to mental wellbeing, a less complicated classification system for policies, and price cuts for medical devices.

The price cuts were a part of an agreement between the Medical Technology Association of Australia and the Australian government, which aims to reduce the cost of medical devices by ~$1.1 billion by 2022.

Death Spiral or not?

In a paper published by Grattan Institute’s Stephen Duckett and Kristina Nemet in July 2019, the authors stated that the private health insurance industry is in a death spiral and that there is an urgent need of policy reforms. The paper highlights that citizens are dissatisfied with PHIs and are increasingly opting out of insurance plans. The authors lay emphasis on the government’s role in setting clear roles for private as well as public health. APRA’s Mr Summerhayes, in his speech, agreed with the critical points highlighted by the author.

While APRA’s statistics might be telling the real story with respect to the struggles and future challenges for the private health insurance industry, the government has already started taking steps to address the challenges. It has come up with reforms to continue improving the private healthcare by making it more affordable and offer more value to the customers.

Regarding the ‘death spiral’ situation, Mr Greg Hunt, the Australian Minister for Health, said that is it just an exaggeration and that the situation is not as bad as people make you believe.