Four Stocks to look at:

Every Investor has some pet stocks, on which the investor put his focus regularly. Some key points, which are considered by an investor for those stocks such as their latest earnings, operational update and any dividend announcement as well as stock performance.

Steadfast Group Limited (ASX: SDF) is involved into the provisioning of services to Steadfast Network brokers as well as the distribution of insurance policies via insurance brokerages and underwriting agencies. As per the release dated 27th August 2019, the company announced that it had issued 29,585,799 fully paid ordinary shares to certain professional and sophisticated investors in relation to a fully underwritten institutional placement. In another update, the company announced that it has successfully wrapped up the institutional placement in order to raise an amount of $100 million. The issue price for the share in the institutional placement was $3.38 per new share.

A look at the financial year 2019 performance

The company reported strong performance in FY19 with the growth of 17.8% in underlying EBITDA, which was being driven by organic growth of 10.9% and acquisition growth of 6.9%. The company delivered underlying net profit after tax amounting to $89.2 million, reflecting a rise of 19.0% and posted underlying NPATA of $114.1 million with a rise of 17.3% compared to the year-ago period.

The Board of the company has declared a fully franked final dividend of 5.3 cents per share, reflecting a rise of 12.8% year over year. The FY19 total dividend of fully franked 8.5 cps is up 13.3% from the previous year, equating to a dividend payout ratio of 76% of underlying NPAT.

The company is expecting Underlying EBITA in the range of $215 million -$225 million and Underlying NPAT to be between $100 million-$110 million and growth in the vicinity of 5%-10% in underlying diluted earnings per share.

On the price performance front, the stock of Steadfast Group Limited closed at a price of A$3.870 per share with an increase of 0.781% on 6th September 2019. In the time period of one month and three months, it indicated an increase of 4.92% and 23.08%, respectively.

Macquarie Group Limited (ASX: MQG) provides financial services like banking, advisory, investment and funds management. Recently, the company, through a release dated 4th September 2019 announced that it intends to conduct a Share Purchase Plan. Under the terms of SPP, the company would be offering the opportunity to eligible shareholders for participating in a Share Purchase Plan, which not underwritten. However, the maximum application size of $15,000 per eligible Shareholder will be accepted by the company. It added that the new shares issued under the Share Purchase Plan would be offered at the lower of the Placement Price; and a 1% discount to the VWAP (Volume weighted Average Price) of the companyâs ordinary shares traded during the five ASX trading days immediately prior to and including the SPP closing date.

In another update, the company stated that it has successfully wrapped up its $A1.0 billion institutional placements, which was conducted by the book-building method. Under the institutional placement, the company will be issuing 8.3 million new fully paid ordinary shares at a price of $A120.00 per new share, which reflects a 2.8% discount to the last closing price of $A123.51 on Tuesday 27 August 2019; and 2.8% discount to the 5-day VWAP of $A123.46. 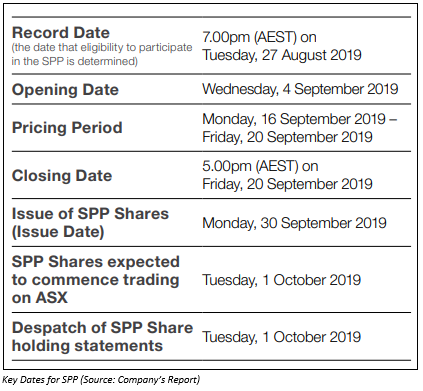 The company further stated that the proceeds raised from the Placement and the SPP would provide the company with the flexibility to invest in new opportunities, provided the projected risk-adjusted returns are attractive for shareholders while maintaining appropriate capital levels considering the ongoing regulatory change.

The company also updated the market that the company and its controlled bodies corporate has ceased to become a substantial holder in Gold Road Resources Ltd, which became effective on 27th August 2019.

The Groupâs short-term outlook for 1H FY20 and FY20 primarily remains subject to the completion of transactions and period-end reviews and the impact of foreign exchange.

Incitec Pivot Limited (ASX: IPL) is into manufacturing and distribution of industrial explosives, industrial chemicals and fertilisers as well as provisioning of related services. As per the release dated 2nd September 2019, a strategic review of its Fertilisers Asia Pacific business segment has been started by the company. The company stated that it is the pre-eminent distributor of fertilisers in Australia, as well as the sole manufacturer of phosphate fertilisers and the only producer of nitrogen fertilisers on the East Coast of Australia. The following picture provides an overview of total recordable injury frequency rate (TRIFR): 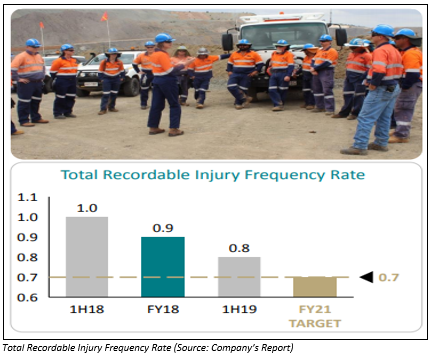 It was also mentioned in the release that the company has achieved decent progress on several operational issues as well as strategic milestones during FY19, which primarily include other arrangements as well as negotiations of various gas supply in order to allow the continuation of manufacturing operations at Gibson Island.

Considering the publicly available actual pricing and foreign exchange rates, the company lowers the FY19 EBIT range to between $321 million and $366 million as compared to previous guidance of $370 million to $415 million Earnings Before Interest and Tax. There was no change provided by the company to the guidance in relation to the interest expense of $145 million. The anticipation for the effective tax rate is likely to be lower at around 5%, on the back of the financial impact of the adverse events during the year.

BlueScope Steel Limited (ASX: BSL) is globally recognised as the manufacturer of premium branded coated and painted steel products with a market capitalisation of A$6.57 billion as on 6th September 2019. As per the release dated 30th August 2019, the company updated the market that the company and its ex- employee Mr Jason Ellis has been alleged by Australian Competition and Consumer Commission for non-compliance of cartel provisions of Australian competition law. The company further stated that the above-stated the ACCC proceedings have been conducted in relation to the involvement of Mr Ellis who, during the stated period from September 2013 to June 2014, attempted to induce several steel distributors in Australia as well as offshore manufacturers in order to enter agreements containing a provision of price-fixing. However, the company is defending the proceedings very well.

Operational and Financial Performance for FY19

In the financial year 2019, the company has released five-year Health, Safety and Environment strategy, wherein it is having a greater focus on severity of injury and care taken to return its employees to meaningful work as well as it is building on a strong culture of learning, trust and inclusion. The company is rigorously challenging the effectiveness of its significant risk control measures. Looking at the financial performance front, the company reported a net profit after tax amounting to $1,015.8 million, and an underlying net profit after tax of $966.3 million, reflecting a rise of 17% from FY18.

When it comes to creating the value of its shareholders, the company is very well focused on producing returns above its cost of capital. It reported underlying pre-tax ROIC (Return on Invested Capital) of 19.5%, reflecting a marginal fall in comparison to 20.0% of FY18. The operating cash flow, after capital and investment expenditure, was very strong and stood at $1.3 billion. The Board of the company has declared an unfranked final dividend amounting to 3 cps

The company is well placed in strong, economies which are developed, as well as in high growth areas throughout Asia. With respect to North Star, the company anticipate a softer result on average benchmark spread through 1H FY20, around US$90 per tonne, which is lower than 2H FY19. When it comes to New Zealand & Pacific Steel, the company is having anticipation of better results, which will be primarily resulted by cost improvements and favourable timing of scheduled maintenance. In terms of Australia Steel Products, it is being expected to be offset in part by a modest improvement in domestic volumes