In an exchange release on 2 December 2019, Pioneer Credit announced that the Standstill Agreement with its senior financiers expired today - 2 December 2019. Pioneer Credit reported that the company is nearing completion of its assessment of proposals for a change of control and the provision of financing and the senior financiers have agreed to work with the company.

What has happened with Pioneer Credit?

In 2019 Annual General Meeting, the Chairman of the company acknowledged the disappointment of shareholders in relation to the full-year results of PNC.

In the year ended 30 June 2019, the company continued its weaker first-half performance and strong second-half performance, and EBITDA for the period stood at $63 million with the first half being softer than usual.

The Board believes that a major issue was the qualification of the accounts. In February 2019, the auditor of the company advised having the companyâs half-year financial accounts qualified due to the uncertainty over the accounting method to be used in the full-year due in August 2019.

Pioneer had been in discussion with ASIC in the first half, and ASIC enquired on the basis of the companyâs use of fair value method; the company shared its reasoning, international experience and advice.

After thorough discussions, ASIC directed the company to use the amortised cost method in line with this sector. However, ASIC also believed to consider the opinion of senior counsel engaged by Pioneer. Meanwhile, ASIC was prepared to have the company reporting fair value at the half year.

Broadly, companies have two ways to report credit impaired assets or Purchased Debt Portfolios (PDPs), in this case. Prior to listing, the company had taken expert advice from leading firms including its auditor on the decision of amortised cost vs fair value.

The advice had been clear and consistent; the best explanation of the companyâs financial reporting was fair value through the profit and loss account. Until the first half-year audit in 2019, the view was also supported by the auditor.

The company made the decision to change the fair value to amortised cost and changing from classification and measurement involved the construction, interpretation, and management of a highly detailed collection of models.

Pioneer also engaged Deloitte to assist the company in making the transition to finalise the account for auditors, following which, the auditors completed their process and the Board had a visibility of the audit view to finalise the full-year accounts.

What has changed Financially?

An important part of the audit process was the discount rate to be applied, which in turn would affect the statutory net profit. The utilisation of discount rates arising from modelling changes the timing of when the profit is reported, and the timing and amount of cash flow generation do not change under either fair value or amortised cost.

The Board and Management believes that regardless of the method chosen, cash recognition remains the same. The process involved the application of a new accounting standard, which required modelling of over 900 discrete portfolios acquired over a 10-year period and hundreds of individual accounts.

With these being impaired accounts, whereby the customers have experienced difficulties in meeting the payments on their obligations; the companyâs auditors and advisors took a lot of time and analysis.

On 23 August 2019, the company was made aware that, under the amortised cost, there would be a material difference in the expected profit and the previously disclosed profit to the market. Subsequently, the company informed the market and requested trading halt, then suspension, until the time full-year results were released to the market.

The bankers of the company were made aware about the material difference in the profit under amortised cost; this resulted in a breach of a covenant with bankers which informed to issue a breach notice and review facilities going forward.

How is the company progressing?

Parallelly, the company and its advisor Azure had been engaged in assessing proposals for a change of control and the provision of funding, following the company received a non-binding indicative offer earlier this year.

The funding has been a key enabler in pursuing growth opportunities through facilitating the purchase of PDPs. Therefore, it was important to consider the future of the capital structure of the company, as domestic credit availability began to tighten with the withdrawal of a number of the Big Four banks from financing the sector.

Whole sector and not just Pioneer were experiencing the reduced debt funding from bank facilities. Considering this, the Board undertook a robust, comprehensive process of soliciting and assessing proposals from domestic and international parties to ensure the best outcome for shareholders.

It was reported that the negotiations are ongoing with multiple parties, and a transaction finalisation is expected in the near-term. The company expects to decide on the preferred bidder, and then move to a recommended transaction for shareholders that would enable the realisation of value for all.

Despite all these headwinds, the company is focused on achieving good outcomes for the customers, and it remains a significant purchaser in the market that has never witnessed an adverse outcome from the Ombudsman even in the wake of Hayne Royal Commission.

In FY 2019, the company reported a net profit after tax of $4.3 million compared to $17.6 million in the year ago period, when accounted using fair value through profit or loss in the previous year. Cash liquidations for the period were $118.5 million. 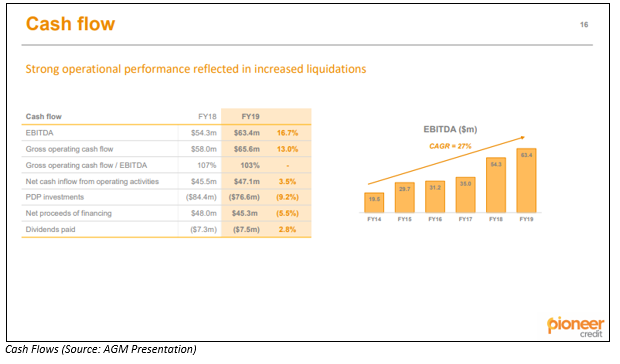 At the year-end, the company had net assets of $102.7 million which consist of $92.7 million of current PDPs due from customers that would be realised in the coming twelve months. The company had a cash advance facility limit of $130 million, of which $129.7 million was borrowed.

Pioneer had issued $40 million in medium-term note programme on 22 March 2018, scheduled to mature on 22 March 2022 with an option of repayment at 101% par with any accrued interest one year prior to maturity.

The stock of the company remains suspended from trading purposes on ASX.