Australian resources exports are expected to hold up in 2019-2020 against the volatile commodity markets. As per the Resources & Energy Quarterly September 2019, the exports numbers have been revised to $258 billion for 2020-21 in comparison to $282 billion in 2019-20, the decline accounting mostly to the stabilising of iron ore production from Brazil following the Vale’s Brumadinho tailings dam fallout leading to oversupply. The gold export earnings are set to increase by a third to $25 billion in 2019-20 and will experience good annual spending on building new mines and expanding the existing ones. 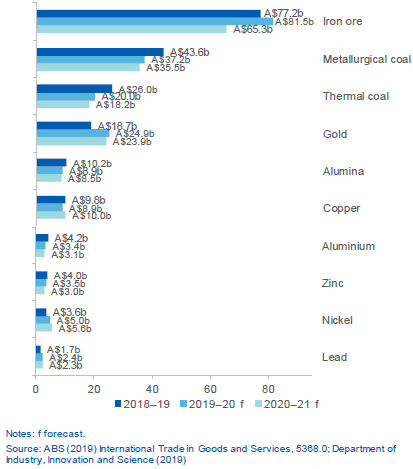 In the midst of US-China trade war, some analysts have started to question the popular statement of “right place at the right time” by the Australian white paper with reference to the massive social and economic changes in Asia led by China. The world economies including Australia have arrived at the crossroads to take hard decisions due to the trade war between the most important strategic ally and the most important trading partner.

The trade war started with tariffs on steel and aluminum, now has grown intractable with time. The trade war has not only been bad for Australia, the high value export commodities such as iron ore and coal have continued until now. The exports will remain stable as China increased spending over infrastructure to nullify the effects of Washington policies.

The trade figures have been overwhelming as Australia recorded its first current-account surplus in second quarter of this year since 1975.

This provided the much-needed confidence to the investors to invest in the economy which recorded the slowest GDP growth in the same quarter. Other US allies such as Germany have experienced decline 8% in exports earlier this year and decline in the current account surplus. 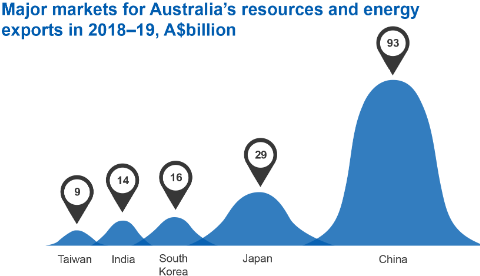 With China being one of the poles of the trade war, Australia needs to maintain a balanced strategic relationship with both the superpowers to ensure its interests.

The currency has also dipped to a decade low due to strengthening of US dollar is helping the commodities such as coal, iron ore which are traded in USD thereby increasing their value in the local currency.

The core markets for Australian exports continues to be China, the country has also been experiencing growing order from India where the iron ore consumption would increase from 200 Mt in 2018 to 230 Mt by 2021.

The prices swung significantly exceeding 120 $US a tonne as Chinese steel makers hastened for supplies in June and fell roughly by 31% by the end of August as they stockpiled, due to supply from the Vale’s Brazilian operations. With the decrease in the supply of high-grade ores from Brazil, the Chinese steel makers switched to the lower grade ores, further increasing the prices and decreasing the spread between high grade and low-grade ore prices. The prices will continue to fall and then stabilise in 2020 as the supply recovers and the Chinese steel alleviates.

The metallurgical exports increased to 183 million tonnes in 2018-19 with supply issues due to weather, infrastructure and temporary shutdowns. The exports are expected to increase to 188 mt and 198 mt in the upcoming years mainly, due to restarts and capacity addition in the Bowen Basin. Anglo American has started working on the resumption of operations at the Aquila mine which had been stalled in 2013.

The exports of metallurgical coal to China will vary in correlation with steel production. India on the other hand has low steel usage per capita, and under the current regime has been trying to increase its steel production for which an increasing share of exports could be expected to India, which has limited domestic reserves for coking coal and might even overtake China to become the largest importer of metallurgical coal dethroning China. Demand can be expected to be stable or slightly lower for most of the major importers, but the increase from India will play very crucial role in the market dynamics for metallurgical coal.

The surge in demand has driven up the prices of thermal coal growing the export volume to 210 million tonnes in 2018-19 due to improved production efficiency and ramp of projects such as Mt Pleasant mine. The exports are expected to increase to 211 Mt and 214 Mt in the upcoming years.

The demand of thermal coal from China has softened due to weak power demand as the economy is experiencing high growth in nuclear and hydel power plants feeding the energy hungry dragon. Further decline in demand from China, could be expected due to the increasing domestic production.

India, which is the second largest imported of thermal coal experienced higher exports to India to feed its thermal power plants driven by high growth in power demand and the government efforts to maintain the reliability of electricity up to the general elections held in May 2019. Also, the domestic production which does not match the power demand slowed down during the monsoon months, further increasing the dependency on importing thermal coal.

The metallurgical coal has been hit by oversupply in the recent quarters due to weak Indian demand and Chinese import policies leading to slump in prices. The metallurgical coal prices will modestly ease in 2020. Low spot LNG prices led to a switch from coal to gas mainly in Europe, therefore adding to the weak thermal coal demand. Prices for thermal coal will stabilise in 2020 once there is improvement in market dynamics.

Gold exports are expected to increase to 368 tonnes, a record value. The gold export from Australia stood at 326 tonnes in 2018-19, a 22 tonne decrease mainly due to the sharp decrease in demand from Hong Kong which roughly halved in the year. The Chinese authorities might restrict gold imports into the country which could affect the scenario for the upcoming years.

The healthy growth in gold prices has boosted up the morale of the investors and the mining companies to undertake new projects and revamp the existing ones. The gold production increased to 321 tonnes in 2018-19 largely due to the revamping of large mines such as Newcrest owned Cadia Valley.

A few mines in increased production due to higher head grades such Newmont’s Tanami while a few did experience lower head grade such as in the case of Boddington and Superpit operations. Multiple new projects are expected to start operations in 2020 and upcoming years such as Mcphillarnys gold mine further increasing the production capacity.

Australia is known as the second biggest producer in the gold space around the globe. With the volatility in bulk commodities prices, the gold served as the safe haven for the investors and crossed US$1,500 an ounce in August 2019.

The demand for gold will continue to increase in 2020 from banks, investors and for jwellery especially with supply glut in iron ore and coal which are the top two commodities by export volumes. The gold price can be expected to rise even more in 2020 due to trade tensions, rising geopolitical tensions and gold serving as a safe bet among other commodities.

Australia holds roughly 17% of the world’s cobalt resources and is the third largest cobalt producer, therefore hosting huge opportunities for cobalt extraction from existing mines and new discoveries. 57% of cobalt is used in batteries while remaining are used for alloys and other applications.

The biggest producers of cobalt are Democratic Republic of Congo (69%), Cuba (3.7%), Australia (3%) and Philippines (3%). The DRC which is politically unstable almost exclusively supplies its cobalt production to China is also internationally charged for issues of artisanal mining in which workers are made to work in inhuman conditions. Also, the new mining tax regime poses risk to the existing and new mining operations.

In terms of refining capacity, Australia is fifth largest across the globe. In 2019, Australia’s production of mined cobalt stood at 5,500 tonnes registering a 10% growth in comparison to 2018.