Regulations are the abstract management concept that undoubtedly controls the way a business conducts itself, within and outside. It helps all parties related to the business world to be constantly vigilant about their work and adhere to rules and policies, as expected for smooth functionalities.

However, to err is human and businesses do go off-track at times. This is the reason economies have watchdogs in the form of regulatory authorities which are guardians of the business world.

Todayâs article revolves around financial services player PayPal, who has recently come under the lens of AUSTRACâs (The Australian Transaction Reports and Analysis Centre) scrutiny and has been accused of being involved in online child abuse material and breach of the anti-money laundering laws. Before understanding the details of the matter, let us get a brief knowledge of the two bodies under discussion:

An international funds transfer platform aimed to democratise financial services, PayPal believes that having access to financial services creates opportunity and has its corporate headquarters in San Jose, USA.

The company trades on the NASDAQ and has been operating in Australia since 2005, with the current active customer base over 7 million. The company aids businesses to transact online and offline, and globally, the open digital payments platform has 277 million active account holders and is available in more than 200 markets.

PayPal amalgamates tech innovation along with strategic alliances to formulate conducive ways to handle and transfer money and is a flexible forum which offers options to customers, while they pay or get paid.

A renowned and respected Aussie watchdog, Australian government agency and regulator, The Australian Transaction Reports and Analysis Centre (AUSTRAC) makes use of financial intelligence and regulation to keep a check on terrorism financing, money laundering and likewise serious crimes.

It is Australiaâs financial intelligence unit, and has three main goals, depicted below: 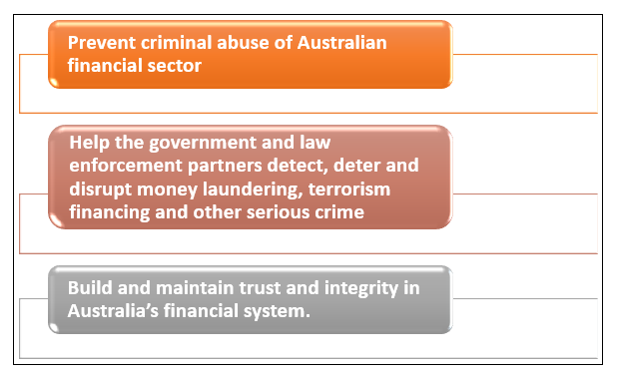 On 24 September 2019, AUSTRAC notified that it had instructed to have an external auditor on board, who would investigate the on-going issues pertaining to the companyâs Australian segment compliance with the AML/CTF Act. The concerns pertain to the PayPalâs adherence with the IFT Instruction reporting requirements, which is bound to be adhered to.

AUSTRAC CEO Ms Nicole Rose PSM stated that the regulated enterprises like PayPal Australia, make financial transactions possible for millions of locals annually, and have a crucial role to play in helping AUSTRAC and its law enforcement associates to break money transfers to offenders and terrorists.

However, in the event of non-compliance, the watchdog is but bound to act in order to safeguard the Australian community.

AUSTRAC suspects that PayPal might have been utilised to facilitate online child abuse material. It should be noted that child sex exploitation is the risk that prompted the regulatory intervention and the need of a compliance audit, as PayPal has been working with global crime agencies.

AUSTRAC believes that virtual child abuse material could be easily ordered by offenders from the Aussie land to areas like the Philippines via PayPal, offering money.

The PayPal platform is widely used for funds transferred in and out of the country (international funds transfer), making the allegation seem possible.

This implies a potential anti-money laundering law breaches, which is not accepted by the regulatory body, besides an allegation on PayPal for facilitating serious crimes like child exploitation. AUSTRAC notified that a possible breach, if proved, could result in fines, compliance actions or criminal prosecutions.

The Course of Action

The company would appoint an external auditor to examine and further conclude the hovering concerns and is obligated to report to AUSTRAC within 120 days of being appointed.

The extent of examination would be at the discretion of AUSTRAC and the expenses of the external auditor would be borne by PayPal Australia. Three areas would be thoroughly exposed to this scrutiny, which are:

The result would aid the company with its compliance and notify AUSTRAC about a need for any further regulatory engagement. The regulator would work closely with the company through the course of the scrutiny event and address any compliance concerns, as and when required.

PayPalâs Take on the Allegation

According to media sources, PayPal Australia believes that the allegation posed by AUSTRAC on the company would have no impact on customers, who could continue to use PayPal services as usual.

Meanwhile, the company would work in requisite cooperation with AUSTRAC to settle the issue and undergo the ordered audit in the defined timeframe.

The company further stated that it had been a self-disclosed entity, which intimated the AUSTRAC about the issue pertaining to the international fund transfers, post an internal audit.

The APT Board had established a Sub-Committee charged with assisting and reporting to the Board about the oversight and management of the external audit process.

Mr Neil Jeans of specialist firm AML/CTF firm Initialism (Melbourne-based) was on-boarded as the external auditor to undertake the audit.

Moreover, to ease the audit process, APT had requested shareholders to defer a pre-planned SPP, until the examination was complete.

The interim audit report is expected to arrive by 24 September 2019, while the final audit report would be released a couple of months later (23 November 2019).

PayPal Holdings Inc trades on NASDAQ under the ticker PYPL. After the trading hours on 23 September 2019, the PYPL stock quoted US$105.11, closing the dayâs trade up by 0.45 per cent. The companyâs market capitalization is US$123.68 billion and the stockâs P/E ratio is 49.87x.

Market experts await to witness the share price and stock performance on 24 September, and the unfolding of the investorsâ sentiment towards PayPal, right after the AUSTRAC order has come in.