In addition to the above, the ACCC may abstain from granting authorisation unless it is satisfied that either:

On 8 November 2019, Australian Competition & Consumer Commission (ACCC) happened to decide for not opposing the proposed merger of Fairfax and Nine Entertainment Co. Holdings Limited (ASX: NEC), later to which from 10 December 2019, Nine Entertainment and Fairfax Media have merged to form one business known as âNineâ, and has become the biggest listed-media company on ASX, with an array of multi-platform assets across television, subscription video on demand, digital, print and radio.

Announced on 26 July 2019, NEC was of the view that the merger would unravel the potential for significant value creation through the blend of the content, brands, audience reach and data across the respective businesses.

Acknowledging Nineâs solid operating drive that has empowered it to invest in the future of its business; Nine CEO Hugh Marks believes that the merger with Fairfax will make an addition of another dimension, building a unique, all-platform, media business that will have its reach to above half of Australian population every day via different mediums like television, online, print and radio.

With the stage being set, let us get to the latest build-up in the Australian media industry.

The latest development in the Australian media sector took place in regard to another merger of two media companies, Seven West Media Limited (ASX:SWM, a national media company with commercial television, publishing, radio and digital operations and Prime Media Group Limited (ASX:PRT), through a 100% scrip-based Prime scheme of arrangement.

The merger was announced on 18 October 2019 with a view to delivering the following value creations for its parties: 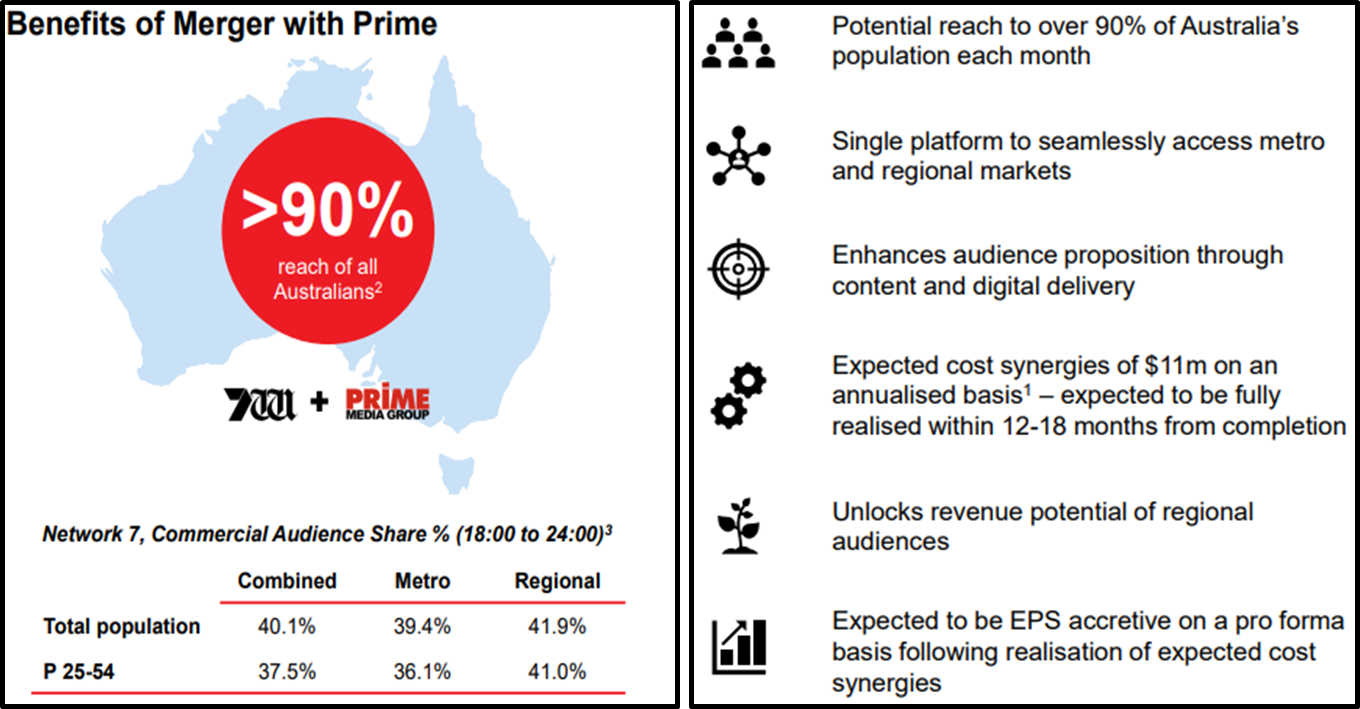 For the implementation of the merger, the Scheme Implementation Deed contained customary terms and conditions on which SWM and Prime proposed to implement the scheme are as follows:

On 9 December 2019, the Seven West Media declared its intentions to determine for the payment of a 100% franked special dividend of $0.03/share, subject to the scheme of arrangement through which SWM proposed to buy Prime becoming effective.

With an opportunity of prominent compelling reasons for the merger of Seven and Prime, if the scheme is approved and implemented; Prime shareholders were expected to benefit from receiving the Special Dividend (together with any available franking credits).

Recently, the ACC has declared that it shall not oppose the proposed Seven West Mediaâs acquisition of Prime Media Group, based on the anticipated action that Seven West Media shall divest its Spirit and RedFM radio networks in regional Western Australia to a third party to meet requirements of the Broadcasting Services Act 1992.

However, the scheme Meeting is expected to progress as scheduled and planned be held at 10.00 A.M. (Sydney time) on 19 December 2019.

In case the scheme is not approved, it is anticipated that Prime and Seven shall consult in accordance with the terms of the Scheme Implementation Deed, and a further intimation shall be made with respect of the outcome of the consultation once finalised.

Prime looks forward to working with Seven in the future and appreciates a long-standing relationship with Seven.

With such influential speculations already surfacing, will we witness another merger in the Australian Media and Advertising space?