Bushfire is a term used for a destructive fire in a scrub that is triggered by natural disasters like lightning or extreme weather induced by changes in climate, or other human events. The individuals and communities who are affected by a bushfire can experience various behaviours, feelings and thoughts which could be frightening, intense, confusing and might have a major impact on the mental health of the victims.

The trauma of watching the devastation of one’s home and losing loved ones and pets can give rise to anxiety and depression. The outcomes of such a drastic event can be severe and at their worst during the initial few days post the event. Nevertheless, in most of the cases, the reactions fade in over a month. If the routine functioning is seriously affected for more than a month after the event took place, it is important to discuss the issue with general health care practitioners or mental health professionals. The most common reactions include: 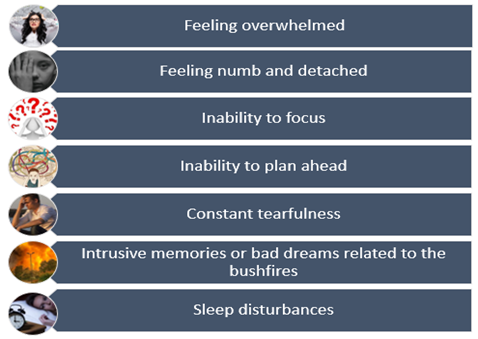 One of the biggest ASX-listed health care sector player CSL Limited (ASX: CSL) has pledged a donation of approximately $500,000 that will help in providing the urgent requirements to the victims (people as well as wildlife) affected by the bushfire crisis in Australia. Funds provided by CSL will be channelled via the State based fire authorities, the Australian Red Cross and wildlife agencies.

While the support in the form of money would definitely help the victims, such incidents also have consequences related to mental stability, and thus, it is also crucial to provide support to the sufferers by offering them mental care. Chronic stress or mental illness, regardless of reason, can damage parts of the brain that are involved in the monitoring of reasoning and self-control capabilities, which could lead to more impulsive behaviour and an enhanced possibility of addiction.

According to WHO review in 39 countries and 129 studies, it has been observed that among individuals who had suffered war, fire, or any other natural or man-made disaster in the past 10 years, one in five individual (22%) had anxiety, schizophrenia, post-traumatic stress disorder (PTSD), depression or bipolar disorder.

According to the review, the approximate prevalence of mental disorders among conflict-affected communities, or populations at any specific point in time, is nearly 13% for mild forms of PTSD, anxiety and depression, and 4% for moderate forms of these conditions.

As per WHO, the effective emergency responses which should be considered after the disaster are:

In October 2017, after a Wine Country fire in Northern California, the victims were in an emotional mess and the number of victims that were provided mental health support in Sonoma County had almost doubled. During the first month after the incident took place, 125 behavioural health practitioners provided approximately 13,000 hours of counselling to sufferers. On an average, about 40 workers stayed in the field in a day.

During the tsunami that hit Asia towards the end of 2004, it was observed that in Sri Lanka, among the survivors, mental health was one of the major problems. This resulted in a transformation in the mental health system for which WHO supported the government of Sri Lanka. Together, they looked for the most important innovations given the scarcity of mental health human assets such as different groups of the committed mental health team. As a result, at present, a total of 20 districts out of 27 have mental health service infrastructures, which were only in ten districts before the tsunami.

The Government of Australia is concerned with the impact of bushfire and is aware of mental sickness that the victims will be suffering from. For this serious issue, the government has revealed a mental health package to deliver immediate, short, as well as medium-term mental health assistance for the communities, families and individuals affected by the bushfire crisis.

The Australian Government will provide funds of approximately $76 million for distress counselling and mental health support for the affected individuals, families and communities. These include:

The government is planning to initiate a program to offer instant counselling and assistance to affected individuals, families, and emergency services workers. This program will be termed as Bushfire Recovery Access Program and will allow the victims the best option to complete mental health improvement from highly traumatic bushfire incidents.

Implementing targeted psychosocial/mental care is crucial following any natural disaster as it seems to be a more focused and direct approach to solve the problems which could lead to long term impact on sufferer’s health.