Safe and well-developed products build the trust of the public. For this, materials that are of good quality and adhere to industry standards are required. Let us discuss three stocks operating in the materials sector, with one - BLD - focusing on building and construction materials, while the other two - AMC and DLX - focusing on packaging solutions and building products, respectively. Stock performance along with recent announcements made by these three ASX-listed companies will also be discussed in this article.

About the company: As a building and construction materials manufacturer and supplier, Boral Limited has a client base in Australia, the United States and Asia. It operates in residential and non-residential construction, as well as engineering and infrastructure markets. The company was officially listed on the Australian Securities Exchange in February 2000.

New property agreement: Boral Limited and Mirvac Group (ASX: MGR) reached a property development management deed related to the former’s Scoresby site in Victoria, according to a BLD statement on 21 June 2019. The site, which is also known as Wantirna South, spreads over an area of 171 hectares and was a manufacturing plant for Boral Bricks. However, after the company divested its 40% stake in Boral CSR Bricks joint venture to CSR Limited (ASX: CSR) in November 2018, Boral retained the site’s ownership. As per the terms of the deal, Mirvac will be responsible for managing the site’s urban development over a multidecade period. The company will also manage a new housing community that is proposed along with substantial new parklands.

Meanwhile, from the deal, Boral would get earnings before interest, tax, depreciation and amortization (EBITDA) worth nearly $ 66 million till FY2026, in addition to $ 3 million in FY2019. The site, which is likely to be completed in 2035, would give additional significant earnings from FY2027. According to BLD estimates, Scoresby would deliver earnings of more than $ 300 million during its lifespan. However, these earning expectations are subject to rezoning, which includes the removal of the existing parks acquisition overlay by the state government of Victoria as well as market conditions over that period.

According to Boral CEO & Managing Director Mike Kane, this project, along with Mirvac-managed Donnybrook development announced by BLD a year ago, would result in earnings worth more than $ 500 million for the company over the next 20 years.

Boral is expecting to register nearly $30 million in EBITDA from property earnings during the financial year 2019. The EBITDA expectations are in line with the company’s earlier guidance.

It was reported that Boral Australia accounted for the group’s 53% revenue during the first half of FY2019. Below is the figure depicting Boral Australia’s performance during H1 FY2019.

For the second half of financial year 2019, Boral Australia unveiled that infrastructure projects that got delayed in the first half are back on track, while the segment’s focus shifted from residential to infrastructure. It was also reported that the second half is almost in line with the expectations including property on track to deliver around $ 30 million in FY2019.

Stock Performance: The shares of BLD have given a YTD return of 10.72%. By the end of the trading session on 5 July 2019, the price of the shares of the company was $ 5.500, up 2.421% as compared to its previous closing price. Boral Limited holds a market capitalisation of $ 6.3 billion and has approximately 1.17 billion outstanding shares.

About the company: With operations in nearly 250 locations in more than 40 countries, Amcor plc serves its clients in various sectors with its flexible and rigid packaging solutions, specialty cartons, closures and services. The company has its corporate headquarters in Zurich, Switzerland, while its head office is located in Melbourne, Australia.

ATO Class Ruling Received: The Australian Taxation Office (ATO) issued a Class Ruling CR 2019/42 on 26 June 2019, in line with the application submitted by Amcor plc. ATO lodged the application in relation to the scheme of arrangement between the company and its shareholders. The scheme was implemented on 11 June 2019.

Resignation of non-executive director: According to a company announcement made on 17 June 2019 with ASX, the company’s non-executive director, Mr Paul Brasher, will retire from the AMC board on 30 September 2019 after serving a term of more than 5 years. He also served as a member of the Audit Committee (including as Chairman) and the Executive Committee during his tenure at the company. Mr Paul made the decision to step down due to some health problems.

Stock Performance: The shares of AMC have given a YTD return of 24.94%. By the end of the trading session on 5 July 2019, the price of the shares of the company was $ 16.620, up 0.241% as compared to its previous closing price. Amcor plc holds a market capitalisation of $ 26.96 billion and has approximately 1.63 billion outstanding shares.

About the company: Founded in 1918, DuluxGroup Limited operates as a manufacturer of premium brand paints, coatings, adhesives, garden care and other building products. Moreover, the company is also involved in the marketing of its products. The company serves its client base in Australia, New Zealand and Papua New Guinea, as well as maintains niche positions in China and South East Asia. 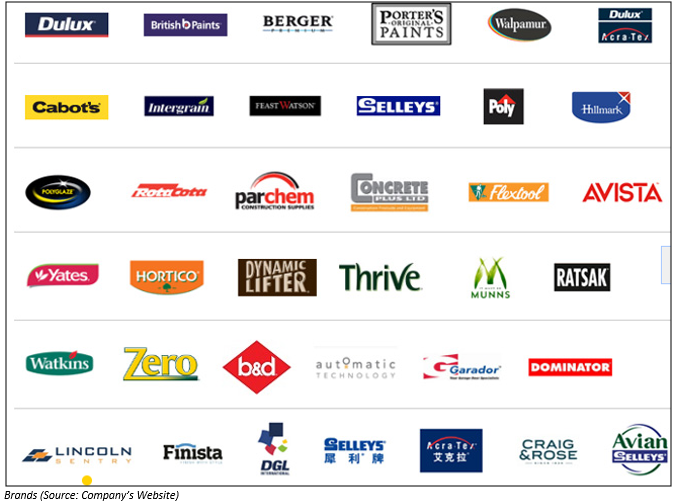 NZ OIO approves Nippon Paint's acquisition of DuluxGroup: In an ASX announcement made by the company on 28 June 2019, it unveiled that Nippon Paint Holdings Co., Ltd. has secured approval from the New Zealand Overseas Investment Office (OIO) for the acquisition of a 100% stake in DuluxGroup, by the way of a scheme of arrangement.

With the OIO approval, one of the conditions of the scheme has been met. However, there are certain other conditions under the scheme that are required to be satisfied before scheme can become effective. The other condition is the company’s shareholder approval for the proposed scheme during the scheme meeting, which is scheduled on 31 July 2019 at The Clarendon Auditorium, Melbourne Exhibition Centre in Victoria.

The company expects all the shareholders to cast their voting right by either being present at the meeting or by appointing a proxy, attorney or corporate representative who can vote on their behalf during the meeting. DuluxGroup directors had earlier advised the shareholders to support the scheme, in the event of absence of a better proposal. Subject to the same qualification, DLX directors also plan to cast their vote or cause to be voted all the company’s shares in which they hold a relevant interest in favour of the scheme.

Stock Performance: The shares of DLX have given a YTD return of 48.85%. By the end of the trading session on 5 July 2019, the price of the shares of the company was $ 9.330, down 0.107% as compared to its previous closing price. DuluxGroup Limited holds a market capitalisation of $ 3.64 billion and has approximately 389.25 million outstanding shares.