In the past few months, the Australian Stock Market has gone through highs and lows amid global trade tensions and variations in the Australian economy including declining property prices, disappointing inflation figures, interest rate cut anticipations, miraculous win of Coalition government, rising unemployment, proposed plan to scrap 7 per cent home loan buffer and modifications in the latest Statement on Monetary Policy (SoMP). 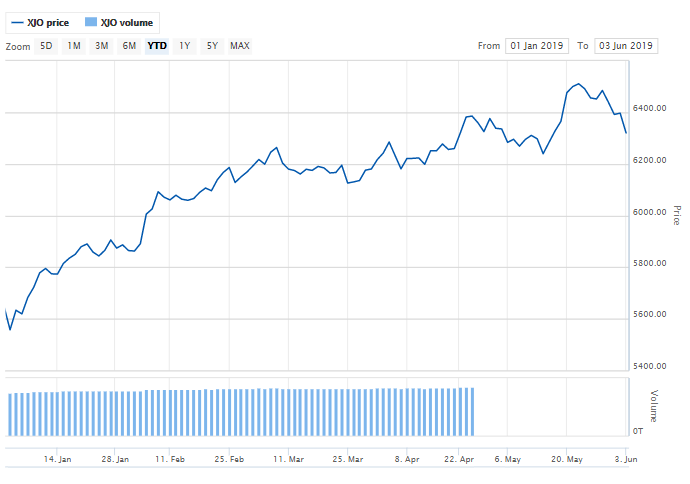 Let us discuss the factors that have impacted the Australian stock market in some detail:

Apart from the ongoing trade war between the US and China, the unfavourable results of the economic indicators have overlaid the downturn. In the wake of weak inflation figures and increasing unemployment rate, the Reserve Bank of Australia (RBA) Governor had signalled an interest rate cut in June.

Accordingly, RBA has decided to slash the official cash rate by 25 basis points in a meeting held today, taking it to a new record low of 1.25 per cent. The decision was taken to support employment growth and achieve more assured progress towards the inflation target.

The big four banks of Australia have been informed by the Treasurer of Australia, Mr Josh Frydenberg, that the government expects them to pass on in full any cash rate cut from the RBA. According to Mr Frydenberg, it is necessary for banks to fully pass on any benefits of reduced funding costs to the public, owing to the significant headwinds currently faced by the Australian economy domestically and internationally.

Investors are rushing towards safe-haven assets in the midst of a shaky global scenario, which has been creating fluctuations in the Australian stock market for the past several days. The trade worries emerged due to intensifying trade dispute between the United States and China, that started with the US President Donald Trumpâs threat to raise the tariffs on Chinese goods to 25 per cent. Despite a discussion with Chinese Vice-Premier, Mr Liu He in Washington, the US President remained firm on his decision to raise tariffs. Implementing the promised retaliation to Mr Trumpâs move, China announced retaliatory tariffs on US goods worth US$60 billion.

After announcing his tariff plan for Chinese goods, Mr Trump targeted Mexico by announcing imposition of 5 per cent tariff on all goods imported from Mexico beginning 10th June 2019, objecting cross-border movements from Mexico. Mexican officials have also warned of announcing targeted counter tariffs if the US progresses with the decision.

The conflict between the two largest economies of the world â the US and China â have raised concerns about the global growth prospects.

Do you know about Brexit?

Brexit is a term derived from âBritish exitâ. Britain decided to leave the European Union following a referendum in June 2016, and the expected Brexit deadline is now 31st October 2019. British Prime Minister Theresa May will step down from her position voluntarily on 7th June 2019 after facing severe pressure to resign. In order to avoid a chaotic "no-deal" exit, Britain has to confirm a withdrawal agreement with the European Union before leaving. Britain has already extended its negotiating period twice in the past and managed to avoid crashing out of the EU without a deal.

How Brexit Move Is Affecting Australia?

Britainâs exit from the European Union has raised concerns for the Australian companies having strong connections to UK capital markets and European funds management. The market analysts are worried about the growth prospects of such companies which are deriving a significant amount of earnings from the UK and Europe. Collectively, investors and businesses have more than 20 billion dollars sunk into the British economy as per market estimation, that makes them potentially vulnerable to the Brexit decision.

The Australian companies generating revenue from the UK and Europe have witnessed a fall in their stock prices in the past month. Since May 1, the share prices of companies like Link Administration Holdings Limited (ASX: LNK), Pendal Group Limited (ASX: PDL), Janus Henderson Group Plc (ASX: JHG) and Treasury Wine Estates Limited (ASX: TWE) have fallen.

The Link Group expected lower-than-expected earnings in 2H FY2019 due to the negative business conditions in Europe. Against the analyst expectations of $390 million EBITDA for the period ending June 2019, Link Group anticipated its EBITDA to remain between $350 - $360 million. The company informed that the uncertainty regarding the Brexit outcome in the UK is affecting the operating performance of its European operations.

Recent data released by a research firm showed a decline in the house prices of Australia by 0.4 per cent in the month of May 2019. Considering the continuous fall in property prices, the Australian Prudential Regulation Authority (APRA) had put forward a proposal to remove the 7 per cent floor in mortgage serviceability assessments, benefitting the new home loan buyers.

The Australian Bureau of Statistics (ABS) has today released data on the retail turnover figures for April 2019, the Balance of Payments and International Investment Position of Australia in the March Quarter 2019 and the government finance statistics for the March Quarter.

Let us have a look at each of them in brief detail:

The retail turnover of Australia declined 0.1 per cent in April 2019 in seasonally adjusted terms, while it rose 0.2 per cent in trend terms.

The table below shows the data on retail turnover of different industries and states & territories of Australia for April 2019 in trend terms:

The current account deficit of Australia dropped to $2.9 billion in the March quarter 2019 from $6.3 billion in December Quarter 2018 in seasonally adjusted terms. The balance on goods and services surplus improved to $13.6 billion from $8.8 billion in the previous quarter. 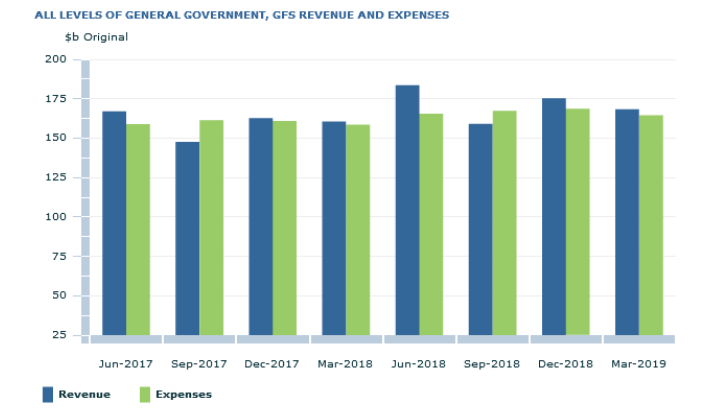 Economists were expecting the gross domestic product of 0.4 per cent for the March quarter and the annual growth of 1.8 per cent amid weak consumption due to softer incomes and the wealth effect of falling home prices.

However, many economists have upgraded their GDP forecasts post the release of strong net exports data and an increase in government expenditure figures. The economics team of NAB has also revised its GDP forecast for the first quarter from 0.4 per cent to 0.5 per cent.