Lithium stocks have lately been one of the most talked about in the market due to the turmoil caused in production and pricing, predominantly due to the rising global tensions on account of US-China trade war. Following the dropping lithium prices due to fall in demand from the electric vehicles market, producers in Australia are now cutting supplies of lithium. As per media reports, demand for lithium has fallen majorly due to alteration of subsidies by Beijing to electric vehicle markers and also due to a rise in global trade tensions. Moreover, the producers do not see any good news coming in through year-end, from the demand standpoint.

Recovery of lithium is entirely dependent on the abatement of the tensions arising due to the trade war. Looking at the current scenario, settlement may not be seen anytime soon, which, in turn, will keep impacting the demand for lithium until the market sentiment is perked up. This has adversely impacted the Australian lithium producers, resulting in lower sales at lower prices, compelling them to reduce production.

Orocobre Limited is engaged in the exploration and development of lithium at its flagship Olaroz Lithium Facility and the operation of Borax in Argentina.

September Quarter Highlights - During the quarter ended 30 September 2019, the company reported the highest ever production in the quarter. Record production came in despite a full plant shutdown for five days due to extended maintenance activity during August. Moreover, one of the two reactor units, was also offline for the month.

FY20 Guidance: Production for FY20 is expected to report a minimum growth of 5% on FY19. In addition, average sales price in the December quarter in expected to be between US$6,200 – US$6,500 per tonne.

Pilbara Minerals Limited is engaged in exploration and development activities at the Pilgangoora Lithium-Tantalum Project.

The company recently announced a Share Purchase Plan, wherein the company has determined to accept valid applications totalling approximately A$20 million. As per another recent announcement, the company updated on the completion of the A$55.0 million strategic investment, following the completion of A$35.0 million Tranche 2 placement by Contemporary Amperex Technology (Hong Kong) Limited (CATL). Total shares issued to CATL stood at approximately 183.33 million, issued at a price of A$0.30 per share.

Lithium Australia NL is engaged in exploration, project acquisition and development, primarily with respect to lithium.

Recently, the company updated that it increased its equity stake in Envirostream Australia Pty Ltd (EA) from 18.9% to 23.9%, significantly enhancing its exposure to the process of collecting and separating spent lithium-ion batteries. To increase the stake, the company made a further investment of $100,000 in EA.

As per another recent update, the company notified that its subsidiary, VSPC, produced high-quality cathode material using refined lithium phosphate from spent lithium-ion batteries. The material produced actually exceeded the VSPC standards for electrochemical performance, confirming it to be an ideal feed for VSPC technology.

Outlook: The company is the sole business engaged in the production of battery-grade lithium chemicals from all lithium silicates through cost-competitive processing techniques. In addition, the company is continuously eyeing other projects worldwide and is reviewing opportunities in Europe, Australia, Africa and the Americas.

Lepidico Limited engages in mineral exploration and development, and development of propriety technologies namely, L-Max®, S-Max® and LOH-Max™. The company recently released an announcement stating that the 2019 Annual General Meeting will be held on 21 November 2019.

The company also notified the results from the recent Pilot Plant campaign and reported on the highest specification lithium carbonate of 99.95% purity, produced to date by L-Max®. The purity level exceeded the normal battery grade reference purity of 99.5% for many existing producers. 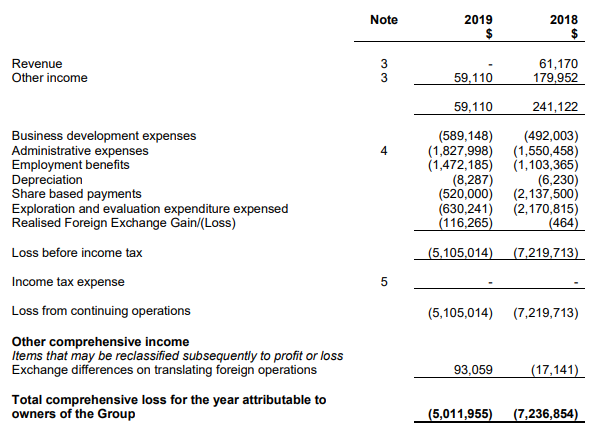 Stock Performance: The stock of the company generated negative returns of 22% and 51.86% over a period of 3 months and 6 months, respectively and has a market capitalisation of $83.57 million. The stock closed at a market price of $0.019, flat with respect to the previous close, on 24 October 2019.

Altura Mining Limited, is a small cap company with the market capitalisation of $134.88 million as on 24 October 2019. The company is involved in construction of the mine and processing plant at its 100% owned Pilgangoora Lithium Project. The company recently updated that the 2019 annual general meeting will be held on 22 November 2019.

Capital Raising: As per another recent update, the company provided details on a capital raising of approximately $21.5 million through a non-renounceable entitlement offer of two fully paid ordinary shares for every thirteen existing shares. Another notification stated that no offer will be made to the ineligible shareholders under the offer. Proceeds from the issue will be utilised for exploration on the highly prospective tenements in the Pilbara, incremental capital works on the Altura lithium process plant at Pilgangoora, and funding of working capital following the ramp up to full production of 220,000 wet metric tonnes of spodumene concentrate.

Stock Performance: The company’s stock generated negative returns of 21.62% and 49.57% over a period of 1 month and 3 months, respectively. The stock closed at a market price of $0.058 on October 24, 2019, reporting no change on the previous day’s closing price.