Lithium Stocks such as Galaxy Resources and Orocobre and many more are gaining traction in the market as the energy-hungry electric vehicle segment looks charged up to capture a substantial tranche of the global vehicle market. The recent stance of the major global economies to reach Zero-emission is prompting the electric vehicle sector to outpace the traditional ICE (or Internal Combustion Engine) vehicles.

Status Quo of the Lithium Market

The Australian lithium miners have started reducing the production over demand fall in China amid weaker lithium chemicals pricing.

However, the recent leap of Chile and Chilean lithium mammoth- SQM to regain the lost market shares to the Australia lithium miners still possess headwinds for the beleaguered lithium industry as it could keep the production well above the global demand.

Many Australian lithium miners have already reported losses over the falling prices of lithium-based chemicals and lithium-rich spodumene.

Galaxy reported the revenue from the ordinary operations of US$27.961 million for the half-year ended 2019, down by 68 per cent as compared to the previous corresponding period revenue of US$88.440 million, despite strong operational performance amid lower sales and weaker spodumene pricing.

The production and sales summary from the prospect is as below: 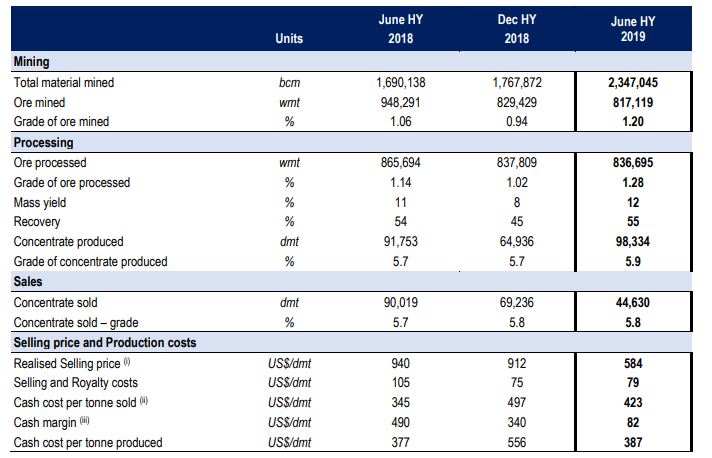 The Sal de Vida lithium project of the company witnessed development works throughout HY2019, with a major focus on process optimisation works and seeking to identify potential opportunities to de-risk project developments.

Likewise, the company was engaged in the development of its James Bay lithium pegmatite project during the June HY2019.

Despite decent progress in production capacity, lower sales volume and weaker spodumene prices in the international market left the company with a gross loss of US$19.554 million as compared to a net profit of US$23.239 million during the June HY2018. The inventory write-down of US$13.589 million brought an additional burden on the gross profits during June HY2019.

However, despite a fall in revenue and the gross profit, Galaxy remains committed to the lithium industry, and Mr Simon Hay mentioned that the operational outcomes during the first half remain pleasing in the face of difficult market conditions.

Galaxy seems to be committed to the lithium industry and walking shoulder-to-shoulder with the international giant. SQM recently recognised losses, and despite lower prices, the behemoth plans to inch up the production to recapture the lost market shares.

Galaxy’s Exposure to the Bald Hill

The lower spodumene prices have forced Alita Resources (ASX: A40) to halt production at its Bald Hill prospect, and the company entered into a discussion with its key investor- Tribeca Investment Pty Ltd. Galaxy recently reached an agreement with a consortium of lenders to acquire the senior loan facility provided to Alita Resources.

Galaxy has been assigned and novated the rights, title and interest of the Facility with a principal value of US$28.8 million. The commercial terms of the Facility remain as below:

Galaxy appointed KPMG as the receivers and managers of Alita Resources Limited, and the company would now work with the Receivers and the voluntary administrators to determine the future actions for beleaguered Alita.

Orocobre Limited- an ASX-listed lithium chemical developer and exporter reported a statutory net profit after tax (or NPAT) of US$54.58 million in FY2019 (ended 30 June 2019).

Despite lower prices for the lithium chemicals in the international market, ORE managed to bag profits as Chinese downstream processors witnessed various challenges.

The slower growth in China and the impact of the trade spat played-off for the Australian lithium chemical as it forced the domestic supplier in China to de-stock in the first quarter of FY2019. The rush to de-stock the inventories amid surmounting tensions from the trade war offered competitive pricing and encouraged sales from other suppliers of lithium chemicals.

However, the weak lithium price in the international market led the company to realise a selling price of US$10,322 a tonne of lithium carbonate in FY2019, down by almost 18 per cent as compared to the previous year realised the price of US$12,578 a tonne.

On 2 September 2019, the company announced to the market on the appointment of new Chief Operating Officer, Mr Hersen Porta. He would be responsible for overseeing the operations of Olaroz Lithium facility and Borax Argentina S.A. Further, Mr. Porta has over 28 years of experience at Dow Chemicals. Since 2015 he has held the position of General Manager and President of Cabot Corporation in Argentina.