Gold has been one of the few things that have glittered in these times of economic turmoil. Considered a hedge against market fluctuations,  the yellow metal has performed well, and the spot prices even hit a 7-year high last month.

The Australian gold miners have continued their operations during the current period and have aided the country stay afloat in these unprecedented times. The yellow metal has multiple applications including treatment of cancer, offering a protective layer around pacemakers for allergic patients, and being a critical component in diagnostic test kits, among others.

While the gold mining companies have been actively carrying out their respective operations, one big player, Newcrest Mining Limited, faced a production challenge in one its mines. Let us look at the ASX-listed gold player and its recent activities, including an update on the above mentioned operational challenge.

Metals & mining player Newcrest Mining Limited (ASX:NCM) is a gold mining company which owns and operates a portfolio of mines with a long life at low costs. NCM has a robust pipeline of exploration projects. The assets of the Company include: 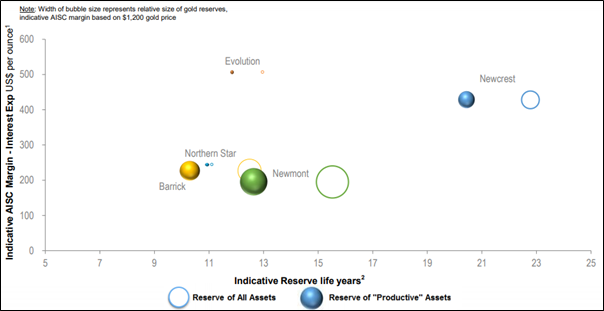 On 20 May 2020, NCM notified the market that it had secured a sufficient level of water for Cadia gold and copper mine. The Company mentioned that this water would be adequate for production up to a minimum of two years.

Cadia took specific initiatives and implemented some of the measures to combat the scarcity of water, such as gaining substantial water-saving efficiency and optimisation of water sources (onsite bores and others). Moreover, the mine benefitted from the recent rainfall in its region. The improved levels of water available in the onsite facilities are due to buying of water licences on the water trading market.

The scarcity of water was due to the severe drought in the state of New South Wales in the last few years. The situation of rainfall in the previous two years was at a low level of 1-in-100 years. With this low level of rainfall, previous internal modelling indicated that Cadia’s production for CY 2021 might have been impacted.

About Cadia Mine and its performance in Q3 FY 2020:

At Cadia, the expected Life of Mine for copper and gold recovery rates of nearly 85 per cent and 80 per cent, respectively. The estimated capital for Stage 2 Feasibility Study was $180 million, and the study is expected to be completed by the end of CY 2020.

The production of gold in the three-months ended 31 March 2020 was 6 per cent low as compared to the prior quarter. This reduction was due to lower output at Cadia, among other mines. 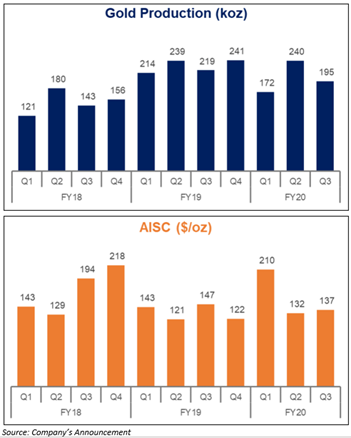 To buy the financing facilities of Fruta del Norte mine, Newcrest planned for a capital raise, including placement of $1 billion and share purchase plan of $100 million. The proceeds would also be used to finance future growth options including the declines construction at Red Chris and Havieron.

The Company announced on 1 May 2020 the completion of the institutional placement of $1 billion (fully underwritten). The placement includes issuance of 39,062,500 new fully paid ordinary shares, nearly 5.1 per cent of NCM’s existing issued capital. The placement price of $25.6 per new share, represents the following:

Subsequently, on 7 May 2020, NCM announced an SPP to raise a maximum of $1 million (not underwritten). SPP allows its eligible shareholders to apply for a maximum of $30,000 new ordinary shares (fully-paid). These shareholders will not incur the cost of commissions, brokerage, or any other transaction expenses.

The issue price of the SPP shares was the lower value of the following:

As per the presentation released on 12 May 2020, Newcrest provided its FY 2020 guidance as follows:

Stock Performance: The stock of NCM closed the day’s trading session at $31.620 per share on 21 May 2020, a decline of 0.94 per cent compared to its previous closing price. The market capitalisation of Newcrest stood at $25.8 billion, with ~808.26 million outstanding shares. During the last one month and YTD, the stock of NCM has generated returns of 16.07 per cent and 7.4 per cent, respectively.