Lithium prices are trending lower with the benchmark price of Lithium Carbonate (99.5 per cent) spot trading around CNY 74500.00, which is significantly down from the level of CNY 175000.00 (high in December 2017), which in turn, marks a decline of more than 57 per cent.

The main factor which contributed towards the lithium plunge is the oversupplied market; however, despite an oversupply, lithium prices are expected to surge by the industry players over the battery boom. Over the predicted growth, many lithium players are still extensively engaged in the production of primary lithium and lithium-based chemicals for the battery industry.

LIT, a lithium miner and explorer, is engaged in the Pilgangoora, Yilgarn Craton, Electra, and many other projects. The company is listed on the Australian Securities Exchange.

In an announcement made public by the company on 25th June 2019, LIT mentioned that the company would commence resource drilling at the Youanmi prospect in Western Australia, where it recently discovered lithium pegmatite.

As per the company, the extensive lithium mineralisation at the prospect is pegmatite-hosted, and lepidolite dominants the lithium mineralisation, which LIT processes through its proprietary SiLeachÂ® process to recover lithium and other by-products. The proprietary process could allow the company to compete with other players over the price. Moreover, it is among the most advanced hydrometallurgical processes of its type.

LIT, which has dispatched the field crew, intends to commence drilling activities before the end of the current month. The drilling programme would undertake up to 3,000 metres in order to evaluate the resource potential and pegmatites geometry. The company further plans to take the samples from the upcoming drilling program for mineralisation characterisation and for metallurgical testing.

The company believes the oxide resource sections to be amenable for direct leaching for vanadium sulphate production. The material could be directly used to develop vanadium flow batteries.

LIT would also use the samples from vanadium drilling programme for ore characterisation and metallurgical testing.

The drill targets of the company for the prospect are shown in the picture below: 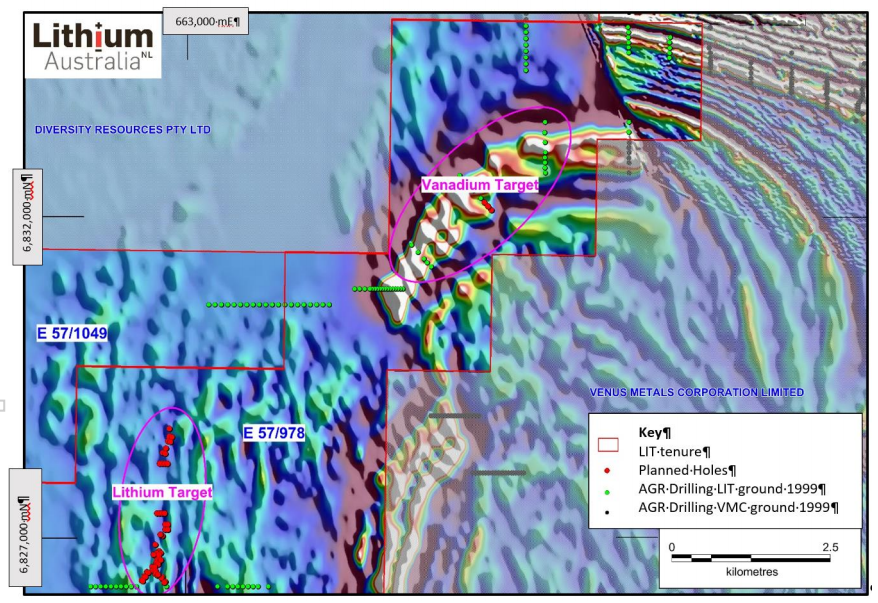 Despite achievements in terms of mineralisation identification and many proprietary techniques, the share prices of the company are moving in a continuous downtrend. The fall in lithium price and slower growth in lithium chemical could be a possible reason for the fall.

The project-wide mineral resource estimate for the Piedmont Lithium Project is as:

The depth break-up of the Mineral Resources is as:

The distribution of the core property and the central property across the Piedmont Lithium Project is as: 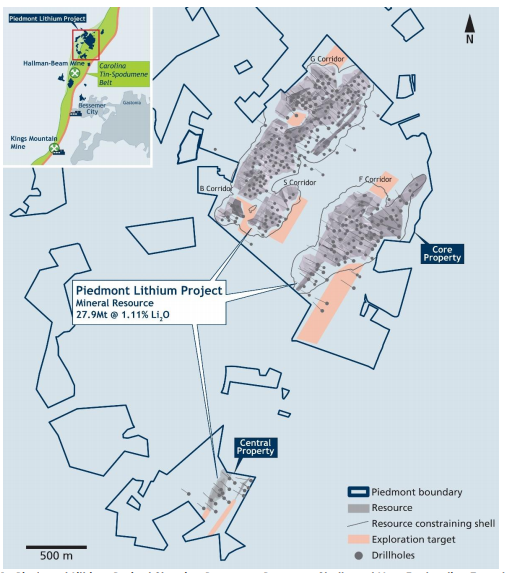 Drilling Status: The company drilled a total of 326 diamond core holes to date at the Core property, which accounted for 51,047m of drilling. The company undertook the drilling activity in four phases and combined the results of 307 drilled holes with historical 19 drill holes to reach the estimated levels of mineral resources.

The previous plunge in the share price reduced the return metrics, and the shares of the company delivered a negative return of 10.53 per cent in one year; however, the recent uprise improved the YTD returns, which stands at 84.78 per cent.