Australia is well-known in the world for its reservoir of resources and minerals. On Australian Securities Exchange, the Energy sector is represented by S&P/ASX 200 Energy index, which is closed in green at 10,904.9, up 10 points or 0.09% (On 20th September 2019). Letâs discuss with examples of some companies and look at how they are performing in the industry:

In another update, the company through a release dated 17th September 2019 updated the market with further information on Supply Deal to Vietnam. The company stated that the project is led by Delta Offshore Energy Pte Ltd in fellowship with Magnolia LNG LLC, a wholly owned subsidiary of LNG. The company further added that the announcement of 16th September 2019 has a reference to a term sheet, which is in the form of a memorandum of understanding between Magnolia LNG and Delta Offshore Energy Pte Ltd. The Term Sheet details material terms of the proposed liquefied natural gas sale and purchase agreement having a target commercial start date of no later than 1st January 2024. The following snapshot provides a broad idea of financial performance for the year ended 30th June 2019:

As per the ASX release dated 16th September 2019, the securities of the company have been under a trading halt until the earlier of the commencement of normal trading operations on 18 September 2019 or when an announcement by the company is released to the market.

When it comes to the price performance of the stock, Liquefied Natural Gas Limited was last traded at a price of A$0.260 per share with a rise of 4% on 20th September 2019. It witnessed a decline of 47.92% in the time frame of six months. On Year to date basis, the stock produced a negative return of 51.46%. 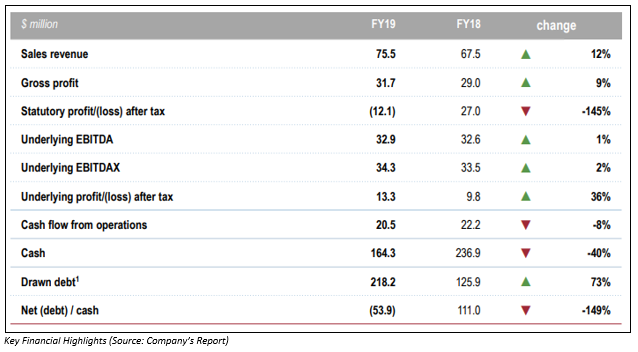 New Hope Corporation Limited (ASX: NHC) is into exploration of coal as development of Queensland project. It has a market capitalisation of A$2.01 billion as on 20th September 2019.

A look at financial performance:

The company recently announced its full year 2019 financial results, wherein it discussed about its operational and financial performance for the period: 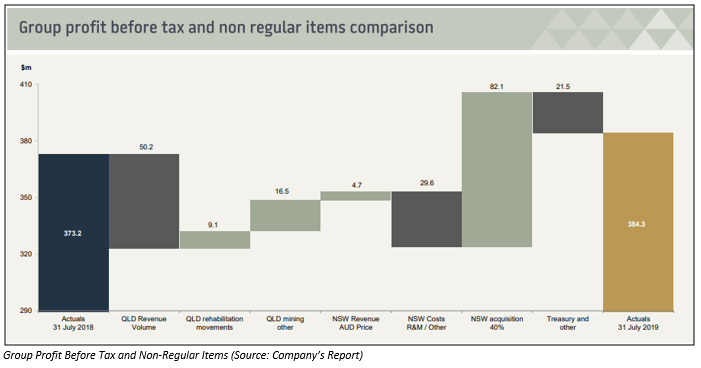 When it comes to the price performance of the stock, New Hope Corporation Limited was last traded at a price of A$2.350 per share with a decline of 2.893% on 20th September 2019. It witnessed a decline of 37.79% in the time frame of six months. On year to date basis, the stock generated negative return of 26.44%.

Whitehaven Coal Limited (ASX: WHC) operates of coal mines in New South Wales (NSW) It also develops coal mines in the same region. The company recently announced that Prudential Plc and its subsidiary companies have ceased to become a substantial holder in the company on 12th September 2019. In another update, the company announced that it will be conducting its 2019 Annual General Meeting on 17th October 2019.

When it comes to the price performance of the stock, Whitehaven Coal Limited was last traded at a price of A$3.260 per share with a decline of 1.807% on 20th September 2019. It witnessed a decline of 15.75% in the time frame of six months. On Year to date basis, the stock generated negative return of 17.03%.