In our report from the 100 years of the Australian Share Market and based on the extensive research report laid down by the Reserve Bank of Australia, major banks account for a large share of the Aussie economy’s output and employment. Banks in Australia have undergone mergers and grown over time. Even though the banking stocks underperformed for a few decades post the Great Depression (from 1929 to 1939), it is an interesting find that the financial corporations, and banks, in particular have accounted for over half of the Australian market in terms of market capitalisation. What’s interesting is the fact that this statement has remained intact and true for a century.

Banking Sector and its Impact:

The section of a country’s economy, which focusses on the financial assets to contribute towards creation of wealth, while undertaking regulatory activities in sync with the government, is the banking sector.

In simple terminology, banking is described as a process and full-fledged business activity, wherein money owned by other individuals and entities is not only accepted and protected, but eventually lent for the purpose of earning a profit. With evolving times, the banking business has expanded with a hoard of products and services on the offer. Cards, lockers, ATM services and virtual banking have been a part of the evolution of banking.

Banking is amongst the most vital factors driving an economy and contributing towards its growth, as it encourages the flow of money in the direction of productive use and investments. Banking aids businesses, entrepreneurs and individuals to facilitate their financial transactions and forms an everyday part of their lives, without which the economy would cease to function effectively and efficiently. The impact of banking deepens as it is one of the catalysts that drives international trade relations between the economies.

Around the world, the popular players in the banking space include of; Wells Fargo, JP Morgan Chase and HSBC Holdings.

Based on a survey undertaken by the RBA, banks’ overall income from fees was tweaked a bit in 2018. A number of banks removed the ATM withdrawal fees, reducing the total fees charged to households, which accounts for approximately one-third of the banks’ fee income. The remainder, which is the fee income from small businesses continued to rise, depicting a significant increase in the transactions done via credit card and debit card.

Elaborating the tweak, reflecting a submissive growth in lending assets and deposits, the ratios of fees to assets and deposits remained flat in 2018. After depicting a growth profile in the recent years, the bank fees charged to households decreased by 7 per cent in 2018, driven by the significant decrease in fee income from household deposits and the decline of the housing loans. 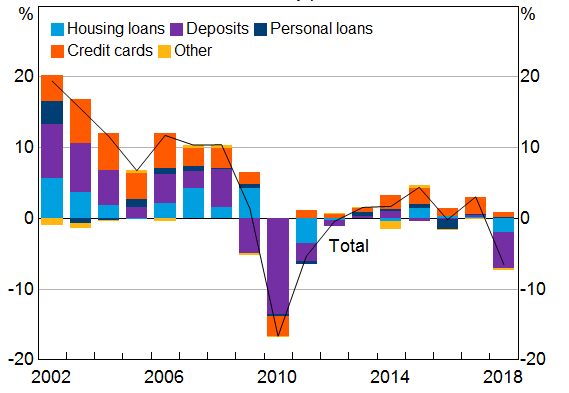 The Fee income from credit cards grew at a comparatively slower pace. Coming to the Fee income from deposit accounts, these slumped by 20 per cent, driven by the abolishment of ATM withdrawal fees. It should be noted here that of late, consumers in Australia have been inclined towards the usage of electronic payment modes and payment cards. Income from exception fees on transaction deposit also deteriorated.

From the small business perspective, the Total fee income from businesses increased by 3 per cent in 2018, with a growth in income from merchant service fees on card transactions. The fees charged on the business loans also witnessed a fair increment though the fees from deposit services and bank bills went down. Merchant service fee income continued to grow at a sturdy pace. 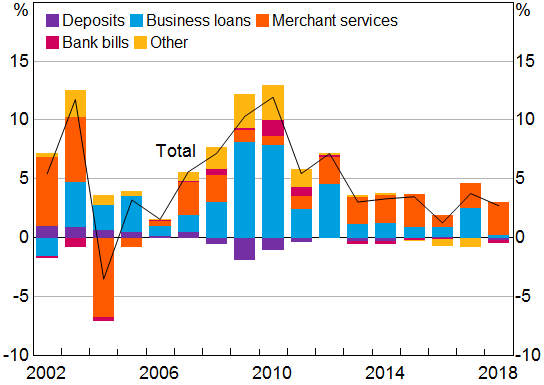 In the backdrop of this context, let us look at a rousing update and the performance of the top four banking stocks of the Aussie land, on the Australian Securities Exchange:

Regarded amongst one of the “Big Three credit rating agencies” along with the Standard & Poor and Moody’s, Fitch Ratings Inc. is a renowned credit rating agency, headquartered in New York. On 17 July 2019, the agency created a buzz in the Australian banking space, when it revised its ratings of two major Aussie banks, who are looked upon as peers in the country- Westpac and Australia and New Zealand Banking Group. The revised rating moved the standing of these two banks from “stable” to “negative” with ratings at “AA- “.

This depicts Fitch’s increased focus on compliance measures and taking charge of operational concerns. It should be noted here that last year, other two major banks- NAB and CBA had been placed on the negative rating side, on the same account of a negative outlook.

This was announced post APRA’s order to three major Aussie banks to each set aside a further A$500 million as a requisite capital, until the risk management was made robust and the reimbursement took place for the wrongly charged fees to customers.

It can be stated that moves like this showcase a strictness in the economy towards any complexity, lack of accountability and bureaucracy.

On the trading side, below is the performance of these big banks on the ASX:

The below graph depicts the 6-month returns that CBA, WBC, NAB and ANZ have generated, as on 18 July 2019. Surprisingly and interestingly, it can be noticed that all these major players have shown a similar trend while generating their respective returns and have risen and nose-dived almost simultaneously.