The regulatory technology firm assists the business and the customers to prevent money laundering, fraud, and financial crime via commercial Know Your Customer solutions. A crucial feature of the business is that on every search it connects you to the registry to ensure the quality and the accuracy of the details provided.

The Company, post the release of its quarterly report, has signed two substantial agreements. The most recent being the deal with Commerzbank and before that, an extension of the partnership with Citigroup. (Details of both the deals are covered later in the article).

The progress made by the Company reflects its focus on the commercial agreements from existing enterprise clients as well as prospects and strategic partners, which KYK highlighted in its Q3FY2020 outlook.

Let us look at the two major deals.

On 15 May 2020, Kyckr Limited announced that it had entered into a new annual agreement with Commerzbank AG for Kyckr’s Business Portal with a service value of at least AU$100,000 over the first 12 months.

Commerzbank AG is the second largest bank in Germany and has more than 49,000 employees that operate in approximately 50 nations. The bank had been using Kyckr’s platform earlier as well on a pay-as-you-go basis. With this new deal, the Company has extended its relationship with Commerzbank.

Now the Company’s technology would be used by Commerzbank to offer automatic access to primary source data and papers during the crucial phase of customer verification, mainly for Commerzbank’s operations in the United Kingdom.

Also, Kyckr Limited reported that in April 2020, it attained a record monthly revenue of AU$260,000. This value had increased by 39% compared to the previous year.

On 14 April 2020, Kyckr Limited announced an extension of its services with Citigroup Commercial Bank. The bank is a division of the US-based multinational Company Citigroup and is a long-term customer of Kyckr.

As part of the extended agreement, the bank will adopt the client verification platform of the RegTech firm. Citigroup Commercial Bank would utilise the API solution of KYK to gain admission to real-time primary data and records at the crucial stage of client verification at the time of onboarding of a new business client.

The value of the services would be up to US$300,000 for a period of 12 months to 18 months, and the technology would be used in 15 leading countries where the bank is operational. Kyckr confirmed that data traffic has started, and the Company is optimistic about growing its link with Citigroup. 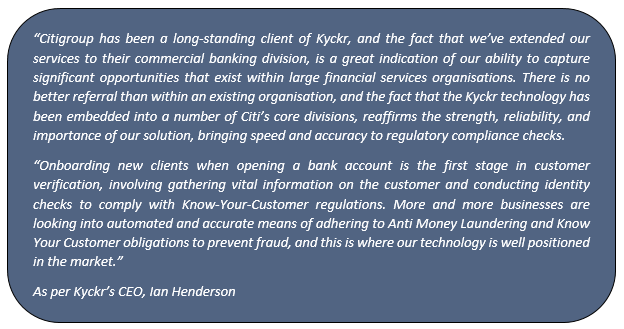 A Glance at the Operational Highlights of the Company During Q3FY2020:

In Q3 FY2020 (period ended 31 March 2020), Kyckr built robust sales channel capabilities in the United Kingdom, and it confirmed that it continues to engage with the existing as well as the potential new clients and strategic partners.

The continued engagement of the Company with the existing customers resulted in successful business development efforts, which includes the recent agreements with Citi Commercial Bank and Commerzbank.

The Company, in its announcement, highlighted that the extension of the services strengthens its focus on Enterprise growth. Other than this, there are numerous pilots which are under process with major banks and strategic partners.

The Company also foresees progress with its strategic partner pipeline after the enactment of the EU’s Fifth Anti-Money Laundering Directive during January 2020. On that front, the Company is optimistic that it is well placed to capitalise on the related demand for KYC technology solutions and the rise in demand for real-time primary source data & Perpetual KYC solutions.

During the quarter, the Company experienced minimal disruption to its day to day operations.

On 22 May 2020, KYK shares were on a trading halt pending an announcement related to the proposed capital raising.

KYK shares have provided a YTD return of -13.04%. However, in the past three months, KYK stock has delivered an impressive return of 26.58%. The Company has a market cap of AU$23.47 million and 234.71 million outstanding shares.