Origin Energy Limited (ASX: ORG) is an ASX-listed energy retailer with a focus on accelerating towards clean energy, and the company plans to have over 25 per cent renewable storage capacity by 2020. While energy retailing is the primary business of the company, the business portfolio is just not limited to it, and ORG owns and operates APLNG prospect for the customer is fleet transportation.

Origin operates a diverse business spanning generation, upstream gas, and retail operations, and the business model of the company provides a natural hedge against oil prices fluctuations in the international market.

Fears of Blackout Summers in Australia

The upcoming summers are anticipated by many subject matter experts to witness a large number of blackout due to various problems, which the National Electricity Market (or NEM) could face, over certain issues in the domestic market.

Australia has witnessed a large number of natural calamity with excessive bushfires, lightning, storms, and high winds, which could significantly reduce the output of all types of generation, and impact the transfer capacity of the transmission lines, which could result in the loss of electricity supply in the domestic market.

The aforementioned event could increase the risk of intense bushfires in the South-east of Australia with an elevated risk of warmer and drier end of the year. The BoM has informed the energy operator to expect a below-average rainfall (particularly for eastern Queensland). The Bureau had also warned the energy operator about the changes of higher bushfires and exceeding median maximum temperature. 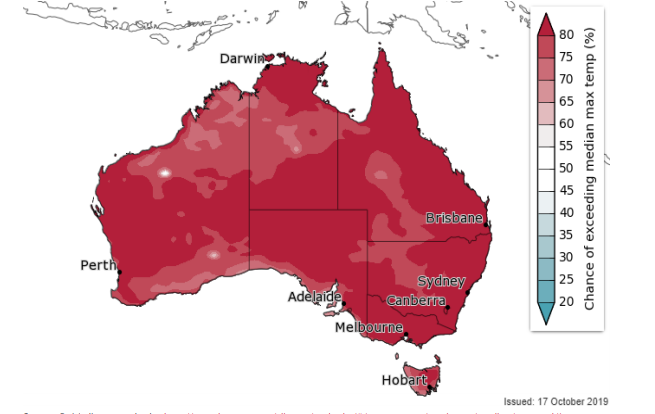 The 10 per cent probability of exceedance (or POE), which is a statistical probability of a forecast being met or exceeded, maximum demand forecast for this summer is as below:

While higher rooftop installation is anticipated to reduce the higher grid demand, Origin could take advantage of such a situation via its solar packages and plans. However, the grid demand in the peak summers cannot be overlooked.

The Australian Energy Market Operator (or AEMO) is improving the capability to assess key uncertainties that could impact the supply in the National Electricity Market, to ensure a steady supply during the peak summers; and,

Under the National Electricity Rules, the Reliability and Emergency Reserve Trader (or RERT) is a function through which the energy operator could enter into reserve contracts with resources not available to the market to ensure higher reliability of supply.

The 2019 Electricity Statement of Opportunities (ESOO) projected reserve shortfalls over the reliability standard in Victoria this summer, and to manage that the energy operator released tenders for long notice RERT in August 2019.

The Energy Market Operator is also securing short to medium notice panel agreements for RERT in Victoria and other jurisdictions.

The energy market operator incurred a total cost of $34.5 million, and the operator used the previous estimates to assess, that it would incur a cost of $44 million for the period of 1 November 2019 to 31 March 2020.

The Mortlake power station of the company is out of action since July 2019 amid an electrical fault, and in the status quo, the company mentioned that the restarting of the plant in Queensland would be delayed by 10 days and is expected to come online on 30 December 2019.

While the generator of the company would be delayed by 10 days, the current coal-based power station of another energy retailer- AGL Energy Limited (ASX: AGL) in Queensland (Loy Yang A) is also out of the action at the moment with repairs been conducted across the Unit 2 of the prospect.

The Appeal of Energy Users Association of Australia

The association of energy users urged the customers, that while the market operators and producers are working in collaboration to fill the supply, nobody could guarantee that the lights will never go out. The association also mentioned that the paramount efforts would be to achieve no power cut would bring additional cost to the consumers.

In a nutshell, the extreme weather conditions is anticipated to disturb the grid supply in the domestic market, which is now prompting the AEMO to secure additional reserves, and apart from that, the increased shared of solar rooftops, which are expected to reduce the daytime consumption significantly could be beneficial for the company.