The coronavirus pandemic has resulted in the sharpest fall in jobs in the first week of April after businesses and factories shut down and increasing social distancing measures introduced in the country in late March. The restrictions included the closing down of clubs, gyms, pubs, restaurants and businesses, travel bans with stay-at-home orders from the government but relaxation have been provided on going out to fulfil specific essential needs of the people.

The figures from ABS statistics on jobs and wages through its statistical product Weekly Payroll Jobs and Wages in Australia reflects the destructive impact the pandemic has had on employment. The data is based on all businesses who report through Single Touch Payroll data from the Australian Taxation Office (ATO) and gives information on the economic impact of COVID-19.

The data showed that between the period of 14 March-14 April (3 weeks after the country recorded its 100th case), jobs decreased by 6% while total wages paid reduced by 6.7% making clear the impact of the coronavirus pandemic.

The steepest fall in jobs was in the week ending 28 March during which employee jobs decreased by 5.5% while total wages paid reduced by 5.1% compared to the previous week.

The Accommodation and Food Services sector has been the worst hit with several jobs down by a quarter and wages down by 30% between 14 March-14 April. The least affected industries were education and training, utilities, healthcare and Transport & warehousing with job losses of 0.1%, 1.1%,2.5% and 3% respectively during the same period. The younger cohort (under 20) bore the major brunt of the employment downturn while workers in the age-group of 50 were least affected.

Below is a chart depicting the largest job losses witnessed by different areas. 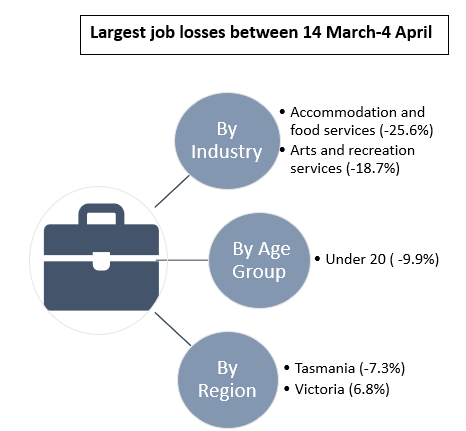 During the period between 14 March and 4 April, the number of females who held a job reduced by 5.7% while there was a 5.1% reduction for those worked by males.

The data is in sharp contrast than the official unemployment rate in the country, which reached 5.2% in March. As per various economists, the data did not reflect the real economic fallout caused by coronavirus pandemic as the data revealed only the first 2 weeks of March before the hospitality industry was shut down.

Here is a flow diagram for the number of hours worked for people aged 18 and above. About 12% of the Australians of the age of 18 and above with a job were at work for more hours than usual due to COVID-19 while about 24% were at work for fewer hours in the first week of April. 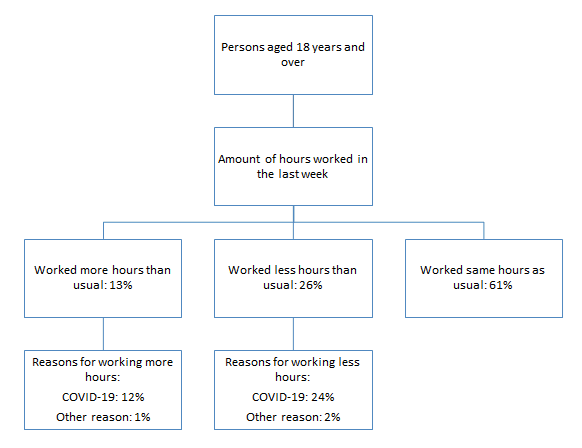 Australians are sticking to social distancing

ABS survey has shown that the majority of Australians are taking COVID-19 seriously. They are adhering to social distancing and other measures needed to prevent the disease spread. Here are some statistics form the “COVID-19 impact on Australian Households” survey conducted for the period of 31 March-6 April showing that the Australians have changed behaviour and are maintaining physical distance to prevent the spread of the contagious disease.

The survey also showed that women were more apprehensive about their health than men. About 73% of the women reported that they were concerned/very concerned about their health compared to 62% of men. However, concerns were highest amongst people aged more than 65 years at 71% marginally higher than 67% of the people aged 18-64 years.

Businesses worldwide, including Australia have faced a widespread shutdown with a drop in the activity across a range of industries due to social distancing measures being taken by the government to contain the coronavirus spread. The Australian government has taken stimulus measures worth $320 billion, of which $130 billion is a JobKeeper payment program to protect the jobs of Australians and support the economy financially.

Bill Evans, Chief Economist of Westpac, has predicted an unemployment rate of 9% for the June quarter with a subsequent declining to 7% by end December.

The measures taken by the government to protect the country from the economic fallout of the coronavirus outbreak have received a mixed response by policy experts and economists. If the unemployment rate keeps rising, the impact would be much more difficult to reduce.

Overall, there is a possibility of businesses to fail and consumers to remain vigilant on spending for a certain period contingent on the scenario and measures adopted by the country for COVID-19 spread.