Is there a bubble around BNPL Space – A look at APT, SZL, Z1P, OPY

The economic fallout as a result of COVID-19 pandemic has increased the number of companies and consumers trying unconventional payment options- particularly the millennials, for quicker and easier access to credit. Amid rising job losses, cuts in consumer’s spending ability and company revenues, many firms are working towards making transactions inexpensive and easier for which BNPL products are practical solutions.

The option of BNPL turns single large purchases into many smaller transactions, often without interests if paid off quickly. Such payments give a sense of stability to consumers and retailers in challenging times of COVID-19. Recently, BNPL stocks have gained momentum with a significant increase in customer base and sales.

The BNPL sector has been showing massive gains of late, which does pop up questions like if the real value has doubled or increased even more since March for the firms in the related space.

The BNPL companies have high market capitalisation, but are not making any profits now, which is similar to the tech bubble of the 2000s. Also, the small-cap companies are particularly prone to such bubbles. A bubble is an economic phase characterised by swift acceleration of asset prices followed by a contraction.

Let’s have a look at some BNPL stocks that have soared since March this year amid COVID-19 crisis.

Afterpay share price has jumped from a low of $8.9 on 23 March to $68.16 on 2 July, soaring by more than 665% as the payments firm has gained a lot from the increasing shift towards digital payments method.

On 23 June, Clearpay which is part of global instalments payments group Afterpay announced that it has more than 1 million active consumers in the UK who are using their service. Clearpay became one of the fastest-growing e-commerce payment companies in the European market after being launched in the UK just a year ago.

ALSO READ: Afterpay Shares from $56 to where: Dichotomy for Pay later or Regret Later

As per the Company’s trading update dated 21 May, Afterpay has more than 5 million active consumers in the US who are using the service at APT merchant partners, ~9 million US customers who joined the platform (included over 1 million new US customers) utilising the platform between 1 March to 15 May amid COVID-19.

As reported during May, above 15,000 brands, as well as retailers had been recommending or were in the process of offering Afterpay to their customers. APT helped merchants in processing $2.4 billion year to date through Q3 FY20, reflecting a rise of 354% over the same period in FY19.

On 1 May, Afterpay welcomed Tencent Holdings, an internet value-added services provider to users, as a substantial shareholder with 5% voting power in APT.

Sezzle Inc, the US-based alternative payment provider, is well placed in the e-commerce space, with a healthy capital position and strong balance sheet. The underlying merchant sales (UMS) for SEZ surged 321% to a record US$ 119.4 million in Q120 ended 31 March. Some other highlights include: 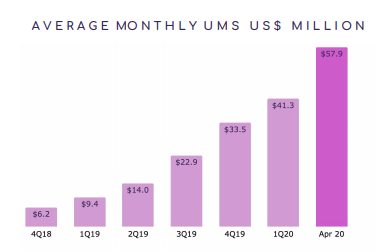 The BNPL player ZIP Co Limited performed strongly in May 2020 as it reported strong transaction volumes and outstanding repayment performance amid COVID-19 shutdowns.

Some of the highlights as per the trading update dated 12 June for the month ending 31 May 2020 are: 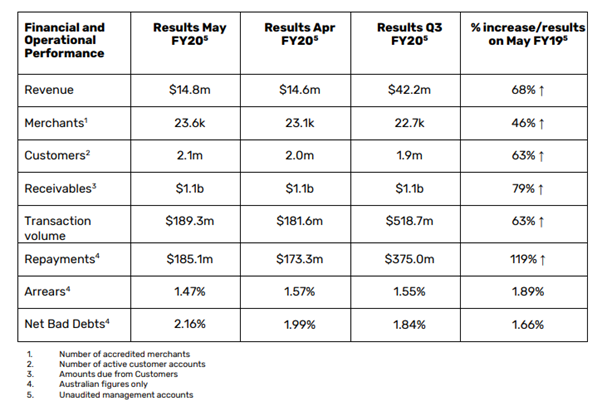 The Group has a strong balance sheet and growth funding position implying no need for raising capital. Openpay has refreshed its brand to stand out amongst the competition and build a uniquely identifiable brand with initial program roll out in the UK, Australia, and New Zealand to follow.

Hence, all these BNPL firms have extreme valuations, with huge market cap that is increasing, as people are paying the premium value for these businesses, but the entities are not making any profits.