Is The World Steering Up Towards The Clean Meat Revolution?

When it comes to human survival, food is one of the basic necessities. Variety has been the spice of the human race since time immemorial and food varieties have not been any different; there are vegetarians, non-vegetarians, eggetarians and vegans. Meat has been part of the staple human diet since as long as existence can be pondered over, with different cultures consuming it in various ways. 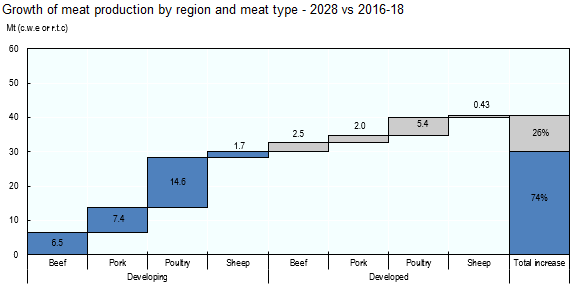 Growth of meat production by region and type (Source: OECD)

But, with changing times and evolving awareness of sustainable environment, the concept of animal slaughter and consumption is undergoing a paradigm shift. Acknowledging the progress in technology, alternatives are deployed with a twin target of animal security without restrictions on human consumption. A revolutionary movement in this regard is the Clean Meat Revolution, which is one of the hot topics across the globe.

What is Clean Meat?

Replaceable with terms like lab-grown, in vitro, or cultured meat, clean meat is the form of meat which is part of cellular agriculture and is produced in a cell culture, rather than in an animal’s body. Technological techniques like tissue engineering and regenerative modes are used to prepare clean meat.

The concept gained fame when Jason Gaverick Matheny co-authored a seminar paper on the topic, which spurred in vitro meat research. The first live example of this innovative thought process was demonstrated by Mark Post, a professor at Maastricht University, in 2013, through a burger patty grown directly from cells.

Cultured meat is believed to be cleaner than meat from slaughtered animals considering both aspects of hygiene and environmental considerations. It also showcases the growing conscience of the consumer when it comes to animal protection and conservation.

What is the significance of Clean Meat?

With the Clean Meat Revolution taking over the global industry, let us look at few associated advantages:

Even though there are benefits that can be reaped out of the Clean Meat Revolution, the area does not come without any drawbacks. Firstly, the acceptance of an all-together different food form is questionable. Secondly, prices may be hiked and unaffordable till the market picks up the concept. Besides, Technological challenges can never be forecasted. Some market experts believe that the production might be tampered with attention of fats and other components that may not be healthy in the long run for consumption.

What do the statistics say about meat across the globe?

According to an outlook for 2019 till 2028 by the Organisation for Economic Co-operation and Development, the Meat demand is most likely to be relatively strong in the Americas; but with the trigger of low incomes constantly spurring, the meat consumption would be constrained in Sub?Saharan Africa. The strong demand for animal foods products would expand production in the livestock sector through larger herds. In 2018, the Production of bovine, pig and poultry meats increased in the Lain America region. 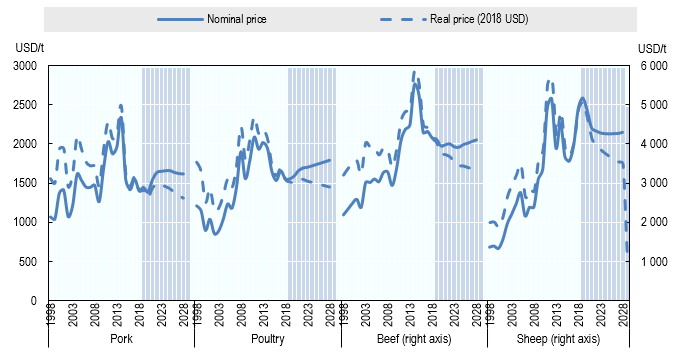 A recent report by the United States Department of Agriculture on Livestock and Poultry, published in April 2019, stated that China would be ruling the world meat imports, with an expansion expected in 2019, in beef, pork and chicken meat.

Looking at the exports and production side, Brazil, the US and European Union are expected to witness increase in Chicken Meat and Pork in 2019. Whereas for Beef, Australia is likely to witness a dip.

The Clean Meat Revolution across the world:

As can be gauged by now, there is no stopping the world from consuming meat and its products. The new buzz around this space, of cultured meat, can prove to be a positive trend, if made rampant and accepted.

There are companies like Memphis Meat, Clean Meat, Aleph Farms, SuperMeat and Mosa Meat who are already in the game and trying their bit to make a difference in the society that is getting aware of animal cruelty and climate change.

The US Department of Agriculture (USDA) and the Food and Drug Administration (FDA) recently approved the production of cell-cultured food products derived from livestock and poultry. Both the regulatory bodies would oversee the production and labeling of food products undergoing the process; looking at 2019 as an optimistic year of the first market introduction of the concept.

However, it is believed that Mainstream markets may take at least 5-10 years to adopt the concept of cultured meat. The first successful launches are expected in 2021-2023.

Presently, biggest players of the game include Beyond Meat and Impossible Burger.

Clean Meat in the Aussie Land:

The rapid spread of the clean meat revolution has tapped the Aussie land too; and the country understands the regulations by the USDA and the FDA along with the growing world market in this sector.

The Aussie land will have to up its game and perform public health and safety checks on in-vitro meat products, imported under trade agreements. It should be noted that farmers and agriculture remain to be a significant trusted group of the country.

Brands like Impossible Foods and Beyond Meat, which are based out of the US and are plant-based supplements to food, are easily available in the supermarkets in the Aussie land. A few products are also sold in flights across ANZ. Woolsworths (ASX:WOW) supermarkets and Coles (ASX: COL) are amongst the famous everyday names that have related options on their shelves.

Market experts believe that it would take a while for the domestic lab-grown meats to hit the supermarkets of the country, despite the global advances being made in its realm. On a good note, the amount that the Australian crowd has spent on the products available presently, depicts that the future is bright for Clean Meat Revolution in Australia.

In the light of this context, let us take a look at two Aussie companies, who are part of the Clean Meat Revolution:

With the aim to solve issues circling public health and sustainability, Food Frontier is functional across the APAC region to enhance the growth of plant-based and cell-based meat. The company believes that one must reduce their dependency on the industrial production and over-consumption of livestock, and hunt for alternative opportunities. For this reason, the company works with the industries, government and innovators to work towards these alternatives, offering support, marketing and research.

An NPO by classification, the Clean Meat News Australia was established in 2017 and aims at delivering news and information about cellular agriculture and clean meat production.

In its latest coverage, the company expressed that the future of food is most likely to be entirely different than the present times, given the meat and seafood production in labs or via 3D printers that would be nutritionally augmented for every individual.